Given the wild success of the Naruto franchise, it isn’t a mystery why the Boruto series has gained so much popularity. With a series this beloved, it’s hard to let go of characters and the universe they’re a part of.

Fans always want to know what happened next, how the lives of their favorite characters panned out, and what fate they met.

The Boruto series was the perfect answer to satisfying that itch we all had after the culmination of Naruto Shippuden.

The series has been devoid of any particularly shocking or gruesome deaths for the most part– that is, until a recent, devastating loss.

Unfortunately, Mikio Ikemoto has proved he isn’t afraid to kill off any of our dearest characters. That being said, here’s a list of the major character deaths in Boruto so far:

After surviving Ten-Tails’ attack during the Fourth Great Ninja War, Ao seemingly didn’t return to the Hidden Mist Village, instead becoming an Outer member of the Kara.

In a raging battle of ninjutsu versus ninja technology, Ao was defeated by Team 7 in Chapter 22 and was later killed by Kashin Koji, another Kara member.

Boruto nearly killed Ao himself but chose to show mercy, refusing to finish him off. However, Kashin Koji had other plans for the former Mist Village hero. Ao was crushed under the weight of Koji’s massive Boiler Toad.

As he died, he pushed Boruto away with a jutsu, saving him from being crushed as well and dying a true ninja.

Deepa was one of the most twisted members of the Kara and was nearly unbeatable the first time Team 7 encountered him.

Later, in Chapter 181, Amado regenerated Deepa’s brain. However, after gaining intel on Victor’s plans, Jigen deemed him useless, and Amado dissolved the rest of Deepa’s remains.

Team 7 and Kawaki encountered Boro while he was guarding Naruto after Jigen sealed him away. Boro’s regenerative skills and his Dark Mist ninjutsu made him quite the formidable foe.

However, the young shinobi quickly figured out how to counter Boro’s ninjutsu and his regeneration. Mitsuki was able to harvest the antibodies against the viruses in the Dark Mist from Boro’s blood and share them with the others.

With information from Kawaki about the Kara members’ scientifically modified bodies, Sarada was able to locate Boro’s core with the Sharingan and destroy it with Chidori.

Momoshiki and Kinshiki interrupted the Chunin exams while looking for Nine-Tails to absorb its chakra and cultivate the God tree.

After kidnapping Naruto, Momoshiki was met by Sasuke Boruto and the five kages who pressured him into absorbing his comrade Kinshiki.

Finally, in Chapter 9, Naruto lent Boruto his chakra to create a massive Rasengan, which killed Momoshiki.

Following the battle, Momoshiki placed a Karma seal on Boruto, so he isn’t truly dead. Momoshiki has taken control of Boruto’s body a couple of times.

Jigen was the vessel of Isshiki Otsutsuki. Once Isshiki was reborn in his body, Jigen ceased to exist. Jigen died in Chapter 47 when Isshiki was forced to reincarnate in his body during the fight against Kashin Koji.

Much of Isshiki’s abilities were suppressed while in Jigen’s body. When Koji summoned real flames, Jigen couldn’t absorb them since they were not chakra-based. Since he could barely keep up with Koji, Isshiki was forced to fully take over Jigen’s body, killing him in the process.

Isshiki Otsutsuki, the series’s primary antagonist, died in Chapter 53 after failing to reimplant Kawaki with a Karma seal.

Following the mutiny by Kashin Koji, Isshiki was forced to reincarnate in Jigen’s weak body. However, Jigen’s body couldn’t contain Isshiki’s massive chakra, and he had little time to find Kawaki and place Karma on him.

In his final moments, Kawaki tricked Isshiki into placing the Karma on one of his shadow clones till Isshiki’s time ran out and his body crumbled away.

In a shocking turn of events, Chapter 55 saw the death of Kurama in a final attempt to take down Isshiki Otsutsuki. Kurama’s death was devastating for fans and surely even more so for Naruto, who lost his oldest companion.

Kurama died after Naruto used Baryon Mode, which ate away at Kurama’s chakra to create the energy needed to defeat Isshiki. The technique was a final ace up his sleeve and gave Naruto an immense temporary boost.

Naruto himself was ready to die, and it seemed that he would, but Kurama hid the fact that Baryon Mode would result in his death rather than Naruto’s. 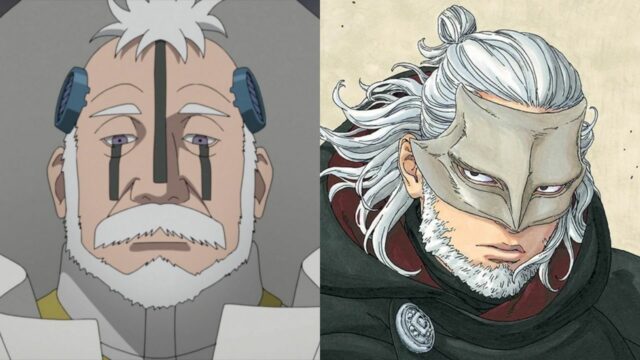 Who Is Boro in Boruto And Can He Fight on Par With Koji?