The Demon Girl Next Door or Machikado Mazoku is an anime based on a four-panel manga series written by Izumo Ito.

The popular anime with a whole twist on the magical girl trope and demon girls, the anime adaptation is getting a sequel!

Let’s discuss the release date of the long-awaited second season.

According to Houbunsha’s advertising, the cover of the October issue of Houbunsha’s Manga Time Kirara Carat magazine reports a second television anime season for The Demon Girl Next Door.

The first season was aired from July to September 2019 on TBS and BS-TBS and streamed by HIDIVE online.

The website has released a visual and PV as an announcement for Season 2, but no further updates were given. We can estimate that the sequel may be released in 2021 at the earliest.

When we get information regarding the release date of Machikado Mazoku 2, we will update this article.

Let’s get into the nitty-gritty details of this anime.

The Demon Girl Next Door is a fun and fresh anime that gives a different perspective on ‘the magical girls fight demons’ genre.

Let’s see what it takes to make a ‘Machikado Mazoku Season 2.’

The series was originally a four-panel manga, written by Izumo Ito, serialized in 2014. By 2020, it collected five tankobon volumes.

J.C.Staff adapted the first two volumes into a 12-episode anime adaptation. Which gives the makers of the show plenty of material for the sequel.

Sadly, the fans state that the anime is very underrated due to the other shows that sprung up in the same season.

Let’s see what else the fans have got to say about this atypical anime.

Although there are many typical anime tropes involving magical and demonic girls, like Magical Girl Kurumi, it’s good to see anime not falling under isekai category.

The Demon Girl Next Door is surprisingly a slice-of-life anime that focuses on the relationship between the demon girl and her enemy/ally magical girl.

The anime is charming and has depth, plot, and lore mixed in with the CGDCT stuff. It’s well-thought-out, and it’s no wonder the sequel is largely anticipated just days after its announcement.

There are different types of anime released in the past few years, but this one makes us root for the weak Shamiko because of her cuteness!

Why is the anime getting a sequel announcement after a year?

Last year, it was announced that the manga was going on a hiatus due to Izumo Ito suffering from autonomic ataxia (dysfunction of parts of the nervous system).

Ito tweeted out the news and apologized for the delay in content.

[Notice] Machi Kadomazoku suspension No. 2 will be suspended until the year-end release. See the image below for details. We apologize for any inconvenience caused. #まちカドまぞく

In the first half of 2020, Ito resumed the Machikado Mazoku manga after the hiatus. We hope she takes rest and recuperates her health in a good time.

Let’s take a look at the visuals which might be a part of Season 2.

The official twitter account of the anime’s staff tweeted a visual to announce the production of Season 2 of Machikado Mazoku.

Thanks to everyone’s support, The second stage of “Machikadomazoku” TV animation has been decided! Stay tuned for the second term

We can speculate that they will adapt the remaining manga volumes for this season.

The covers feature the main lead, Yuuko, with Mikan and Momo, respectively.

The official announcement was released by TBS announcing that Momo and Yuuko will be returning on the silver screen very soon.

Now that we have seen everything, what will the next season be about?

Now known as Shadow Mistress Yuko (or ‘Shamiko’), she must restore her demon clan’s honor by defeating Momo, the local magical girl.

The second season will begin where the first left off. However, Shamiko and Momo must join forces to track down a certain missing magical girl.

The animation by J.C.Staff is quite decent. It looks visually very good and nothing over the top.

The art helps in bringing the essence of the anime out. The art style is very vibrant and warm; it matches the low-key life of Shamiko with cute aesthetics.

The opening song, Machi Kado Tangent, was sung by Konomi Kohara and Akari Kito. It is very hoppity-bobbity music, heart-warming, and unskippable.

The OST isn’t outstanding on its own, but the visuals that go with it are really cute and fluffy.

Fans can’t wait to see their adorable Shamiko on the screen once again. Although the voice cast for Season 2 is not announced, they wish Konomi Kohara to voice Yuuko again.

No one else can do the demon girl justice!

Since the sequel was just announced, the audience is gearing up to re-watch the series again to get ready when Season 2 rolls by next year.

All are hoping the best for the new demon girl to become the strongest next season! Speaking of demons, Iruma-kun is yet another anime getting a sequel.

One day a high school student, Yuuko Yoshida, wakes to see that she has grown demonic horns and a tail.

Dazed and confused, her mother reveals a dark family secret: her family is descended from a Dark Clan that was banished to live powerless and destitute by their mortal enemies, the magical girls of the Light Clan.

The only way to lift their ancestry’s curse is for Yuuko to find a magical girl, murder her, and splatter her blood all over her ancestor’s Demon God statue.

Fortunately for Yuuko, a magical girl saves her from being run over by an oncoming truck. Unfortunately, Momo Chiyoda happens to be Yuuko’s classmate at Sakuragaoka High and is much stronger than her in strength and endurance.

Taking pity on her wimpy assailant, the magical girl agrees to train Yuuko and unlock her dormant powers. Now, Yuuko must rise and defeat her generous frenemy to save her family from the terrible grip of poverty.

Watch The Demon Girl Next Door on HiDive

The following will most probably return as the cast and staff members for Machikado Mazoku Season 2:

9. About The Demon Girl Next Door

Yuuko Yoshida is a 15-year-old girl who awakens one morning with demonic power and is tasked with defeating a local magical girl. She has horns and a tail, but truthfully less power than an ordinary girl. She struggles to lift the ‘curse of a 40,000 yen per month living.’ 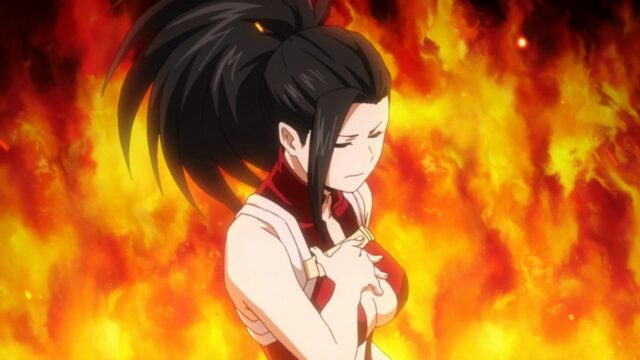 Who do you think has a crush on Momo? (It’s not Todoroki)