Saitama is the strongest character yet seen in One Punch Man and we have reason enough to believe that he may never be surpassed.

However, we have never seen him use all his power even against the most terrifying enemies making many of us question his humanity. Has Saitama already surpassed humanity? Has he become a God? Will his power increase even further after consuming a monster cell?

Saitama is neither a God nor a Monster. He is simply a human who has broken through his limiters and gained superhuman power. One Punch Man also has never consumed raw monster cells or transformed in that manner.

He has powered up through effort alone hence negating the theory of him being a monster.

Boros was responsible for the destruction of several planets and civilizations. Saitama defeated him without much effort. So yes, he is god class, but not a god.

Is Saitama a God?

Saitama is not a God and is most certainly human. He is a normal person who became immeasurably strong through his dedication and training to become a hero.

If he were some sort of god, that would ruin the inspiration of a man achieving his dreams through his own hard work.

Boros Is accounted for the destruction of several planets and civilizations. Saitama defeated him without much effort. So yes, he is god class, but not a god.

Where does his power come from?

As explained in the manga, every living being has a limit to how much they can grow. Having too much power puts a burden on the body of the wielder. However, Saitama pushed himself so much that he passed through his limits and removed his limiter.

Humans that desire a transformation deeply, become monsters. They do this either through an anomaly in their cells or due to their environments. Others do so using chemicals and monster cells.

All of this, however, has nothing to do with their limiter. Even though they become something else and that in turn grants them powers, they still do have limits.

Saitama on the other hand, had a normal birth, a normal life. Through effort alone, he pried open the doors to his limits and broke his limiter.

That is the secret of Saitama’s power according to the Professor Genus Theory.

Is Saitama a Monster?

Saitama is not a monster but a human. It’s pointed out multiple times that he’s human and that he has never transformed into a monster.

Even Dr. Genus has pointed out that there’s a difference between removing one’s limiter like Saitama did and transforming into a monster through either monster cells or conviction.

Saitama’s strength is monstrous, but he’s managed to keep his humanity especially since he believes that training is the only way to gain true power.

What will happen if he eats a monster cell?

Monster cells would not affect Saitama at all since Gouketsu specifically mentioned that human limitations can be surpassed when you become a monster, since Saitama doesn’t have a limiter there wouldn’t be anything for the cell to change.

WATCH ONE PUNCH MAN ON NETFLIX

Another reason is that as stated in the Manga, there’s no effect if the user doesn’t want to eat it.

It implies that the ‘monsterfication‘ stems from the user’s desire to be stronger, not simply the act of consumption. As Saitama doesn’t want to be stronger at all, it might end up having the opposite effect.

Saitama, an unassociated hero, hails from the metropolis of City-Z and performs heroic deeds for his own entertainment. He has trained himself to the point where he broke his “limit” and can effortlessly defeat any opponent with a single punch while slaying monsters the same way. 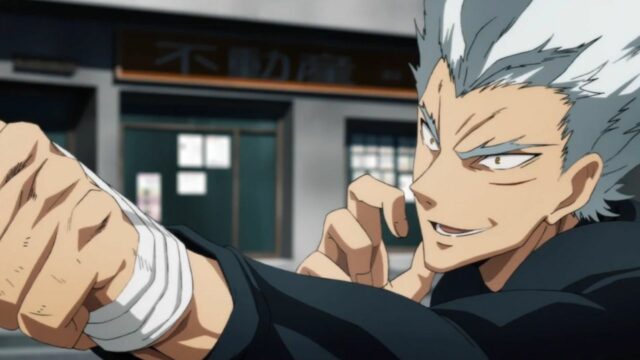