Boruto is hoping to bring back one of the Hokage child’s most dominant opponents – the Sand Villages’ Shinki. As we have observed, all the new generation of children have inherited their parents’ skills. This is the same with Shinki, even though he happens to be the adopted child of Gaara. Garra is the current Karekage of Sand Village. It was a startling event when Shinki’s ability turned out to be based on the essence of Garra’s ability. Shinki’s powerful ninjutsu echoed the presence of Gaara.

Recently, Twitter User- Organic Dinosaur shared the scan and translation of the Uzumaki Report #96, which is a Japanese distribution that gives sneak peeks at the up and coming events of Boruto:

There is a high possibility that Boruto and Shinki will come face to face. Shinki is the strongest character in the new generation. and his ninjutsu is awesome and extremely effective. Shinki has the ability to control ” Iron Sand ”  and his popularity is enhanced thanks to his coat of iron sand which makes him look dope! He uses his coat as a weapon and this resembles Gaara’s early days when he used to use his gourd of sand as a weapon. Although Shinki is Gaara’s adopted son, he comes across as Gaara’s biological son in more ways than one.

The history of Konoha and Sand Village is not good. They have always considered each other as enemies. The situation changed when Naruto and Gaara chose the path of peace and accepted each other as friends. Another important point of observation is when the 5 great nations assembled together during the confrontation with Madara. Although the Sand Village has always been something of a mystery, it always comes first when Konoha needs backup. 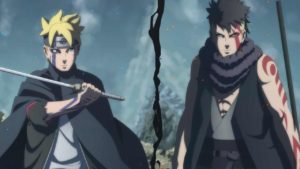