If you even glance at one episode of Solar Opposites, you will notice its resemblance to the critically acclaimed series Rick And Morty. The resemblance is pretty natural- the creator of both the shows are Justin Roiland. While the two shows share many things, Solar Opposites cannot be compared to Rick and Morty.

Significantly different from Rick And Morty, Solar Opposites is a great show that retains most of the elements of Roiland’s typical humor.

Solar Opposites will be a welcome watch for Rick And Morty fans who are tired of the long breaks between each new season of the show.

Korvo, Terry, Yumyulack, and Jesse are an alien family. After their planet Schlorp gets destroyed by an asteroid, their spaceship crashes on Earth. Korvo, the churlish leader of the family, wants to repair their spaceship and leave Earth.

But Terry is awe-struck by humanity and Earth. Stuck on Earth for some time, they decide to try and adjust to human life.

Their children, Jesse and Yumyulack are forced to go to high school. They are teased and alienated by the students and teachers. Yumyulack shrinks all those who are mean to them and keeps them on a Wall in their bedroom.

The replicant siblings try to figure out and analyze human behavior through their shrunken collection of human beings.

It is revealed that the Pupa, their pet, is supposed to grow and evolve into a creature that will destroy Earth and create a Schlorp-like planet in its place.

But the alien family doesn’t find it easy to fit in with human beings. Every time they encounter a problem, Korvo urges the family to pack up their stuff and leave “the already overpopulated rock” as soon as possible.

Solar Opposites is definitely not like Rick And Morty. It has the same humor and similar animations courtesy the creator, but that is where the similarities end.

If you watch Solar Opposites as a replacement for Rick And Morty, chances are you will be disappointed. It is nearly impossible to top Rick And Morty and the show does not try to do that either.

Solar Opposites has enough science fiction for science nerds but its format is more like a regular sitcom. Every episode has two plotlines. One revolves around Korvo trying to motivate Terry into repairing their spaceship and Terry being involved in some earthly activity.

They find themselves caught up in some weird experiment this way. Like when Terry finds a tv show about aliens called Funbucket. The Schlorpian family becomes tired of human beings and looks for the alien. But soon, they realize that it is fictional. So, they create their own Funbucket.

The second part of the plot revolves around the replicants- Jesse and Yumyulack. Their adventures at school form a major part of the show.

In fact, the most interesting story arc in Solar Opposites is related to Jesse and Yumyulack. The human beings they shrink and keep on their Wall create a society of their own. They subsist on the scraps of candy that Jesse provides them. The Wall becomes such an appealing part of the show that it gets an entire episode to itself.

Unlike Rick And Morty, most of the adventures in Solar Opposites takes place on Earth. The Schlorpian family’s life is a classic fish out of water scenario, which provides a lot of funny sequences.

What the show does retain from Rick And Morty apart from an uptight and angry leader, is the straightforward brutality. It does not censor the gory parts or for that matter, swear words. This unfiltered nature of the show makes it funny and thought-provoking.

Korvo is voiced by Justin Roiland in Solar Opposites. Not only is the character of Korvo pretty similar to Rick Sanchez, but the voice acting is also pretty reminiscent of the cranky scientist.

The most interesting characters are from The Wall. The Duke is the despotic ruler of the society that the shrunken humans have built in The Wall. He controls the food resources of the community. The Duke is voiced by Alfred Molina.

Andy Daly voices another interesting character on The Wall called Tim. He was shrunk by Yamyulack just for wearing a red shirt. He plays an important role in The Wall community and is the leader of the resistance that wishes to dispose of The Duke from power. 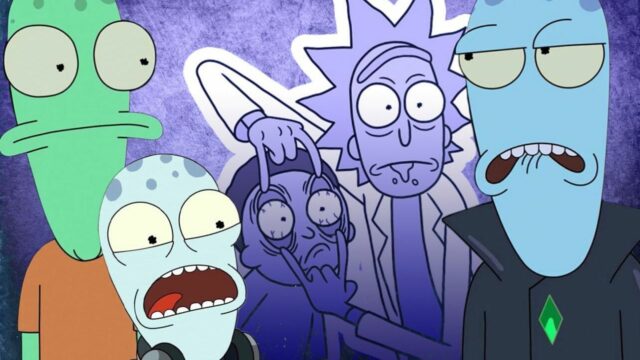