All Might, the number one hero, fell from his position after transferring One for All to Midoriya. After becoming fatally wounded after the fight with All for One, All Might lost his former prowess.

However, his transformation back to his muscular state has left many fans wondering if that is true.

At one point in the series, All Might mentioned that he gains his muscular form because he’s flexing his muscles just like guys at the pool do. Now, that he has lost his muscle density and physical build, he can’t transform/buff up anymore.

Whether this was for gag purposes or not, this is the only explanation given to us regarding his transformation.

There is a theory that All Might was initially thin. However, after receiving One for All, he trained and built up his body to the muscular state to handle 100% of the power.

Therefore, when he loses One for All, he is not able to maintain it any longer and returns to his state before he had this power and turns skinny.

All Might was initially thin, as shown in the manga. However, after receiving One for All, his body was trained, and it became big enough to hold all of the power. His muscles were trained and ready to receive 100% of One for All and, therefore, resulted in his buff muscular form.

However, All Might’s battle with All for One caused his stomach to collapse and his body to shrink over time. Since All Might becomes muscular when One for All floods his muscle fibers, his body returns to what it was, aka the thin state, after getting wounded by All for One and giving Deku his powers.

I. Which is his original form?

All Might’s original form stands as a direct contrast to his superhero form. Compared to his commonly seen muscular and well-defined physique, All Might looks drastically skinnier and angular in his true form.

The loss of the extreme muscle mass, that occurs when All Might revert back to his original form, gives the illusion of him having slightly longer limbs than the usual person.

All Might’s abnormally scrawny figure is due to the damage his body sustains from ‘All For One.’ He’s said to have gone through multiple surgeries in order to reduce the effects of his injuries.

In conclusion, All Might was thin before acquiring One for All. That can be considered his original form. But after gaining that power, he trained hard to build up his muscles and body to hold and control all 100 percent of it.

Because this transformation was a result of training, this can also be considered his original form.

READ:  Black Clover Teases Its Own All Might from My Hero Academia

All Might can still transform, albeit only for a short time. The only reason All Might can sometimes return to his buffed-up state to impress and give hope to civilians is because of flexing his muscles.

Since his body had once been muscular, by flexing them for a bit, he can return to that state. He just can’t keep it up for a long time.

Eri’s quirk is Rewind. Shota Aizawa suggested that her quirk can even rewind the bodies of those who have lost their Quirks and restore them.

There are many fans of the series who believe that All Might could be restored to his former power if Eri trains hard to refine her quirk. However, the chances of this happening are very low.

The reason for this is that All Might has not lost his quirk but transferred it to Deku. Because of this, there is no way for him to gain it back unless Deku wills it.

READ:  Is All Might dead or going to die?

Another reason is that All Might’s story has already ended. My Hero Academia is about Deku’s reach to the top, and restoring All Might will conflict with this goal. 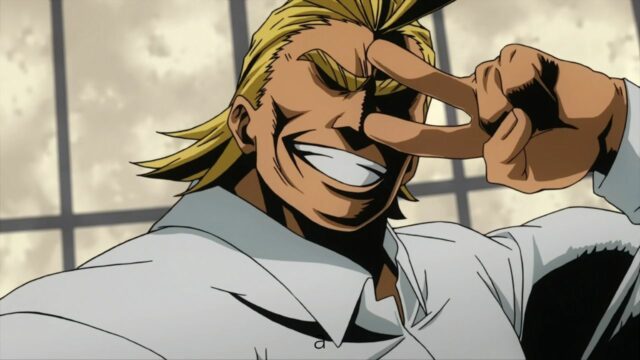 All Might’s Original Form and Quirk