Geek-o’s HBO Max has the best sci-fi surprise for y’all this September. Raised by Wolves is coming soon to HBO Max and now, a new trailer has been released for the Ridley Scott sci-fi series.

“Raised by Wolves centers on two androids tasked with raising human children on a mysterious virgin planet. As the burgeoning colony of humans threatens to be torn apart by religious differences, the androids learn that controlling the beliefs of humans is a treacherous and difficult task.”

Treacherous it is! The highly-anticipated series will premiere on September 3 on HBO Max.

Scott has even directed the first two episodes of the 10-episode series, marking his television series directorial debut for American audiences.

Mother was programmed to protect everyone after Earth had been destroyed. When the big bad wolf shows up, she is the one we must trust.

While that is one dubious tagline, the basic premise revealed during development is that the story involves two androids serving as Mother (Amanda Collin) and Father (Abubakar Salim) figures on a strange virgin planet.

They are programmed to raise human children to rebuild the population. However, the people of the emerging colony end up with stark religious differences within themselves.

So, the androids discover that controlling the beliefs of humans ain’t all clowns and unicorns – and neither is this off-putting trailer.

It appears to be story time, except this one might give them nightmares.

“The Earth was destroyed by a great war, I was programmed to protect you. And now we start again.”

Then Mother launches into a creepy retelling of the classic children’s tale Three Little Pigs amid flashing images that become increasingly strange and violent.

What’s Mother doing crouched and howling by a giant pit?

“The big bad wolf she was talking about? That’s her,”

The sci-fi series coming to HBO Max is courtesy of none other than Ridley Scott (Blade Runner, Alien and others).

Created by Aaron Guzikowski, who also penned the script for the 2013 thriller Prisoners, the ten-episode series was initially a straight-to-series order for TNT but moved to HBO Max last October.

“I’m always searching for new frontiers in the sci-fi genre and have found a true original in Raised by Wolves— a wholly distinct and imaginative world, full of characters struggling with existential questions. What makes us human? What constitutes a family? And what if we could start over again and erase the mess we’ve made of our planet? Would we survive? Would we do better?”

Aren’t we all intrigued by these questions? Comment below and let us know if you will follow HBO’s Raised By Wolves this fall. 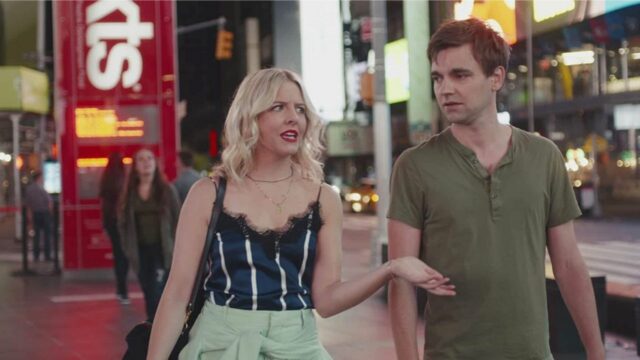