It’s been more than 5 long years since the U.A. traitor was first mentioned. And the thought of a betrayer still lingers on every MHA fan’s mind!

Who are they? What are they up to?

These are only some of the burning questions we need answers to ASAP! And to top it all off, My Hero Academia (MHA) is in its Final Act since Chapter 306!

We’ve waited this long, but so far, there still has been no clear-cut hint verifying the identity of the U.A. traitor!

Henceforth, allow me to enlighten your minds on some noteworthy plot points which fans like us must not forget about, especially in the Final Saga of MHA!

Does U.A. have a Traitor?

In Chapter 83, he firmly stated, “There is a mole among us.”, to which fellow teachers like Snipe, Midnight, and Principal Nezu responded sourly and defensively.

Ever since this reveal, fans have established in their minds that U.A. High does have a traitor and that their identity is still relevant in the series.

It just so happens that mangaka Kohei Horikoshi-sensei is strongly keeping this mysterious being under wraps.

What Happened to U.A. Traitor?

Since we don’t know either their names or Quirks, we also don’t know what has happened to them at this point in the manga.

But many fans have been suspecting Yūga Aoyama (“Can’t Stop Twinkling”), Denki Kaminari (“Chargebolt”), Tōru Hagakure (“Invisible Girl”), and even Shōta Aizawa (“Eraser Head”) ever since Present Mic brought the U.A. traitor during the faculty meeting!

But let’s be real: Yūga, Denki, nor Tōru don’t have the heart to betray their friends whom they have spent hero classes with for over a year!

And Shōta (or “Dad Aizawa” as fans teasingly call him) loves his students too much! He wouldn’t betray his students even if he was offered the resurrection of one of his best friends — Oboro Shirakumo (“Loud Cloud”)!

Nor would Shōta betray U.A. co-workers he is close with, like Present Mic, Vlad King, Midnight, and All Might!

No. Horikoshi-sensei is a masterful planner! That’s why he left the breadcrumbs to scatter by themselves on several manga chapters so that long-time MHA fans like us would have a hard time detecting the U.A. traitor!

Who are the Other U.A. Traitor Suspects?

Some people speculated that it’s Mei Hatsume — the crazed inventor who debuted during the U.A. Sports Festival!

Her love for Heroics’ Supports Items knows no bounds! And as an inventor, she can betray U.A. so she can get Detnerat’s attention and ensure her gadgets sell well on the market!

But so far, that’s the only motivation I can see on Mei Hatsume if she really is indeed the betrayer. Other than that, she’s one of the most lovable characters of the series who brings joy and laughter to fans and friends alike!

The other suspicious character that has been on fans’ minds is Principal Nezu. He’s literally a “rat” for good reasons because his role all along is to misdirect fans and trick allies into thinking he’s a trustworthy character!

While it’s true he proposed the dormitories so U.A. can probe for the traitor quietly and without the police’s help (refer to Chapter 98), some of his actions were still suspicious.

First, he deterred All Might to accompany Eraser Head and Thirteen during the U.S.J. “Rescue” training course. His excuse at that time was because All Might was too exhausted. All Might exceeded his 3-hour limit in using One for All to save civilians that morning.

Similarly, Principal Nezu responded to Fumikage Tokoyami (“Tsukuyomi”) that it’s his “intuition” as a mouse that enabled him to foresee Tomura Shigaraki’s Decay Quirk to evolve to a terrifying degree.

Because Principal Nezu is one of the people receiving classified information (such as disintegration rate of Tomura’s Decay Quirk), he was able to install over 3,000 sophisticated metal plates on U.A. campus.

This strategy a great defense! It effectively transformed the heroics high school into a mechanical, moveable, and dystopian Tokyo-3 city like in Neon Genesis Evangelion (as Denki Kaminari mentioned in Chapter 323)!

I could guess all day who the traitor is from Mei, Principal Nezu, Denki, Yūga, Tōru, or Shōta. Theorizing them as traitors might be far-fetched. But with everything happening in the manga at this point, anything crazier can still happen!

On the other hand, it’s also possible that there is no traitor at all!

And as Horikoshi-sensei self-inserted himself as Shōta Aizawa, the traitor plot point could all just be a part of his rouse!

In the same way, Shōta deceives his class on school expulsions, Horikoshi-sensei could also be doing the same thing as a mangaka: mislead readers into thinking there is a U.A. traitor when there’s really none!

“It’s all just a big rouse!”, as Aizawa-sensei would say it.

As we’re only manga readers and anime viewers of this fabulous series, we can only speculate at best that U.A. has no traitor — for now.

My Hero Academia is a Japanese superhero manga series written and illustrated by Kōhei Horikoshi. It has been serialized in Weekly Shōnen Jump since July 2014, with its chapters additionally collected in 31 tankōbon volumes as of September 2021.

It follows a Quirkless boy, Izuku Midoriya, and how he was backed by the greatest hero alive. Midoriya, a boy who has been admiring heroes and their ventures since the day he was born, came into this world without a Quirk. 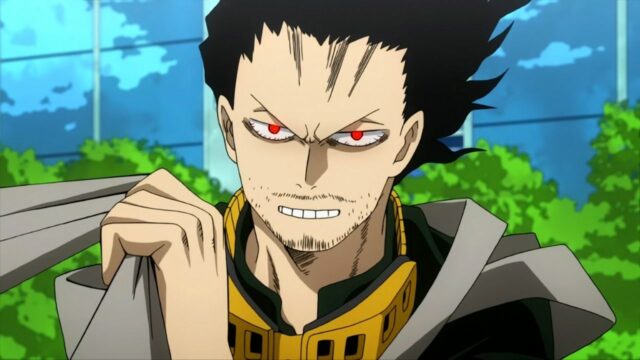 What Is Shōta Aizawa’s Scarf Made Of? What Is It Called? How Does He Control It?

Will There Ever Be Romance in My Hero Academia? Exploring Popular Ships!