Tokisaki Kurumi was called ‘the best girl’ by her fans when she first greeted the silver screen back in 2013.

Though she is a tragic villainess who is beyond redemption, her number of admirers refuse to decrease.

For the first time, the audience will get to see the ‘greater picture’ from her perspective in the movie Date a Bullet: Dead or Bullet.

The official announcement stated that it is a prequel to the Date a Live events, and will release this August.

Let’s discuss the release date, visuals, and trailer breakdowns of this movie.

The official website of the movie announced that there would be a 2-part film adaptation by Geek Toys.

Release date of the Date a Bullet movie is decided. The visuals of the second part will also be released. The first part is called Dead or Bullet. Broadcasting starts on August 14. The second part Nightmare or Queen. Event screening begins on November 13

The movie is directed by Jun Nakagawa, script by Yuichirou Higashide (creator of the spin-off series), and character designs by Naoto Nakamura.

Now that the fans know that there is a movie releasing in just a few weeks, let’s answer some questions regarding the issues the franchise has faced so far.

I. Cause of Delay

The Covid-19 virus is a threat that significantly impacted the anime industry. Date a Live was one of the ‘victims.’

Date a Bullet part 1, Dead or Bullet has been rescheduled to August 14, 2020, just two weeks from now!

There has been an ongoing issue with the Date a Live franchise and its animation studios. It has gone through 3 studios like dirty laundry and even now hasn’t exclusively stuck to one.

Dead or Bullet is no different; it is animated by a fourth animation studio, Geek Toys. With so many hands working on a project, it’s no wonder that the results end up not up to par with the fans’ expectations.

However, Kurumi’s past is in no way getting affected by this chaos. Read ahead to get to know the exact details.

The screenplay is written by the spin-off writer himself, Higashide.

The plot of the movie follows an amnesiac young girl called Hibiki Higoromo, a.k.a. Empty. She wakes up in the neighboring world, where she encounters Tokisaki Kurumi.

To kill the mysterious girl, Kurumi leads Empty to a school. When arriving at the school, several girls, known as semi-spirits, gather together. ‘Now, let’s begin our battle (date).’

The movie focuses on Kurumi’s past, and it all happens before the events in Date a Live.

Everyone knows the Big Fight would be between Kurumi, our heroine, and the antagonist, White Queen.

But did you know? White Queen is also known as White Kurumi. Her dominant personality is Kurumi’s childhood friend, Sawa Yamauchi.

There seem to be many parallels and mysteries surrounding the two.

Fans couldn’t be more excited for a full-blown catfight between the spirits and their hunters.

There seems to be a growing interest movie due to the different art style that is closer to the spin-off novel illustrations.

The visuals and the trailers created on the designs by NOCO and Nakamura have gained immense curiosity from the viewers. Let’s check them out now.

The official site has released visuals specifically for Date a Bullet.

The Official Twitter also posted a visual of Kurumi holding a gun amidst a fallen building on fire.

Two more weeks until the Date a Bullet: Dead or Bullet airs

The official site has released two clips so far, both of which are similar. The first clip was a teaser and announced the release date for Date a Bullet: Dead or Bullet.

The second is a more thorough version of the teaser with the release dates for both the movies shown at the end.

The first video opens up with Kurumi asking everyone to ‘Start their date.’ It shows a montage of the new girls with Hibiki and White Queen and ends with the date of release, August 14, 2020

The second trailer gives details of the new characters, like their voice cast and names, as they team up.

With Kurumi lamenting where spirits like would go, Hell or Heaven, Hibiki’s new voice enters with rock music in the background. We hear White Queen interacting with Kurumi as if they have some sort of history.

A wish to revive an old friend is revealed in the video, and it ends with the announcement of part 2 releasing in November 2020.

Now that we know the movie is going to be ‘beautiful and visually attractive,’ let’s discuss the staff creating it.

Let’s look into the technical details of this upcoming anime to check what influences the production of ‘Date a Bullet: Dead or Bullet.’

The studio is relatively recent, founded in 2017, and has made other animations like Plunderer, Hensuki, and RErideD.

Though the response to the animation for these anime is very lukewarm, the backgrounds and visuals don’t match the characters, but other than that, the fight scenes are okay-ish.

It is shocking to say that studios’ constant changing hasn’t affected the animation of this particular movie.

The art is likable by most people as it is done by NOCO and different from the novel art by Tsunako. The studio, to the fans’ surprise, has done a great job of matching the spin-off art style.

The characters’ movements are fluid, and the characters look very attractive and better than the original anime.

Nakagawa Jun has directed Plunderer, High School Fleet (Movie), and RErideD. He was also an episode director for Killing Bites, Naruto Shippuden, and Saki Episode of Side A.

Now he is working on the Date a Bullet movie series.

The theme song information was released on the site.

The opening theme for Dead or Bullet, and Nightmare or Queen has been composed and arranged by Sakabe (Digimon, Ookami Shoujo to Kuro Ouji).

The title of this instrumental theme is Infermata. The ending theme, Only Wish, will be performed by the female vocalist, Luiza.

Read ahead to understand more about this world and exactly what Kurumi is, a Spirit!

Shidou Itsuka is a high school student who lives with his younger sister, Kotori. When a spatial quake threatens the safety of Tengu City, he rushes to save her, only to be caught in the resulting eruption.

He discovers a mysterious girl at its source, who is a Spirit, a supernatural entity whose appearance triggers a spatial quake.

He gets involved in the fight between the girl and the Anti-Spirit Team, a ruthless strike force to annihilate Spirits.

But gets forcibly recruited into being a Ratatoskr, a third party that believes in saving the spirits, led by Shidou’s little sister!

He now has an alternative method of dealing with the danger posed by the Spirits: making them fall in love with him.

This season was well received by the fans, as it has ‘smart-comedy’ and was fun to watch.

Watch Date a Live on Crunchyroll

Continuing from season one, Shidou goes about his school life while encountering new spirits. He works with Ratatoskr to seal their powers, just as you’d expect.

However, this season presents a new threat to Shido and Ratatoskr – DEM Industries, a large corporation run by a man who has a keen interest in spirits.

DEM Industries supplies much of the equipment and weaponry used in anti-spirit warfare, including the AST supplies.

Partway through the season, the challenge shifts from sealing spirits themselves to fighting DEM Industries. The season is filled with questions.

Shidou Itsuka carries on with his quest for Ratatoskr in finding Spirits and trying to seal their powers while maintaining his relationships with the ones he had already sealed.

Moreover, as new Spirits appear, he must undergo more complicated trials to put a stop to further disasters as he discovers more about the Spirits’ origin.

The first arc picked up in this season involves Natsumi, who is the seventh spirit. The second half takes a more serious tone and introduces an old character named Origami.

The following are the cast and staff members for the Dead or Bullet movie:

9. About Date a Live

Ordinary high school student, Shidou, discovers a mysterious girl at ground zero of a recent space quake. Shidou learns through his sister, Kotori, that the girl is one of the Spirits.

Spirits are mystical creatures responsible for the space quakes. Shidou is recruited to help ‘seal’ the spirits and end their threat to humanity.

There’s one catch – the only way to seal a spirit is to make her fall in love with you. 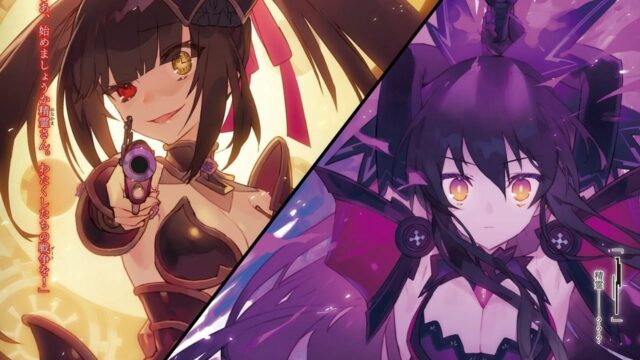 Do your best! Magical Girl Kurumi Season 3 to debut October 7