Once again, World Trigger is back with its brutal cliffhangers; episode 10 is the living proof of how wonderfully Toei Animation loves to tease its audience. The hype created for Tamakoma-2 was internally satisfying; other teams are finally seeing their potential.

It is the moment for Tamkoma-2 to shine. Hyuse is here, and everyone is desperate to see him in action as an ally; indeed, it will be mind-blowing. After Karasawa’s casual threat of disposing of Hyuse if he decides to betray, Karasawa strikes up an exciting topic of ‘Whether Tamakoma-2 will be selected for away squads.’

Despite the built-up suspense in episode 10 of season two, the recent chapter of the manga reveals that all the members of Tamakoma-2 have participated in the Expedition selection exam.

Contents
1. Expedition Selection Program
2. Tamakoma-2 Will Be an Asset for the Mission
3. Will the Border Send Osamu and Tamakoma-2 on Away Missions?
4. About World Trigger

After the rank wars are over, from chapter 200, the new arc has officially begun. Like the B-rank wars, the Border will be conducting tests to select the expedition force.

It is given for A-rankers to have a free pass to join the away missions, so during the tests, the A-rankers will be the judge for this competition. However, some A rankers will be a part of this test, like Ai Kitora, Shiro Kikuchihara, Shohei Kodera, etc.

The participants will be divided into 11 squads with their respective leaders. These leaders will select their members on a lucky draw system; it’s a first-come, first-pick thing.

The Border has set a rule not to include two members of the same team in one squad, so sadly, Tamakoma-2 will be separated. They will have to fight against each other as Osamu is a part of Suwa’s squad, Yuma in Utagawa, Chika in Ninomiya, and finally Hyuse in Wakamura’s

It will be exciting when they will have a face-off. Tamakoma-2 functions as a whole by enhancing and supporting each other. Border has also forbidden the squads to plan before the test- talk about raising the difficulty levels; that would mean they will have to come up with plans on the spot. I wonder how Osamu will bring in his battle strategies.

2. Tamakoma-2 Will Be an Asset for the Mission

Time and time again, Tamakoma-2 has proven they have great potential to surpass others. As a team, they are overpowered, but they have specific unique strengths that are irrepressible as individuals.

Believe it or not, Osamu, our underdog, has grown phenomenally, and he has the brilliance to grow even more. Earlier Osamu would be eliminated by others because he was weak, but it’s evident after episode 10, Osamu has become a threat to them now.

On the other hand, Yuma is exceptionally talented and has shaped his talent through sheer hard work and training. He also has a black trigger that could work like the endgame joker and change the whole game. Chika is our walking talking trion resource hub. She will be very useful for the away mission.

Hyuse and Yuma are both neighbors, so they know their way around in the Neighbourhood. Since the mission will be conducted in Hyuse’s motherland, it is their major advantage; moreover, let’s not forget how overpowered Hyuse is. Tamakoma-2 provides more advantage to the force, and there are high chances that they can pass the test.

3. Will the Border Send Osamu and Tamakoma-2 on Away Missions?

As mentioned earlier, Tamakoma-2 members are capable of fighting and are a talented bunch. Some have battle experience, while other novices like Osamu and Chika fill the gap with distinct qualities. Now it all depends on the results of the test. However, Jin has hinted towards Osuma joining the away mission.

The Tamakoma branch has made a deal with Galopoula invaders to share information. They will now act as middlemen to inform the Border about Aftokrator secrets, and for that purpose, they give Jin a transmitter trigger, and he immediately gives it to Osamu.

Jin also introduces Osamu and Yuma as his representatives since he predicts with his side effect that he will be staying in Miden for defense while they will be on the away mission. So we can assume that Osamu and Yuma are sure to join the Expedition force. As far as Hyuse and Chika are concerned, they will have to prove themselves in the selection program.

As the audience, all we can do is hope that our favorite Tamakoma-2 will join the force. Only Asihara knows the truth, so let’s cross our fingers, guys! 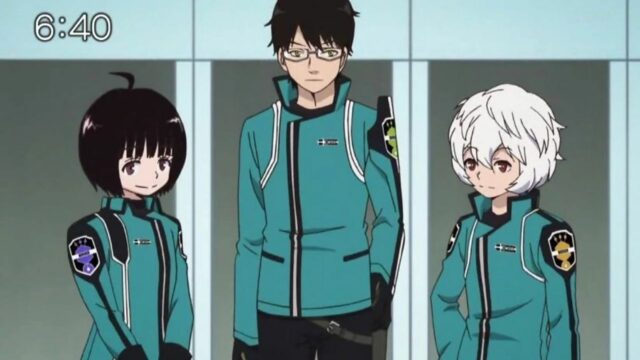