The mention of the name ‘Gabi’ in the Attack on Titan community is bound to elicit a buzz. Despite the presence of an environment where beloved characters perform immoral actions, Gabi’s sin of killing Sasha has been a major blot on her character. The moral greyness of most of these characters who have executed disturbing activities is received more amicably than hers. However, Gabi’s inherent personality seem to irk many in an almost amusing fashion. Gabi, on the other hand, is transforming and transcending the hate she held.

Her recent contribution to the alliance in defeating Eren has provoked questions of her role and significance in the story. But also, unsurprisingly, further hate as well. What is Gabi’s future? Will she die or inherit a titan – possibly, Eren’s? Let’s sift through some speculations and theorize, shall we?

Contents
Short Answer
1. What is Gabi’s role? Is she destined to die?
1.1 The symbolism for future peace
1.2 Gabi’s growth
2. Will Gabi inherit a titan after all? Will it be Eren’s?
2.1 Gabi and Eren – parallels
2.2 Where is Gabi headed?
2.3 The Jaw Titan Conundrum
3. About Attack on Titan

As of Chapter 137, Gabi is still alive and there has been no indication of her inheriting the Attack Titan. She merely aids in putting an end to the Rumbling and has escaped from the scene with the Alliance members. Currently, there seems to be no danger to her life or any ambitious intention for her role.

1. What is Gabi’s role? Is she destined to die?

Is Gabi destined to die? Isayama is an unpredictable mangaka but the answer to this is short and sweet: no, she will not. In retrospect, not a sweet note for all those Gabi haters out there. Gabi’s fate would have been sealed if Isayama had followed his original plan of devastating his loyal fans – ultimately, by killing everyone. But it’s clear that he has deviated from that approach, possibly, thanks to his editor – an emotional tether between the fans and this relentless mangaka.

I say Gabi isn’t going to die with conviction because Gabi does serve a role in the story which would be marred if she died. Isayama’s decision to focus on kids like Falco, Gabi, Louise and Kaya is an extremely crucial one to the message of Attack on Titan’s story. Much of its concern lies within the cyclical nature of hatred and the tendency of the coming generations to move on with their lives carrying the legacy of that excess hatred towards each other.

1.1 The symbolism for future peace

Falco, Gabi, Louise and Kaya inhabit significant roles which facilitates the readers’ understanding of how Eren’s actions will reflect on the next generation. This new world, that Eren wishes to bring, is occupied and belongs to the next generation.

Their choice of imparting hate or not is quite important then. For it reveals whether Eren’s plan was successful or not. Louise’s preoccupation with Eldia’s restoration stems from her reverence of Mikasa whereas Gabi’s hatred comes from within.

As a witness to Eren’s atrocities and with years of being indoctrinated by Marley, Gabi had served as a major plane for this conflict to play put – will the hatred continue or is there room for growth? Gabi’s growth has been witnessed ever since she saves Kaya and prioritizes Falco’s safety – it seems to be that Gabi’s rage has softened over the course of events.

Can anyone blame her though? This kid has been through a lot. Personally, I was amazed that she held onto her biases for this long when all hell was breaking loose on their world.

The understanding that everyone grows at their own pace is exemplified by Gabi’s growth. She finally removes the black and white lenses that held back her perception of reality – one that was filled with many colours, especially grey. With her rage being tempered, she is able to reconfigure her priorities – to save her loved ones and largely, to save the world. This allowed Gabi to set aside the obstacles that prevented her from siding with the Alliance.

Gabi’s role is crucial in two ways – she’s a great strategist for the team and holds a symbolic significance for the story. If Isayama’s intention is to build a future for humanity, then Gabi definitely finds a place there as the representative of the future generation.

Her journey of setting aside her hatred is a rough path she takes to contribute to the peace that would eventually, be established. But if Gabi’s alive, does that mean she has a grander purpose – such as inheriting the Attack Titan? This is what some seem to speculate but I’ll gladly give my two cents on this.

2. Will Gabi inherit a titan after all? Will it be Eren’s?

Gabi is very unlikely to inherit a titan, even Eren’s. To reiterate my earlier point, the objective of Attack on Titan is to bury the cyclical succession of hatred. This legacy of hatred has birthed the practice of feeding Titans to children – forcing them to assume the responsibilities of the world. This is a practice that Eren has shown incredible distaste for as witnessed in his conversation with Historia.

Eren has been made privy to the deplorable conditions that these children face – as a child who had been thrusted with a responsibility by his father, one of which was to inherit the Attack and Founding Titan.

It would be antithetical to the purpose of the story if Gabi ends up eating Eren. Most importantly, there has been no inclination towards where the plot will take us in terms of the future of Titan powers.

Will they cease to exist, or will they be made dormant after this generation’s Titan shifters? Eren’s vague advice to Falco back when he was disguised as Eren Kruger indicates that he doesn’t have a complete idea of what the future holds. So, both the possibilities seem likely.

Interestingly, in Chapter 130, He ponders over how if Eldians are eradicated, titans would be gone from the world – but he quickly reaffirms that that is not a future he is okay with. Unless these are merely Eren’s assumptions that the only way to get rid of Titans is to eradicate Eldians, it is plausible that the titan powers wouldn’t cease to exist. The logic of this is something that only Isayama can provide.

Much of this speculation of Gabi eating Eren comes from these obvious parallels between the two characters. But what piques the curiosity of fans is the eerily similar mirror scene of Eren in Chapter 106 mimicked by Gabi in Chapter 124.

A determined Eren ties his hair and while looking in the mirror, states “Fight. Fight” whereas Gabi also ties her hair and states that she won’t give up. Fans believe that Eren has access to Gabi’s memories (likely from her inheriting his titan) and that he unconsciously reenacts her action in that scene because of it.

For this, I think I’d have to say that Isayama has a pattern of drawing parallels between characters and that this scene was nothing beyond that. Take, for example, the parallels of the bond shared by Uri and Kenny and Erwin and Levi. There even exist parallels between Eren and Reiner. Naturally, it exists between Eren and Gabi who have been two hot headed kids, traumatized too soon, driven by revenge and softened by the reality of the world.

However, they have different paths to lead in the story. Gabi as the “hero” objectively and Eren as the “villain” in the same sense. The similarity between the two characters and their actions is an ode to the sameness that exists in the Island and beyond it. As Eren once states to Reiner, “Within the walls…outside the walls… we’re all the same”. The scene seems to exemplify that thought. The theory is quite tempting however the events of Chapter 137 seem to indicate that there are no plans as such for Gabi to eat Eren.

Most importantly, Gabi is accompanied by many adults from the 104th Cadet Corps – it would be out of character for them to allow a child, like Gabi, to inherit a titan. It would go against everything they’ve been fighting to establish. Additionally, there’s very less left of the story to open this can of worms.

Now, another major reason why I believe that Gabi is unlikely to inherit the titan is because Isayama was already confronted with an opportunity to let her inherit one, but he made a conscious decision not to do so. Falco, a very unlikely candidate, ends up becoming the Jaw Titan. I understand that much like Gabi, Falco also forms part of the “new generation”.

Falco’s inheritance of the Jaw Titan (with features of the Beast) plays a great role in bringing down Eren. Moreover, the consumption of the spinal fluid on part of Falco was a tragic accident. To suggest Gabi would inherit Eren’s titan would mean that she would consciously inject titan spinal fluid in her or God forbid, someone else would. Chapter 137 beautifully illustrates the role Gabi plays as the key strategist along with Armin to defeat Eren. Nothing much is asked of her beyond her clever mind and her ability to adapt.

Let us know what you feel in the comments. Do you think Isayama is going to pull a 360°and kill Gabi, or worse, make her the new inheritor of the Attack Titan?

The manga began serialization on September 9th, 2009 and continues to date with 30 tankōbom formats. 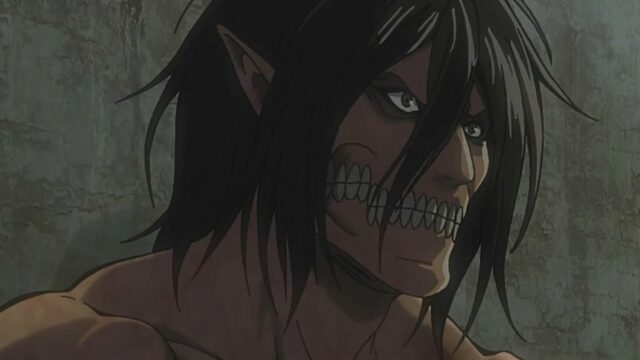