Stain’s re-appearance couldn’t have been timed more perfectly! Anywhere he goes, he views how real and counterfeit heroes are failing to mitigate the extensive damage that the Paranormal Liberation Front (PLF) unleashed into the world!

But let’s face it. What really makes this warped dude ecstatic is the fact that hero society is in shambles. First off, the aftermath of the war filtered heroes through a sieve to Stain’s ultimate satisfaction. Second, true heroes are retiring! It’s shocking, but at the same time, within expectations.

Now that Stain’s relevant in the series again, let’s unravel his current motivations while he lurks in the shadows of MHA’s shattered communities!

Tags
SPOILERS AHEAD! This page contains spoilers from My Hero Academia.
Contents
1. Why is Stain back in MHA?
2. Are Stain’s ideologies bearing fruit?
3. Does Stain revel in-hero society falling apart?
4. Will Stain kill All Might?
5. How does Stain perceive All Might, the former No. 1 hero?
6. How can Stain hinder Deku in pursuing All for One and Shigaraki?
7. About My Hero Academia

Stain can enable Deku, a true hero, in progressing with his goals. He can stop the rampaging Tartarus escapees so the young hero can focus on chasing All for One and hunting Tomura Shigaraki!

As we all know, Stain is infamously known as “The Hero Killer”. He kills fake heroes because he hates the fact that they’re only doing their quota for the day to save a few people.

Deku is overworked because he is saving countless of civilians left and right. He’s going beyond “Plus Ultra”; he is exceeding Stain’s expectations, and; he is molding or improving Stain’s textbook definition of a “true hero”.

Seeing the young lad like this may influence Stain to become Deku’s ally in the shadows. He will allow Izuku to reach his goals because the All Might fanboy is in the process of becoming a “real hero”, but Stain will enable the boy to do so secretly.

He won’t want the 9th One for All user to pursue his goals if it means being a tad influenced by a spectator like Stain. The “Blood Curdle” Quirk user wants to witness the actions and decisions a true hero-in-training like Deku would take in dire circumstances, but with little to no influence from external factors such as him.

Many so-called heroes or wannabe heroes are not doing their due diligence to save citizens. Therefore, in Stain’s eyes, those kinds of people are just a sham! They are just doing the bare minimum despite being handsomely compensated with benefits and all.

The random hero whom Ochaco Uraraka overheard saying, “This is all too much. I need to find a new line of work.” is an example of a fake hero (see Chapter 296). Had Stain heard that dude’s comments, he would rejoice because his initial plans to eliminate many counterfeit heroes are now manifesting.

Without even lifting a finger, Stain’s ideologies are bearing fruit because All for One, Tomura Shigaraki, and many Tartarus escapees (like Muscular, Lady Nagant, and Dictator) are doing the dirty jobs for him! These villains act as deterrents so counterfeit heroes would slowly disappear and be discouraged to resume work duties in an already-shambled hero society.

Stain is definitely reveling in hero society falling and breaking apart! So, it’s not a surprise to him that both fake and true heroes are hanging up their capes and looking for other jobs.

Fans have seen this a few times since the end of the War Arc; therefore, we’re presuming Stain heard or witnessed heroes quitting their jobs while returning to his home.

With the war’s aftermath, heroes all around Japan are being put to the test. Those who are a tad braver are hanging in their heroic duties as they remove building debris and ruins to save lives.

But some weak-willed heroes say that the devastating catastrophe is too much for them; they’ll be quitting their hero duties to find regular jobs to survive.

Sure enough, many fake heroes followed suit and resigned from hero work. Heck, even Death Arms (who is dubbed by Endeavor as a “true hero” or a “good hero” because he uncovered PLF’s Slidin’ Go’s spying duties) is calling it quits because the scream of one boo far outweighs ten cheers upon saving people.

Stain may not kill All Might if he learns that the former No. 1 hero is breeding the next “true hero” (Deku). A “true hero” to Stain is someone who pursues their heroic convictions and still stands up their grounds despite their limp noodle appearances (All Might, for example).

Seeing All Might frail and weak may be off-putting for Stain initially. But since he has been stalking All Might and Deku, he may have concluded that both retain the qualities he deems fit a “true hero” would embody.

On the other hand, if Stain being off-put by All Might’s weak-willed personality carries more weight (since he just overheard how Deku is leaving All Might for good), Stain might snuff out All Might right then and there.

This holds true even if All Might pleads Stain for his life (saying that he still has so much to say to Deku). If Stain slays All Might, he will have had the audacity to finally kill the former No. 1 hero after admiring him for so long.

5. How does Stain perceive All Might, the former No. 1 hero?

Stain sets All Might apart from the so-called heroes of the MHA verse. That’s because he witnessed the Pro Hero go out of his way to save numerous citizens many times in a day during his glory days. For an anti-hero/anti-villain like Stain, All Might is as much the shining pillar as he is to the average Joe.

The Tartarus escapee may still perceive the gaunt All Might as a true hero even after eavesdropping on the former No. 1’s heart-breaking conversation with the 9th One for All user.

That’s because he implicitly learned of the strong father-and-son bond between them. From this, Stain may even presume how All Might is raising and training the next Symbol of Peace (Deku)!

And remember that Stain eliminates individuals who are “not real heroes” or “counterfeit heroes” in this saturated hero society. But then again, he’s a hypocrite because we also see him take out a “good hero” by incapacitating Tensei Ida (older brother to Tenya Ida) while on hero duty in Hosu city!

Therefore, he may have returned in the series so he can slowly continue to eliminate the remaining phonies and “good heroes” one by one (so only real heroes like Deku and All Might can thrive in society)!

With Stain unloosed and armed with a treasured samurai sword (which he retrieved from a secret location in his shambled wooden apartment), who knows how he’ll use it. But perhaps, just perhaps, he may use it to protect the former No. 1 hero!

6. How can Stain hinder Deku in pursuing All for One and Shigaraki?

On the other hand, Stain can be a hindrance to Deku in the Villain Hunt Arc. He can race with Deku in hunting All for One and Tomura Shigaraki down; then, make negotiations with the League of Villains to ensure catastrophes and disasters do not subside.

Not only will Stain’s plans continue to discourage fake heroes from reappearing; this brilliant plan of his in allying himself with the League of Villains will push (if not force) real heroes (including ones overseas) to come to Japan and unleash their full power against Deku’s arch-nemesis!

Stain’s goal is to preserve and enhance real heroes (who by now are the “dregs” of a sham-filled and saturated hero society). But, at the same time, it will lead Stain to a path where he’ll continue to defy weak-willed villains because they lack basic convictions (in the same way that he defied Tomura Shigaraki initially).

There are so many uncertainties with Stain because he’s positioned in the middle ground. He can allow Deku to continue his solo journey as a deterrent for counterfeit heroes to reappear, but he can also influence the League of Villains to maintain a shambled society with minimal to no fake heroes.

7. About My Hero Academia

It has been serialized in Weekly Shōnen Jump since July 2014, with its chapters additionally collected in 31 tankōbon volumes as of June 2021. 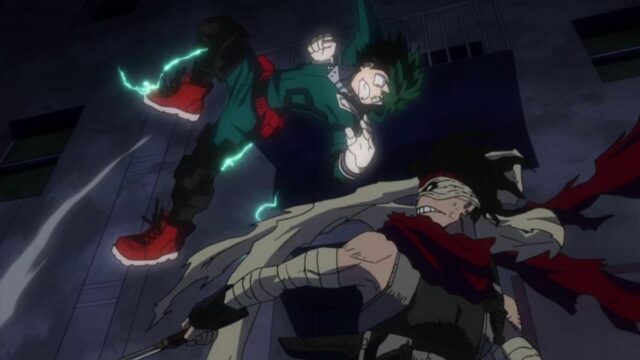