What would you do if you’re alone in the jungle? No food. No water. No shelter to keep you safe from dangerous animals. Just you and a bunch of stone statues to keep you company. Well, today, allow me to explain the same scenario happening to one of Dr. Stone’s beloved characters — Suika!!!

It’s just plain sad to live in the stone world! Look how the sweet and adorable Suika struggles along. As the reliable Great Detective Suika, we know she’ll never give up. But who’d have expected she’s out to save the day?!

Yes! You heard me right! This fragile little girl whom readers thought was just a mere side character is the lone survivor and savior of the petrified Kingdom of Science (aka Junior Science Brigade)! Fending for herself while trying to find out a cure for her friends? Now, that’s a tall order coming from a child of the Stone World!

How did she ever manage to get here, you ask? Well, fear not! Let us help you understand what makes her extra special as she goes through this lonesome quest!

The author chose Suika to be the savior and survivor to showcase that a brilliant mind doesn’t just come from a natural-born genius like Senku! Suika has been around the series since Season 1. And with the spotlight shining down brightly on a kid like her, the author is implying that children can achieve greatness through sheer determination and willpower (not just through their DNAs or birthrights)!

I mean, sure, Suika is by far the last person on the reader’s mind to save the Science Brigade from Stanley and his men’s raid. She’s only 12 years old as of the current timeline of the manga series (as of Chapter 195). But for a kid like her, it sure takes a lot of guts and luck to survive the wilderness!

Finding food, shelter, and clothes was already challenging for a 15-year-old boy like Senkū when he first started. But for the Dr. Stone storyteller to do this on a kid, let alone a girl, is quite telling that greatness doesn’t exclude side female characters like Suika!

In essence, greatness can come from even the children of the Dr. Stone series! I think this is partially what Riichiro Inagaki (the author of the Dr. Stone manga) is telling his readers when he allowed Suika to take up the mantle from Senkū, Chrome, Kohaku — all capable people with unique talents of their own in the story.

I’ve enumerated below 5 talents Suika possesses that would enable her to survive in the wilderness and carry out Senkū’s orders to create a revival fluid:

Perseverance is an obvious trait of any Science Brigade member. But this trait shines especially on Suika because she has to start from literally nothing! She said this herself in Chapter 195, “Starting with nothing, Suika’s gonna do some science.”

Who knows how many weeks, months, or years that will take if Suika doesn’t have the proper skills to craft glass, brew chemicals, and follow scientific instructions?! Forget understanding the chemical ratio of nitric acid against bat guano (or bat poop). She doesn’t even know where to extract said solution in the first place!

But Senkū, Ryūsui, Gen, and the other members of the Brigade cannot lend any helping hand at all to Suika because they’re stone statues. Therefore, she must hunt food on her own using Chelsea’s map and create the revival fluid using the instructions Senkū wrote on a piece of torn paper.

All these activities require physical energy and mental stamina. And if that’s not enough, Suika is alone! The only living beings she can speak to are monkeys and the other animals of the South American jungle!

So, not only is she prone to physical exhaustion, but she needs to keep her mind sane while figuring out the chemical ingredients of the revival fluid! Hence, her journey from here on out as the savior and survivor of the Junior Science Brigade requires a lot of perseverance!

Remember how she debuted in the series? This 9-year-old girl meekly walked to Senkū, Chrome, and Kohaku to become the helping hand to the main cast. Her whole character revolves solely around being the supporting cast for 20+ volumes.

But even if she’s only a supporting character who watches from the sidelines, Kaseki, Chrome, Kohaku, and Senkū wouldn’t have progressed with their scientific experiments and science crafts without her help!

Suika has been limited to the supporting role since the beginning of the series. That’s why people see her as nothing more than just a cute side character unlike the rest of the gang.

That’s why Inagaki-sensei is upgrading Suika’s role from a helping hand to sole survivor! Sure, she’s not the main character, but golly, Suika has never shone brighter before!

It’s quite telling that Inagaki-sensei wants Suika to shine because she’s almost like an empty shell even if she’s a supporting character. She is not an inventor like Chrome nor a skilled aviator/navigator like Ryūsui. Nor does she have François’ proficient butler skills that are useful in every Junior Science Bridgade’s expeditions.

Suika is a simple character to understand. Readers love her so much because they connect with her innocent mind. Unlike Senkū and the others, Suika doesn’t tie herself down in chasing burdensome pursuits. To name a few:

Taiju and Ginrō are also simple characters to understand. Like Suika, the minds of these two boys are almost free of any sort of burdens. However, Taiju’s heart is somewhat heavy because he has witnessed Tsukasa’s culling (or breaking of the stone statues) with Senkū since the beginning of the series. While Ginrō — even though he primarily shines for comedic moments — the author managed to portray his sad emotions in a few serious scenes.

Suika is an empty shell that needs to be filled up in terms of character role, development, and growth. More ideas are brewing on Inagaki-sensei’s mind when it comes to Dr. Stone characters. But he can do so much more with Suika because she’s been a simple character who’s been sidelined time and time again for about 4 arcs into the story now.

Suika is a resourceful gal because she hunts fish, gathers fruits, builds a hut, and keeps herself safe from wild beasts — all taxing activities to keep oneself alive! And throughout all her adventures, Inagaki-sensei is showcasing it beautifully.

Suika may be empty-handed but she’s not a naïve girl. Therefore, she must ready herself so her head can be filled with the scientific knowledge and survival instincts passed by Senkū and his friends onto torn paper.

To keep herself warm, Suika learned to start a campfire on her own! Then, she started fishing; then, climbed trees to gather fruits. Down the road, she might even fertilize the ground so she can start planting vegetables to feed herself!

Sure, she’s a crybaby most of the time. But hey, what can you expect from an emotional 12-year-old girl like her? She may get hungry oftentimes than not and may get tired easily. But she always picks up her pace when she utilizes the materials Senkū and his friends left for her. Suika’s the perfect example of a resourceful gal!

Being open-minded is a necessity to survive in the South American jungle! Suika cannot really pick the best meal plan for her dinner since she can only smoke fish with her campfire. Whatever food she can get her hands on (be it smoked fish, coconuts, or papayas), she has to be satisfied with them if she wants to fill her belly!

In other words, Suika doesn’t really have much of a choice. If she wants to continue her journey to be the sole savior and survivor of Ishigami Village’s scientists and explorers, she must press forward and make-do whatever materials she can grab to create the revival fluid!

Improvisation is key in her long journey ahead. If she can’t find bat guano to formulate a solution, she has to be open-minded for alternatives to make the nitric acid — the miracle fluid substance to de-petrify stone statues! 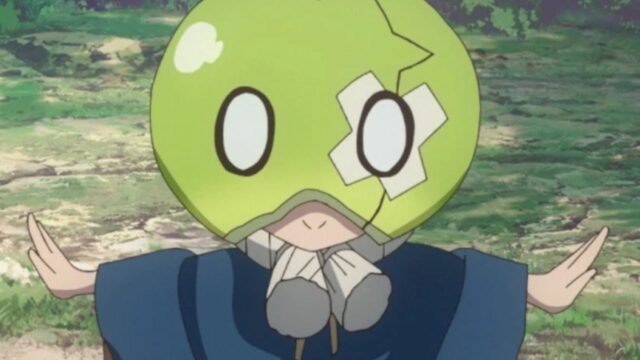