Asta is lost! But now that he has dropped in the Land of the Sun, what will he learn? And would you look at that: Yuki Tabata surprised us all! Who knew he would choose this magnificent place as the battleground for Asta’s final fight?

Let’s face it: the Land of the (Rising) Sun is obviously based on Japan. Yuki chose his very own homeland to let Black Clover swords shine some more in its last arc.

We never would have thought Black Clover is gonna have its own “Wano Arc” (LOL!). Yet, here we are, and we’re all ready for an epic showdown!

After taking a seriously good look at that glorious two-paged spread at the end of Chapter 337, I gained some ideas of what Asta will do here. Want to hear it? Then, read on my friends!

Tags
SPOILERS AHEAD! This page contains spoilers from Black Clover.
Contents
What will Asta learn in the Land of the Sun?
About Black Clover

What will Asta learn in the Land of the Sun?

First of all, let’s establish the idea that Asta’s powerups don’t come randomly from strength boosts; rather, he powers up by learning more techniques. And since the Land of the Sun (or “Hino Country”) is loosely based on real-life Japan (the “Land of the Rising Sun”), Asta may learn different Japanese techniques.

For example, this land could be the perfect place for Asta to get his last Anti- Magic Sword so that he could learn “Sephiroth Katana” (despite Asta already obtaining his very own katana).

As a fan, I’m also curious to see whether Hino Country uses a different power system. After all, Chapter 337 opens readers to a Feudal Japan era of Black Clover instead of the series’ Imperialist Western setting.

Therefore, the Land of the Sun’s fighting system might revolve around “spell imprints” or “rune imprints” onto fighters or magicians’ weapons. Even if these techniques are very cool, they are not too different on “grimoire imprints” pre-chapter 337.

I also want to pinpoint something on Ryuya Ryudo’s eye patch since the design looks very interesting. If you look closer, this eye patch may originally have been Yami’s hand guard from a katana!

Cool, right? But that’s just a wild guess, though. We won’t get any clarification on Ryuya’s eye patch until maybe, later in the series.

Still, Asta did say that Ryuya and Yami’s ki are “similar”. This is a very interesting concept if you ask me since the two are childhood friends. Hence, we might soon see Asta wielding his very own “3-sword style” weapon. What a treat! 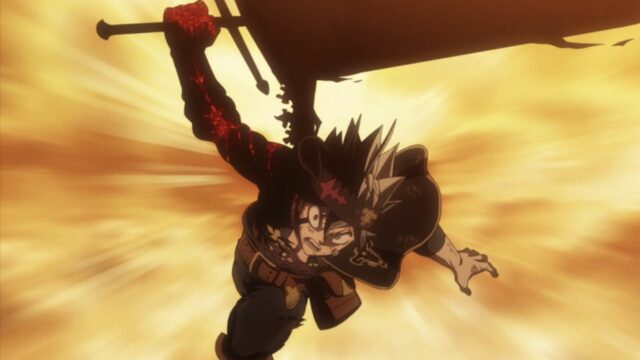 Black Clover Chapter 337: Where is Asta? What’s his next power-up?