Fruits Basket: The Final has been an emotional roller coaster ride for this spring release! And with 2 episodes left to go, it feels like my heart is going to break like a chocolate Twix bar!

For those who were kept in the dark about this season’s twists and turns, good for you to freshly experience this show’s dramatic climax!

However, you must also be wondering what the heck is up when Kyo saw a bloody Kyoko in his dream?

Today, allow me to explain the heartwarming friendship between them! These characters’ relationship has been intriguing to fans since their connection was revealed during the 2nd season.

But now, let’s dissect their facades and slowly unravel their mysterious histories!

Tags
SPOILERS AHEAD! This page contains spoilers from Fruits Basket.
Contents
1. Did Kyo kill Kyoko?
2. What is Kyo and Kyoko’s relationship?
3. Who killed Kyoko?
4. How did Kyo kill his mom?
5. About Fruits Basket

Kyo did not kill Kyoko. Although, first-time manga readers and anime-only fans were misdirected with this idea. Truth be told, it’s a very intriguing subplot to tell a dramatic shōjo narrative.

But because it’s a predictable plot twist, the Fruits Basket mangaka (Natsuki Takaya) avoided this route.

Despite this, Kyo was not left guilt-free for the remainder of the story! Back in the 1st season, Kyo visited the Honda grave with Tohru and her friends.

He was eerily quiet and distant. It’s obvious that Kyo was stressing out. But what’s eerier is that he’s plagued with trauma and guilt.

When Tohru’s psychic-like friend (Saki Hanajima) confronted Kyo, she read his waves and revealed to him that his heart and mind are chaotic! This revelation shuddered and scared Kyo to the core!

2. What is Kyo and Kyoko’s relationship?

Kyo and Kyoko shared a deep bond of friendship like a widow has with her cat. Their brief time together destined Kyo to Tohru because of his promise to Kyoko! It’s a melancholic and not-so-cliché boy-meets-girl love story making Fruits Basket a shōjo classic!

When he was a squirt, Kyo swore to Kyoko that he’ll protect her one and only daughter. But this vow was short-lived because Yuki met Tohru first! While Yuki proved himself to be more capable of protecting Tohru, she grew fond of Kyo.

Later, this crush of hers blossomed into love. But we all know how that played out when she confessed her true feelings to him!

Therefore, Tohru is the key to mending Kyo’s broken friendship with Kyoko. Without Tohru, he wouldn’t be able to bridge the gap he had with his old friend.

His guilt and regrets may not be erased, but Tohru’s existence alone provided Kyo atonement, forgiveness, and hope for a better version of himself!

It’s Kakeru’s girlfriend’s dad that killed Kyoko! Surprised? Well, you should be! It’s disappointing that this important detail will never be animated. But, not to worry! I’m here to explain the gist of this bittersweet story:

Kakeru’s girlfriend (Komaki Nakao) is relevant in Kyoko’s death! Her dad accidentally bumped the car into Kyoko while she was crossing the street.

Kyo attempted to save her but remembered his body’s abnormality: he’ll immediately transform into a cat when he hugged to save Kyoko!

It’s a tear-jerking moment for the cast because two parents tragically died that day: Tohru’s mom and Komaki’s dad!

You may think, “Who cares about Kakeru’s girlfriend’s dad? He’s not as important as the deceased Kyoko, who’s a supporting character to the series and mom to the show’s female protagonist.”

Well, Kakeru cares! Anime-only fans may not have seen Kakeru’s angry side; but when his girlfriend’s parent died, he was raging mad! He stormed to Tohru’s house and mocked her as “nauseating”!

I never thought that the happy-go-lucky Kakeru would be such a bad boy, but disgracing Tohru like that was unforgivable for us fans! While Komaki was shamed by her boyfriend’s behavior, it took about 3 years before Kakeru acknowledged his petty views on belittling Tohru.

Both Tohru and Kakeru talked it out when they realized one’s true identity when passing in the school hallway.

Although it was an awkward conversation, the two settled their differences in their own not-so-apologetic (Kakeru) and apologetic (Tohru) manners, then, peacefully parted ways.

Kyo killing his mom is another misdirection. His mom left a suicide note then jumped in front of a train! It was a tragic sight for the young Kyo to see!

He witnessed how his abusive father constantly scolded and berated his mother, “It was your fault for giving birth to a cat spirit-possessed son!”

If it wasn’t for her giving birth to a zodiac-possessed child, he does not have to deal with Kyo’s hideous true form. The family was looked down on, shamed, and shunned by other Soma households.

Essentially, the father drove the mom to the brink of madness. When her mind became insane and her spirit broke, she gave up her son; her dream of a happy family; and her will to live. That’s how Kyo’s mom died.

All the guilt, blame, and shame was pushed to Kyo by his no-good, drunkard, biological father. When it was too much, the cat-possessed child screamed that he would kill his old man, then kill the rat-possessed Yuki, and finally commit suicide to “satisfy” his dad.

No one wants to be abandoned, but we see how Kyo’s abandonment leads him to form solid friendships with Kyoko! When it was Tohru’s turn to be abandoned (when her mother died), she found herself associating with the Soma family again!

Fruits Basket is a phenomenal shōjo masterpiece! The final season is only 13 episodes, but it is adapting the manga’s conclusion faithfully!

The nearly 2 decades of waiting for a proper anime adaptation was worth it! Fruits Basket 2019 reboot is a gift to a broken world like ours!

Let’s cherish the last 2 heart-wrenching episodes of the series and watch how the guilt-ridden Kyo can mend his relationship with the deceased Kyoko!

It shows the various relationships and hardships of the characters along with their love and hopes, an amazing slice of life series! Fruits Basket: The Final is the last season of the series. 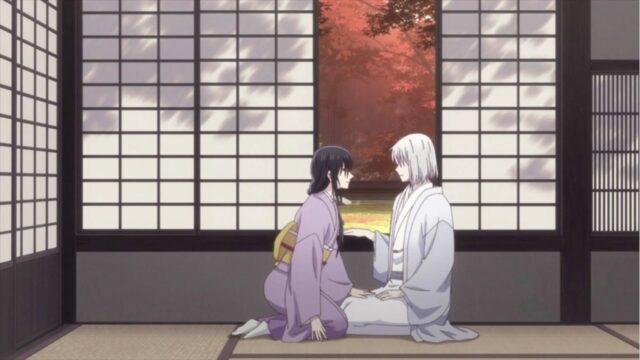