I was surfing the internet the other day and came across a Reddit post discussing how fun a spin-off based on Class B would be. Class B really has some underrated students, and it’s a shame we haven’t seen much of them until Season 5.

Besides their fun personalities and amusing antics, Class B also has some fascinating quirks.

From telekinetic quirks like Monoma’s Copy to physical mutations like Tetsutetsu’s Steel, Class B’s quirks are just as unique and powerful as Class A’s. That being said, let’s take a look at some of Class B’ strongest quirk users:

Setsuna is one of the students who got in through recommendations. Her quirk, ‘Lizard Tail Splitter,’ is one of a kind and excellent for surveillance, stealth, and supporting communication.

However, there isn’t much she can do with her quirk offensively. Bakugo’s team took her down easily during Match 5 of the joint training by taking advantage of her regeneration time.

Although we frequently see Kendo reigning in Monoma’s antics with a knock to the head, we don’t really get to see much of her abilities. Kendo was the mastermind behind her team’s two-tiered strategy during Match 2 of the joint training. Her quirk ‘Big Fist’ was strong enough to dent one of Yaoyorozu’s tungsten shields.

Ibara caught my eye ever since she took out Kaminari during the Sports Festival.

Although Ibara’s quirk ‘Vines’ is not very strong offensively, it is one of the most well-rounded ones in Class B. She can use her quirk for offense, defense, and even support and surveillance. She even helped restrain the giant Gigantomachia during Chapter 279.

Ibara’s only weakness is that it is possible to defeat her by cutting her vines off till she is bald. Also, although her vines appear thorny, they never actually seem to hurt her opponents.

Togaru Kamakiri is one of the many Class B students who has been inconspicuous until the Joint Training Arc. Togaru’s quirk ‘Razor Sharp’ lets him produce blades from any part of his body. These blades are sharp enough to even cut through metal, as we see in Chapter 207. Anyone who gets too close to him is sure to be turned into minced meat!

Togaru’s quirk, like Kendo’s, is only capable of close-range attacks. Although he has the advantage in close quarters, he was still taken down by one of Bakugo’s explosions right in his face.

Monoma’s quirk is called ‘Copy,’ and it lets him copy the quirks of anyone he touches. The only exceptions are those quirks that stockpile power or energy over time, like Midoriya and Eri’s.

Monoma has undergone the most visible growth since the Sports Festival. He can now copy three quirks at a time and has increased the time limit to ten minutes as well. Maybe his desire to outshine Class A did, in fact, propel him?

Manga Fukidashi is one of the most underrated students of Class B. His quirk is so extraordinary that it’s a mystery we didn’t notice him sooner, really.

Manga’s quirk ‘Comic’ lets him create huge words out of thin air. These words are all onomatopoeia– they describe sounds like in manga and comics! Manga played a crucial role in his team’s victory during the joint training.

Not even Aoyama’s Navel Laser could put a dent in his onomatopoeias. Also, I think it’s pretty neat that his name matches his quirk so well!

Shoda is yet another underrated Class B student with a fascinating quirk. Shoda’s quirk ‘Twin Impact’ doubles the impact of his attacks and makes the second impact several times stronger than the first. His quirk holds vast potential and is a perfect supporting quirk in a team.

However, Shoda doesn’t seem very strong physically, but that could change with time. Shoda also seems a little weak defensively– he was taken out by a single blow from Mina Ashido during the joint training.

READ:  My Hero Academia Season 5 Is Here! Does Class 1A Beat 1B? Who Is Stronger?

How strong it is and how long he can use it depends on his iron intake. Tetsutetsu tied with Kirishima during the Sports Festival and went head to head with Todoroki during the joint training. His endurance and durability are the most impressive aspects of him.

That being said, I’m afraid Tetsutetsu often isn’t the sharpest– he tends to dive right into the fight without thinking much. All brawn but barely any brains– I’m sure he could do better. Perhaps Tetsutetsu could intern under Best Jeanist with Bakugo!

Shishida probably has one of the most intimidating quirks at first glance. Shishida’s quirk ‘Beast’ gives him not only the intimidating appearance of a beast but also heightened senses and physical strength. Shishida has also proven to be very agile. He can dodge attacks by switching into his human form, which makes him smaller and faster.

His strength stood most during the joint training when he overwhelmed Tsuyu’s team and the battle against Gigantomachia, where he worked on opening the giant’s mouth by pulling on massive cables.

Juzo Honenuki is the strongest student of Class B in My Hero Academia whose quirk “softening” allows him to soften anything he touches. Honenuki can use his quirk to trap enemies like Gigantomachia, counter attacks like even Todoroki’s ice, and increase his mobility by swimming through the softened material.

Honenuki has also been shown to have excellent reaction time, flexible thinking, and impressive tactical skills. He indeed lives up to the reputation of being one of the students who got in through recommendations.

READ:  Why Did Deku Leave U.A.? Is He a Villain Now?
Watch My Hero Academia on: 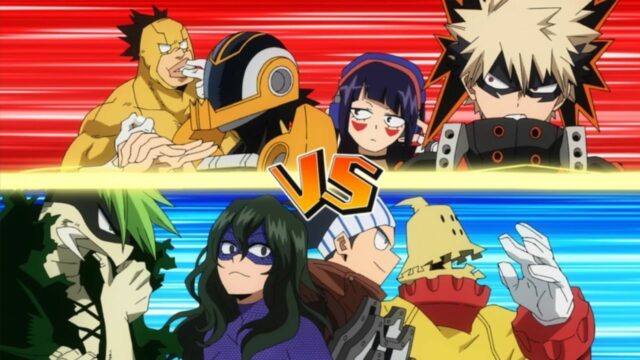 My Hero Academia Season 5 Is Here! Does Class 1A Beat 1B? Who Is Stronger?