Chapter 175 of the webtoon Solo Leveling shows Antares and Jin Woo fighting a heated battle, neither of them willing to accept defeat. Jin Woo tries to attack Antares with his Dragon Kaisel. Of course, it doesn’t leave a scratch on him.

Antares uses “Dragon Fear” and incapacitates Kaisel. Jin Woo uses “arise” and gets his dragons to attack him simultaneously to confuse him.

In that small window, he realizes he needs more power and builds himself a colossal armor with the power of darkness. Now that he’s much bigger than the king of dragons, will Jin Woo win?

The previous chapter gave an action-packed rollercoaster. The fight seemed to be going nowhere, but no,  Jin Woo has experienced a significant power-up. The shadows form his armor, and now he looks much bigger than Antares.

Does this mean he can take down the king of dragons without the rulers coming in? Fans still wish to see them make an appearance anyway.

Even if defeated, does Antares get to live? Seeing as Jin Woo is a just and merciful foe? None of us can say for sure right now.

176 of the Solo Leveling manhwa webtoon’s season has been available to stream for free since Wednesday, Dec 08, 2021.

Chapter 176 of the Solo Leveling Webtoon is on a break this week and will out on December 8, 2021.

He keeps attacking the king of dragons with Kaisel. He’s fighting a dragon with a dragon like it’s a medieval adventure. He realizes his attacks haven’t left a scratch on his opponent, so he tries to send Kaisel away to protect him.

Antares takes this opportunity to use “Dragon Fear” again to incapacitate them. Antares uses his dragon fire to attack Jin Woo but admits that if Jin Woo is as powerful as he thinks, this won’t hurt him.

Jin Woo tries to climb Antares to land a hit, but it’s as hot as magma. As Antares tries to catch him with his talons, he uses “arise” to get more dragons on his side.

One of his dragons bites Antares’ neck while the other breathes fire on him. This keeps him occupied for a while, and Jin Woo realizes he needs more power than he has to beat Antares.

The power of darkness seems to go towards him, and he makes himself an insanely big armor. Antares is shocked to see Jin Woo control the power of death so well.

Antares now understands how Ashborn could pass such powers to a human because he’s been fighting against himself even before receiving any powers.

He realizes how dangerous Jin Woo is and decides to kill him because he’s too powerful. In the end, Antares faces a scary-looking Jin Woo who has completely changed his form. 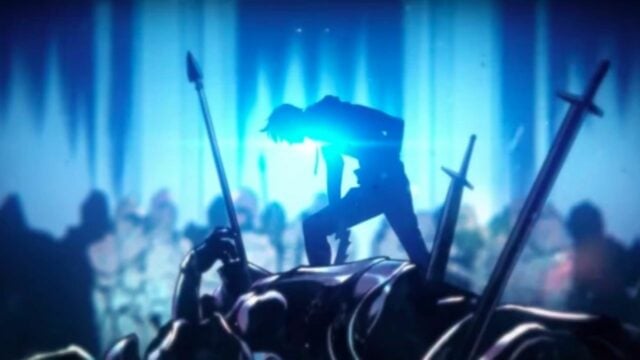