My Hero Academia’s protagonist, Izuku Midoriya, is many things in the series: he’s intelligent, brave, and tender-hearted. He sees the strengths of people even if all they can see are their weaknesses.

He is compassionate towards the oppressed and even wants to save his enemies! But, best of all, he’s hopeful because he gears his sights towards a brighter tomorrow no matter how dire the situation is today.

But if you tell me to compare Deku’s similarities to Chizome Akaguro (a.k.a. Stain), you will catch me off guard! It’s a bewildering statement in fact!

However, Horikoshi-sensei positioned Deku’s character development in Chapter 317 magnificently! Die-hard fans like us could never have been more surprised!

Today, allow me to present Deku’s current state in Chapter 317 paralleled to that of Stain, the infamous Hero Killer in the world of My Hero Academia!

1. Deku and Stain are both misunderstood individuals

When you look at the bare bones of the fallen hero society right now, Deku is walking a path similar to Stain (who carries a lot of weight since his debut in the series). Both individuals are rejected and neglected by society.

Civilians don’t perceive Deku anymore either as a hero or a vigilante. Rather, he’s perceived as a villain because of the way he looks and the way he unintentionally intimidates people while saving them. That makes him a misunderstood individual just like Stain!

Deku tries to save people. But because he’s perceived as a faux villain, both civilians and heroes mistook his heroic acts.

If this goes on, some civilians might outright just run away or even refuse his help because of the rumors surrounding how he’s “a villain-look alike”!

Stain, is, of course, the last person on anyone’s mind to be labeled as a “hero” even though:

a) he’s the only one who managed to save Deku from a Winged Nomu back in Hosu city (which, by the way, was truly an unexpected twist!)

b) he exposes the truth about hero society’s corrupt and messed-up world views.

Stain is a critical character in the series. But who knew a gruesome person like him could save civilians, let alone heroes!

If Stain (a villain-like anti-hero) saves either civilians or heroes, then there’s definitely something off and twisted with this “hero society” in the MHA verse!

Stain saving either civilians or heroes is not something the general populace would accept, thus, making him a misunderstood character like Deku!

2. Deku and Stain are firm with their convictions

I. What is Stain’s Origin Story?

We all know how Stain dropped out of school because he failed to propagate his “fake hero” idealisms in U.A.’s campus and its community.

But then again, his backstory is only glossed over in the main series through a news report; thus, earning him the “villain” badge of honor.

However, this news report is not all there is. In fact, the prequel (My Hero Academia’s Illegals: Vigilantes) expanded Stain’s origin!

Stain originated with his alter ego called “Stendhal” while wearing and carrying bulky samurai gears and equipment (see Chapter 10 of the Vigilantes spin-off).

We even see him with a nose (which is obviously gone by the time the Hosu City Arc began in the main series)!

But the point is, he was already stabbing people as Stendhal, and it started when he hunted down a mafia! Despite the mafia committing some “petty crimes”, they don’t deserve to die and are not worth killing; but Stendhal annihilates them anyway!

Stendhal evolved to become the terrifying Stain today. Because he planted the seeds of his convictions on himself during his teen years (likely while still studying at U.A.), we now see him as a warped and misguided character!

II. How did Stain debut as “The Hero Killer”?

The gateways of anti-heroism for Stain while rampaging as Stendhal in the community is: “Heroes have convictions, so villains must have them, too!”.

Nevertheless, he purges fake heroes and villains lacking convictions with his analytical samurai-style combat and “words of wisdom”!

That’s why he lectured Tomura Shigaraki upon first meeting! Despite the Villain Alliance’s growing power, Stain perceives Shigaraki as a villain leader without a destination due to the latter lacking basic convictions; hence, the former’s refusal to cooperate with the League of Villains.

Stendhal’s warped ideology fuels his desires. But initially, he only becomes “Stendhal” when he wears the mask and samurai outfit. When he takes it off, he no longer kills faux heroes or villains.

Nevertheless, his Stendhal alter ego led him to an incident where he became nose-less and more warped. It’s an unfortunate event that occurred during his formative years while being enrolled in U.A. as a hero-in-training.

Yet, Stendhal’s passionate hatred towards fake heroes burned all the more, and so, finally made the decision to debut as “The Hero Killer: Stain”.

It’s because of his strong desire to eradicate pseudo heroes and pseudo villains that manga fans finally understood Stain; they then categorized him as “anti-hero” instead of simply “villain”.

III. How is Deku similar to Stain when it comes to their convictions?

Deku is the same: he’s stubborn and stands his ground no matter how troublesome the torrential tidal waves come his way. He won’t budge for his beliefs because that’s what his mom (Inko Midoriya) planted on his head during his formative years.

All Might and U.A. only enabled his beliefs. When Deku meddled with Shoto Todoroki’s family problems during the sports festival, that’s Deku becoming a hero by sticking with his convictions!

Instead of forcing his own ideals towards Shoto’s throat, the All Might fanboy wholeheartedly inspired his friend to give it his all in the tournament because his Half-Hot, Half-Cold Quirk is his and not Endeavor’s nor anyone else’s!

Shoto neither asked for inspiration nor help, but he accepted Deku’s helping hand anyway.

Endeavor’s youngest child finally demonstrated his fire Quirk in the U.A. stadium and it’s all because he absorbed Izuku Midoriya’s beliefs towards heroism. That’s Deku for you standing his ground even for a tournament rival!

For Deku, being a hero means saving people and putting smiles on their faces. That’s why he keeps saving people no matter how broken his body, mind, and soul are.

But looking at Deku in Chapter 317, fans would say he’s beyond broken! Fans might even say that he’s irredeemable. However, we know how Horikoshi-sensei’s writing style is, so let’s hope Deku will return to All Might and his friends at U.A. sooner.

3. Deku and Stain are covered in blood and wear tattered costumes

In the My Hero Academia universe, appearances are everything. Just look how All Might and Captain Celebrity (from the Vigilantes spin-off) are presented as shining pillars. Society accepts them because they are the dashing, top-ranked American Pro Heroes!

On the contrary, Deku is far from looking like a hero. Although he’s intentionally saving civilians and heroes, his tattered hero costume says otherwise! He even got rid of his favorite red shoes (the ones Kota imitated to wear since Deku saved him)!

In any case, Deku is out on the streets. He is cold, hungry (he’s only eating a banana to ease his starvation), and worst of all, he’s homeless! He just left All Might and has nowhere to go now save for the spot under the bridge to shelter from the stormy weather!

If Deku does end up sleeping under a bridge, it’s an ironic twist of fate because the 5-year-old Tenko Shimura (Tomura Shigaraki’s real name) sought shelter under a bridge immediately after decaying his family with his Quirk!

Stain is similar. His maroon scarf, bandana, and “kataginu” (samurai vest) are in shambles! He looks like a dirty old man who hasn’t had a bath for months! Naturally, civilians would want to avoid him as soon as they see his intimidating and foul appearance!

His looks alone go to show how long he’s out and about assassinating the people he despises in several cities!

Also, remember that Stain’s Quirk is “Bloodcurdle” to paralyze his victims on the spot! Therefore, it would make sense if his kataginu are also splattered with blood!

Deku’s hero costume, scars, and wounds are also covered in blood, mud, and filth. It has been raining in recent chapters, so he also looks dirty and smells foul.

If civilians see Deku the way he is now, it’s no wonder they’ll spread rumors how he is similar to a villain (or in this case, how he’s All for One’s underling)!

Truth be told, they might avoid his helping hand, and would rather run away as soon as they saw a masked guy whose tattered rabbit costume is filthy and frightening.

Deku’s now a kid who has literally and morally lost his way right now! Therefore, it would be interesting to see how his conversation with his friends (and possibly, with Stain) will go if they bump into one another!

If Deku meets Stain first, either the two might berate/mock each other for looking so alike, or they might concoct a plan to get out of this mess All for One has bestowed on society.

Regardless of how their meeting will go, fans are expecting very big twists and turn in the upcoming chapters since Stain has now returned to the plot!

My Hero Academia is a Japanese superhero manga series written and illustrated by Kōhei Horikoshi. It has been serialized in Weekly Shōnen Jump since July 2014, with its chapters additionally collected in 31 tankōbon volumes as of June 2021. 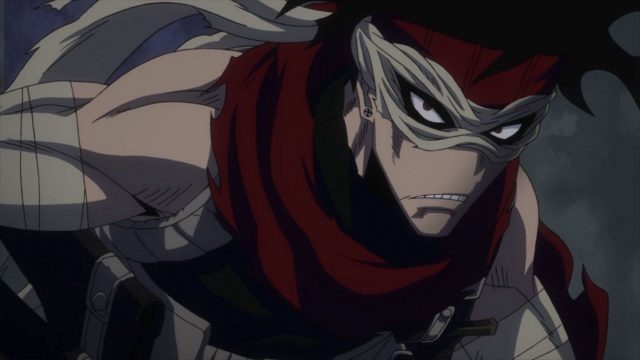