At the beginning of the series, we were introduced to demons that immediately killed Tanjiro’s family and turned his sister into one herself. With their strength vastly superior to humans and their rapid regenerative abilities, it seemed almost impossible to slay a demon.

That is until Tanjiro joined the Demon Slayer corps and was provided with his very own fancy demon-killing sword. With our protagonist all geared up, he’s now set on his way to exact revenge and find a cure for his sister!

But first, let us talk about his new sword. The thing that happened with Tanjiro is not only that his sister was demonified but he got a ‘death sword.’ (Talk about drawing short straws!)

It has been prophesized that Black sword users like Tanjiro die young, but it is uncommon for a scenario happening to the main character. (except that he did die for a while)

No more spoilers! Let’s get back to talking about the mysterious sword. Does it have a defining feature like the other blades? What symbolism is behind it? After all, our Tanjiro’s weapon can’t be quite ordinary now, can it?

What color is Tanjiro’s sword?

Due to its unique property, the blades are used by the Demon Slayer Corps to slay demons. After Tanjiro passed the Final Selection and joined the corps, Hotaru, a swordsmith, appeared at Urokodaki’s house to deliver Tanjiro his very own Nichirin Blade.

Both Tanjiro’s teacher Urokodaki and Hotaru expected the sword to take on the color red due to his burgundy tinted hair and eyes, and even declared the color to be a stroke of good luck.

However, after Tanjiro wielded the blade, it turned pitch black, which was ironically considered to bring bad fortune to its user.

It is said that the wielders of a Black Nichiren blade will not go far and will die young like their predecessors.

Why did Tanjiro’s sword turn black?

While the exact reason behind Tanjiro’s sword turning black is unknown, there are some theories and hypotheses placed together from bits and pieces of information available to us.

If we look at Zenitsu’s sword, it has a solid yellow band running down the length in accordance with his Thunder Breath style. Inosuke, on the other hand, practices the Beast’s Breath, and therefore, his sword takes on an indigo-grey color.

Taking all of these into account, we can conclude that the user’s breathing style has a significant impact on the sword’s color.

In that case, since Tanjiro uses the exceedingly rare Dance of the Fire God, i.e., the Sun Breathing style, which is the origin of all other styles, it makes sense for his sword to take on the color black.

It is believed that once a Nichirin sword takes on a color, it never changes again. However, Tanjiro’s sword did manage to get a temporary red color and I will discuss that in this article as well.

What do sword colors imply in Demon Slayer?

The Nichirin swords also go by another name, that is, “color-changing swords.” The reason behind this name is that these weapons take on a distinct color according to their owner’s traits when first used.

For example, Giyu Tomioka, the Pillar of Water of the Demon Slayer Corps, wields a blue colored blade. His use of the Water Breath style, accompanied by his fluid and calm personality, makes blue a perfect color for his sword.

In contrast to Giyu, Mitsuri Kanroji wields a pink Nichirin Blade that perfectly depicts her Breath of Love style and emotional and passionate personality.

Our main character, Tanjiro Kamado, wields a black Nichirin blade, and just like any other protagonist, his weapon is indeed special. As it turns out, black Nichirin swords are very rare, and because of that, the symbolism behind it is virtually unknown.

Keeping up with the tragic theme of the series, the only piece of information available about the black sword is an omen that dictates that the wielders of this blade always die young. Is this a foreshadowing towards Tanjiro’s death?

Manga readers definitely think so. Just like other users, Tanjiro indeed died young, even though it was only for a short while. Whether this was indeed a foreshadowing or just a pure coincidence, only the creator knows.

READ:  Did Tanjiro die in Demon Slayer? Will he die? [MAJOR SPOILERS]

Can Nichirin swords change its color more than once?

After wielding a Nichirin sword, it takes on the color that most reflects its user’s traits and remains that way forever. However, in the manga’s later chapters, we see some swords taking on a crimson color on top of their original.

In essence, Nichirin Swords cannot change their color more than once. They only change colors when are wielded by the owner for the first time. However, Demon Slayer swords do have a property of temporary change in color under specific circumstances.

The reason Nichirin swords change their color to crimson red is exposure to intense heat that raises its temperature. These swords can hamper the regeneration of demons and, in some cases, burn them on a cellular level.

However, there have been only a few characters whose swords have changed colors such as Tomioka, and Sanemi.

During the fight against Muzan, when Sanemi forcefully clashed his sword with Giyu’s, both of their blade colors changed temporarily to red.

It is assumed that the reason their swords turned red was that Giyu had his Demon Slayer Mark, which allowed him to raise his body’s temperature and, in turn, that of his sword.

If you are confused about this heading, you certainly have not read the manga and you most certainly don’t know your spoilers. 😉

During his battle against Muzan, when Tanjiro used his Sun Breathing style, his black Nichirin blade turned red and gave him the ability to hamper the enhanced regeneration of the Demon King.

Why did Tanjiro’s sword turn red is a difficult question altogether as it was never officially revealed in the manga. Although, I do have one prominent theory and an alternative for the phenomenon.

One of the reasons for the sword’s color change might be because swords turn red due to exposure to intense heat, which is a very common and scientifically proven phenomenon.

Another factor that might have affected Tanjiro’s sword changing color to red might be his Demon Slayer Mark. It is believed that these marks may enable the users to dye their blades red and give it the same properties of hindering the demon’s regeneration.

Demon Slayer: Kimetsu no Yaiba is a Japanese manga series written and illustrated by Koyoharu Gotoge. Its publication in Shueisha’s Weekly Shonen Jump began in February 2016.

In a world filled with demons and demon slayers, Kimetsu no Yaiba follows the lives of two siblings Tanjiro and Nezuko Kamado after – the murder of their family at the hands of a demon. Their hardship does not end there, as Nezuko’s life is spared only for her to live as a demon. 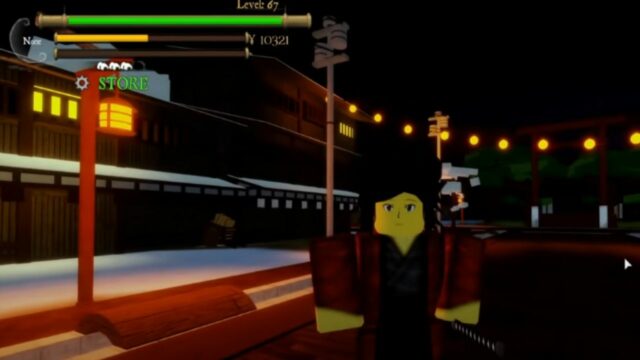 How do you get a Nichirin Katana in Demon Slayer RPG 2?