On May 13, it was announced that the Broadway rage Hamilton was going to arrive on Disney+, 15 months ahead of its scheduled theatrical release on July 3, 2020. A strange feat even by standards of the production giant Disney.

The brilliant Broadway experience is going to meet technology and be broadcast as a film around the world, with every viewer put in the central most important seat in the audience – now that’s something us geeks at EpicDope would be extremely interested in!

It is a sad thing that this democratic digitization had to come after a shock as rude as COVID-19, but what else can we do except count the blessings and keep looking for silver linings.

Explaining the concept during an appearance on Good Morning America, the musical’s writer Miranda had said: “[Kail has] basically given everyone at home the best seat in the house and it’s a thrilling experience.”

“He really threads the needle between these cinematic close-ups and widening out and seeing the show from the centre aisle of the Richard Rodgers Theatre.”

The movie will also be the only way to experience the Broadway show for a while — performances in New York City are suspended until September 6 at the least.

Accepting the harsh truth that the world isn’t going back to normal anytime soon, studios are fast sending smaller-budget films to online platforms.

Disney+ is set to premiere the musical on July 3, on the eve of the American Independence Day. In a fitting tribute to the Founding Fathers’ memory, the story of free America’s first Treasurer will be for all to enjoy.

The story of Hamilton, a man famous for being a public abolitionist of his time, also comes at a crucial point in the country’s history when millions of its citizens are out on streets, questioning what it means to be American again.

However, Hamilton’s opinions on slavery have been more than straightforward and it will be interesting to see how the film’s launch will restart debates around American history and slavery, once again.

How the American population will receive the story of Hamilton will be an interesting one, given the Disney premiere is bound to have the Broadway spectacle reach a much wider audience.

The musical tells the story of US founding father (and first Treasury Secretary) Alexander Hamilton. The Thomas Kail-directed movie is actually the stage show, shot all the way back in 2016 with the original Broadway cast.

The Pulitzer-winning drama was conceived while Miranda was reading Ron Chernow’s 2004 biography of Alexander Hamilton, “the show revisits our nation’s extraordinary birth and explores its unique, complicated promise,” critic Elysa Gardner wrote in a 2015 review.

Hamilton’s hard-knock upbringing is emphasized in the play. Right from his birth out of wedlock while living on the sugar farms of West Indies, orphaned before he reaches his teens, earns a college scholarship and arriving in the Revolution-era New York. It has it all.

In addition to the 2016 Pulitzer Prize for Drama, the original Broadway show had won 11 Tony awards as well.

Jonathan Groff, Phillipa Soo, Christopher Jackson, and others are also in the star-studded cast. 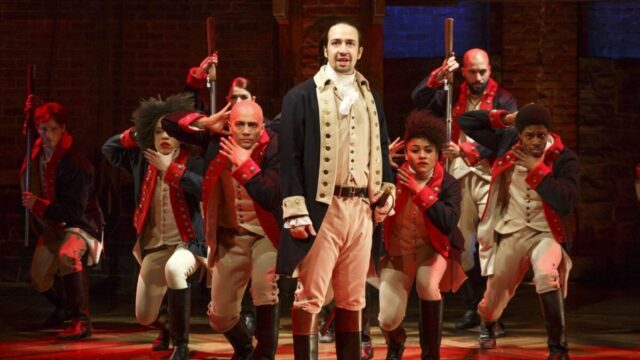 Hamilton Premieres on Disney+ July 3, Watch it for FREE!