Endeavor is currently the #1 ranked hero in the BNHA universe. However, he has been portrayed as a bitter and mean protector of justice. His abusive relationships with Shoto Todoroki and Rei (his wife) have aligned the fans to Shoto's side, resenting Endeavor as much as Shoto does. Endeavor is disliked by a majority of the fanbase. However, there may be a redemption arc on the way for this mighty hero.

In chapter 248 of My Hero Academia, titled "One Thing at a Time", we get to see the dynamic trio, Katsuki, Izuku & Shoto, training under Endeavor. At the start of this new work-study, recently mandated by the government, the Pro Hero gives Izuku a lesson that he is unlikely to forget anytime soon. On a mission, Izuku is lectured by Endeavor, saying:
"Work on your Air Force of whatever until it becomes second nature. Forget about the second ability for now,"

This confused Izuku a bit as he is supposed to grow as strong as possible as fast as possible and working on his additional Quirks seemed like a good idea to him. However, Endeavor believes that such a distraction would bring more harm than good. "Everyone out there does it every day. Even subconsciously. See that guy driving down there? The one yawning? You think he woke up one day knowing how to drive? … He practised all that, one thing at a time, until he didn't have to think about it anymore," Endeavor explains. "No matter how strong your power is, the foundation's gotta be built on steady diligence."

With the experience that Endeavor carries on his shoulders, this lesson is definitely not supposed to be taken lightly. Endeavor has struggled to surpass All Might all his life and he has gone through hell to train himself to be as strong as he currently is. With the untimely removal of All Might as #1 hero, Endeavor had to fill up the spot by default. Still, he is visibly unhappy with this development. A redemption arc for Endeavor to prove his worth as #1 hero and to fill All Might's shoes maybe sooner than we might think.

My Hero Academia or Boku no Hero Academia is the story of a quirkless boy Izuku Midoriya and how he backed the greatest hero alive. Midoriya, a boy who has been admiring heroes and their ventures since the day he was born, came into this world without a quirk. On one fateful day, he meets All Might the greatest hero of all time and discovers that he was quirkless as well. With his diligent attitude and unwavering spirit about being a hero, Midoriya manages to impress All Might and is chosen to be the heir to the power of One for All. Upon inheriting, he gets access to all the abilities of the No 1 hero.

My Hero Academia Treats Shigaraki's Awakening With an Invincible Ally 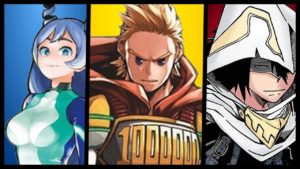 Will My Hero Academia Season 5 Be Delayed?