Skip to the content
Tags
SPOILERS AHEAD! This page contains spoilers from Black Clover.

Asta and Liebe rekindle their united resolve to takedown Lucifero and avenge Licita by merging into the pinnacle of Anti-Magic embodiment. The brothers are now unbeatable with a fifth horn and Magic nullifying touch.

Besides stopping the Lucifero’s lethal punch dead in its tracks, Asta sliced off the arms that impaled his Captains and kicked the Supreme Devil square in the face! All while neutralizing every move the King of Hell threw at him!

While Yami was pleased that he was right about Asta being special, Nacht faintly questions if he finally achieved True Devil Union.

But with a week still left for the next chapter’s release, the answer to that question will have to wait. So, for now, let’s try to decipher Asta’s new form and the potential outcome of his epic battle with Lucifero.

Contents
1. Did Asta unlock True Devil Union? Is it too OP?
2. Is he Way too OP?
3. Is Lucifero going Down in the Next Chapter?
4. What are Adrammelech’s Motives?
5. But why would he Risk being tortured should his plan go Awry?
6. About Black Clover

1. Did Asta unlock True Devil Union? Is it too OP?

Asta’s likely at the infancy stage of True Devil Union. Although it isn’t explicitly stated, there’s plenty of evidence to support it.

Firstly, he’s sharpened his control over Anti-Magic to the extent that only physical contact is sufficient to render even the King of Hell’s attacks useless.

Unlike in previous battles where he had to rely on Anti-Magic coated swords, he can now go on the offense and defence by either inflicting massive levels of damage with a couple of punches and kicks or simply withstanding a barrage of mystical spells and attacks.

Secondly, his fifth horn indicates he’s attained a rank higher than Lucifero in the hierarchy of the Qliphoth Devils.

So the fact that he outclassed a Supreme Devil and surpassed Liebe’s low-ranking status practically screams a Devil Union that’s never been seen before!

Thirdly, his Devil Union evolution has been foreshadowed from the start. With every ounce of demon power he extracts, there’s been a marked increase in his access to Anti-Magic.

Starting in chapter 97, Asta defeats Ladros with Black Meteorite after borrowing a portion of Liebe’s power.

He later goes full Black Asta Mode against Zagred after he channels more Anti-Magic, and subdues the demon with Black Divider.

Following this, he briefly entered Berserk Mode when he faced off with Dante and finally unlocked the first Devil Union form for five minutes against the Ancient Demon, Lilith and Nahamah.

While it’s a relief the Magic Knights now have the ultimate trump card against the Underworld, fans are worried that Asta’s intense power-up will overshadow the rest of the cast and the villains.

Asta is definitely soaring above every Devil and Mage right now. But it’s only temporary, as he’s saddled with a fixed timer on his OP boost.

Now that Black Clover has reached the critical stage of a shōnen protagonist’s peak transformation, there will be drawbacks to balance the MC’s abilities.

Weaknesses could include a longer interval between Devil Unions, extra toll and damage on his body, and the risk of losing your soul or being entirely replaced by Liebe.

Although the latter is debatable since their perfect Devil Union was achieved with the common goal to avenge Licita, the Curse of Weg and the Forbidden Magic surging through Asta should follow canon ill-effects to prevent the stereotypical MC power-up plot armour.

While all Devil Union forms have exhibited their respective shortcomings, Weg’s Curse is yet to be explored.

Weg means “way, path” or “gone, missing, vanished”, translated from German and Dutch. With a potent threat of losing one’s humanity in a ‘choosing your destiny’ themed story, you can bet it’ll be Tabata’s first pick to develop Asta and Liebe’s characters.

3. Is Lucifero going Down in the Next Chapter?

Lucifero’s defeat isn’t guaranteed even though Asta has awakened his ultimate Devil Union.

While the Supreme Devil is at a disadvantage with Asta’s Anti-Magic badassery, time’s on his side as the clock’s counting down real fast for the Black Bull cadet.

It’ll be the most nerve-wracking five seconds of Asta’s life, as he only has one shot at destroying Lucifero or sending him packing to the Underworld via the portal.

However, Lucifero won’t go down without a fight. Besides having absurd amounts of power that beat the Captains to a pulp, he’s already infuriated with a ‘magicless piece of trash’ challenging him.

Granted, Asta’s in a league of his own and can easily pummel the Demon King now, but there’s also the worst-case scenario where he runs out of juice. The excruciating fallout of successive Devil Unions is a definite game over.

However, seeing that five seconds can be stretched out for pages and that Asta and Liebe deserve to avenge Licita, I doubt a crushing defeat at Lucifero’s hands will happen.

But one-shotting Lucifero will be a disservice to his character and the lead-up he’s had as the final boss of the Spade Kingdom Raid arc. At the same time, Asta’s upgrade has to be shown off now that the stage is set.

So, we either go the ‘MC OP route’ with Lucifero getting absolutely wrecked, or we naturally build up Asta’s newly acquired form by giving him an L even after significant damage is dealt to the King of Hell.

But if we’re going with Asta’s defeat, it could mean the death of Yami. Since the Captain’s Dark Magic keeps the portal operational, he’ll have to sacrifice himself to close the gates and deport Lucifero to the Underworld.

Even though it’ll be a major heartbreak to see one of them go, it actually works quite well for Tabata and the story.

Besides taking the stigma of not killing his characters off Tabata’s back, it’ll also be excellent motivation for Asta moving forward.

Adrammelech has been sitting pretty on his floating rock ever since the cataclysmic battle between Lucifero and the Magic Knights commenced.

Besides not lifting a finger to aid his King, he outright disregarded his orders when he was explicitly commanded to fight Yuno and Mereoleona.

But since he ‘supposedly’ serves Lucifero, his disobedience makes you wonder what the peculiar Devil is planning and where his loyalties actually lie.

Based on Robert Silverberg’s novelette “Basileus”, Adrammelech is described as “The enemy of God, greater in ambition, guile and mischief than Satan. A fiend more curst—a deeper hypocrite.”

Demons are well-known for being the least trustworthy creatures in the universe. So, rising above the ranks via betrayal and subjugation isn’t above them.

While the thirst for power and freedom could be a significant driving force in Adrammelech’s actions (or inactions), the line “greater in ambition” is worrying when we realize the threat he may pose in the future.

He could be waiting for the opportune moment to gain the upper hand on Lucifero when Asta weakens him.

And seeing there’s no immediate punishment for deviating from the rules of the hierarchy, Adrammelech is likely hoping to swiftly end Lucifero’s reign once and for all.

5. But why would he Risk being tortured should his plan go Awry?

According to Christian demonology, Adrammelech has a twin brother Anammelech, who was cast into the fiery pits of Hell by Satan/Lucifer for failing to recruit Cain, Adam and Eve’s firstborn.

So, it would make perfect sense for himto backstab Lucifero, take the throne and release his brother from his eternal torment. 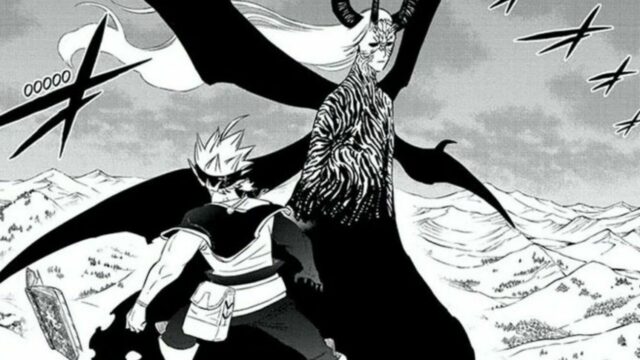 Will Yami and Asta Defeat Lucifero? Is he the Final Villain?