With the Great Raitai Tournament Saga ending spectacularly, a new season has been announced to air in 2021 that will act as the sequel to Baki: Dai Raitaisai-hen series.

Fans are excited to see their favorite characters once again and see how much they’ll progress this time around.

While the main attraction still remains the fight between the Hanma duo, Biscuit Oliva has flamed the audience’s curiosity.

With his defeat against Nomi no Sukune that almost resulted in his death, his power ranking has fallen.

However, Oliva still remains one of the strongest characters on the show, and his return is dearly anticipated. Before the next season airs, let’s take a look at some must-know facts about Biscuit Oliva, aka “Mr. Unchained.”

Baki series is set on a realistic Earth where it etches out well-developed characters with various goals and motivations. Most characters are based on actual people and even assume similar powers and purposes as them.

Biscuit Oliva, also known as “Mr. Unchained,” is based on the former Mr. Universe and three-time Mr. Olympia – Sergio Oliva.

Furthermore, the creator of the series has also referenced the famous strongman Eddie Hall In Baki-Dou (II), where during the fight between Oliva and Nomi no Sukune II, it was mentioned that the former could lift 500k of deadlift.

READ:  Which Baki characters are based on real people?

2. Strongest Man in the USA

Biscuit Oliva is the strongest man in the USA and definitely deserves this title.

He is shown to be powerful enough to make the United States Governmentcater to his every wish, while they use him as a bounty hunter that goes around arresting criminals that standard law enforcement units can’t handle.

We see Oliva’s true power when even a bullet shot at point-blank didn’t affect him as his muscles were strong and dense enough to absorb the impact.

He has also been known to pull helicopters to the ground as mere training, punch through steel doors, and lift 500k of deadlift.

Oliva works as a bounty hunter for the USA, which results in him living in a very unusual home, to say the least.

Biscuit Oliva enjoys complete luxury, such as elaborate meals, gigantic living quarters, a library, and all the other expensive things he needs in exchange for him living in the Arizona prison itself.

While the reasoning behind it, i.e., to keep the prisoners in check, is understandable, who would have imagined that the USA’s strongest man would have prison as his home.

Oliva was already quite respectable (at times), but the recent discovery about his love life has made him even more likable.

Biscuit Oliva has a girlfriend named Maria and cares deeply for her.

Formerly slim, after taking some medication because of an unknown disease, Maria became morbidly obese. In fact, her obesity has led her to be confined to her bed for the rest of her life.

The relationship she shares with Oliva is disturbing and toxic, as many factors come into play other than love.

While Oliva tries very hard for Maria, she sometimes treats him with contempt, which can be considered a result of her frustration about what happened to her body.

Nevertheless, Biscuit Oliva seems impossibly forgiving and stays by her side even now.

Biscuit Oliva came face to face with Yujiro Hanma, but unfortunately, we didn’t get to see the epic showdown between them.

While working as a bounty hunter for the USA, after fighting his way through groups of drug cartel mercenaries, he encountered Yujiro at the leader’s mansion.

While Oliva tried to attack him, Yujiro simply dodged and surprised him with a front kick that knocked him several feet back. In the end, “Mr Unchained” was not a match for the “Ogre,” and it was way too early for them to face each other.

Biscuit Oliva and Nomi no Sukune II fought against each other as per the latter’s suggestion.

However, despite being the strongest man in the USA, Biscuit Oliva succumbed to his opponent’s power resulting in him being defeated and almost killed by Nomi no Sukune II.

While Biscuit Oliva is still alive thanks to the wooden floor and timely medical aid, he suffered from life-threatening injuries and came impossibly close to death. However, he is recovering, and fans can’t wait to see how he will progress.

READ:  Who defeated Biscuit Oliva in Baki? Is he dead? 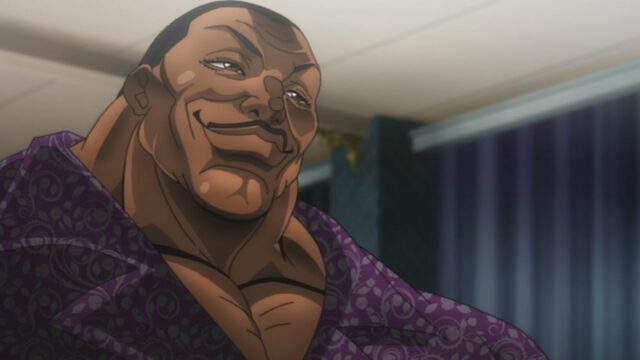 Who defeated Biscuit Oliva in Baki? Is he dead?