I’ve been an avid fan of the Naruto franchise since the early 2000s. And because I have an affinity for characters like Naruto, Sasuke, Sakura, and Hinata, I can’t help but also follow the adventures of the Boruto series!

There are many interesting characters and storylines in Boruto, and with that, merchandise. From plushies to key chains to figurines, fans of the anime will surely enjoy the products listed below!

The Boruto merchandise below are according to the characters’ popularity, their relevance in the series, the item’s utility, availability, and enjoyability!

This page contains spoilers from Boruto: Naruto Next Generations.

Why not add Boruto Uzumaki to your growing collection? We know that Boruto is resentful of his father in the beginning. But as the series grows, don’t you just love it how he attempted to reconcile with his dad?

And that’s one thing I truly love in the Naruto franchise: reconciliation, whether that’s with friends or families. So, why not grab this 8-inch Boruto plushie while it still available?

It’s one of the cutest toys out there and you will surely snuggle it with all your might.

Sarada Uchiha is the spitting image of Sasuke sprinkled with Sakura’s spunkiness! Although she is emotionally disconnected with her father, she eventually meets him eye-to-eye with the help of Naruto.

This is one of the reasons why I love the Boruto franchise so much! On one hand, it emphasizes the adventures and growth of the kids whose adventures are generated for today’s audience.

On the other hand, it shows the kids as “extensions” of their parents — the original cast: Naruto, Sasuke, Sakura, and Hinata.

In any case, this 2 and 3/10-inch Sarada metal key chain will always help you remember of Sasuke’s bravery, his love for Sakura, and his friendship with Naruto.

Now here’s a Shikadai key chain featuring the only child of Temeri and Shikamaru Nara. Shikadai seems to be lazy at first despite his upbeat and energetic personality.

But as the member of Team Moegi, he possesses a strong sense of justice whose good morals conduct surpasses others! And although Shikadai and Boruto are rivals in many things, Shikadai is close to Hinata (Boruto’s mom).

When Hinata asked Shikadai to watch out for her son, it seems that Shikadai is listening. It may seem that this is an obligatory request, but his rivalry-friendship relationship with Boruto proved otherwise.

So, why not remember Shikadai through this PVC key chain? You may even gift someone with it while it’s still currently available!

Don’t you think this Boruto metal key chain so cute? Here’s little Boruto putting his hands together as if he’s about to perform Ninjutsu or extract chakra from his body!

And his smile always seems so mischievous as if he’s always on-the-go! You can put this Boruto key chain in your schoolbags so your friends can notice that you’re an avid fan of the series.

Alternatively, you can also give this key chain as a gift to your anime-loving friends!

One thing I love about the Boruto franchise is camaraderie! In this messenger bag, you can see the elite Team 7 (Boruto, Sarada, and Mitsuki) on battle mode. Each one has their own stories to tell from family relationships to growing up.

At the end of the day, they’re pre-teens who also struggle with their own insecurities. And that’s what I love about Shōnen Jump. They establish characters in their franchises that reflect their audience’s dilemmas.

Without these dilemmas or troubles facing these emotionally struggling pre-teens, Boruto and his friends will merely be 2D characters with flat emotions, These fictional characters will be disconnected from their audience if Shōnen Jump doesn’t concoct heartfelt stories filled with hope, love, friendship, effort, and victory.

We need more limelight for Mitsuki. And I hope this 3 ¾-inch Pop! Vinyl Figure will catch anime fans’ attention. As many fans know, Mitsuki is a tragic character in the series.

He’s a synthetic human cultivated from the same embryo as his older brother. In other words, he’s a clone. But this clone needs to find his identity in the world.

And upon discovering the existence of a boy named Boruto (through a gift from his “foster father”, Orochimaru), Mitsuki set out on his journey to find and befriend him.

Other than this dark past, fans love Mitsuki’s ice blue tousled hair! It matches his calculating and calm character despite his cheerful personality.

If you think Sasuke will take a backseat in Boruto, well, think again! Fans love his character development so much in the original Naruto series that the Boruto franchise wouldn’t be the same without him.

Sasuke is the “dark knight”, and Naruto is the “shining prince”. And though Sasuke perceives Naruto as a rival, he also sees him as his best friend. Neat, right?

Sasuke’s storyline as an international criminal during the Fourth Shinobi World War is essential to his character and redemption arc. And as a fan, I’m so glad to see Boruto as Sasuke’s disciple!

Many fans love Sarada because she is Sasuke and Sakura’s daughter. But what I love about Sarada is her friendship dynamic to Boruto.

In the same way that Naruto and Sasuke have this rivalry-friendship dynamic, I can see that being reflected between Boruto and Sarada!

And so, this 3 ¾-inch Pop! Vinyl Figure reminds me of that. While Sarada has a temper like her mom, her aloof and calm personality came from Sasuke! And that makes her a great match for Boruto!

Here’s 3 ¾-inch Pop! Vinyl Boruto Figure. We can clearly see here that this little kiddo is ready to unleash his powers on his enemies! But the storyline that I loved most about Boruto is his strained relationship with his father.

Naruto is the Seventh Hokage of the village. And because of his numerous duties in performing this job, he doesn’t have quality time to spend with his son. That’s why Boruto aspires to be a shinobi like his mentor, Sasuke.

It’s kind of ironic if you think about it. Instead of Naruto forming that father-and-son bond with his child, his rival-friend (Sasuke) took that opportunity.

But as I’ve stated before, I love the friendship and dynamics in the series, and will continue to follow them wherever Masashi Kishimoto takes them.

You can’t have a Boruto show without putting Naruto even as a cameo character! And that’s the best thing about this franchise: it shows the original casts of the series even if the Naruto anime ended decades ago!

It’s great to see Naruto as the shinobi of Konohagakure. He’s now the head of the Uzumaki Clan and also a dad! So, when you purchase this 3 ¾-inch Pop!

Vinyl Figure when it comes out on April 2021, you can buy it in its base form or power mode! 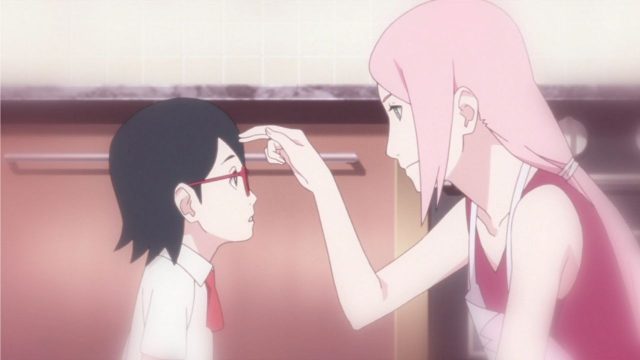