One Piece chapter 1061 had a bunch of unexpected surprises, but the revelation of Dr. Vegapunk has shaken the fandom.

One of the most underrated mysteries in One Piece is the identity of the leading Marines genius scientist, who has kind of been omnipresent in the series without ever really making an appearance.

Chapter 1061 revealed a young woman identifying herself as the genius Dr. Vegapunk. This is indeed the legendary scientist – but not in the flesh. Vegapunk seems to be talking through the girl, who has a suit marked as “Punk 02.”

Contents
Is Dr. Vegapunk female? Why is the girl not really Vegapunk?
Is the girl from the latest chapter a red herring?
About One Piece

Is Dr. Vegapunk female? Why is the girl not really Vegapunk?

Vegapunk has been confirmed multiple times to be male.

Characters like Bartholomew Kuma, Caesar Clown, and Koby have referred to Vegapunk as “he”, and Oda himself in SBS interviews has mentioned Vegapunk using male pronouns.

The biggest reason that the girl can’t be Vegapunk’s true form or body is because Vegapunk, by story and logic, is actually quite old.

Vegapunk has been around a while now, having been an active member of MADS, the illegal scientific research team active at least over 24 years ago.

This was when Vegapunk worked with Caesar Clown, Vinsmoke Judge, and Queen on things like the Lineage Factor – also known as the “blueprints of life itself.”

All the 3 members of MADS are known to be middle-aged men, so the idea that Vegapunk is actually a young and very attractive girl, just doesn’t sit right.

Vegapunk sure has a lot of achievements under his/her belt for them not be at least in their early 40s.

During the Enies Lobby arc, Koby mentioned that Vegapunk coated Marine ships with seastone to avoid them falling prey to Sea Kings.

Vegapunk is the one who propagated research into the history and properties of Devil Fruits, and the one to create Momonosuke’s artificial Devil Fruit. Vegapunk turned Franky into a cyborg, created the Pacifistas, as well as the new Seraphim models shown in chapter 1059.

READ:  One Piece Chapter 1059 Breakdown and What to Expect Next!

Additionally, in chapter 658, a G-5 Marine also calls Vegapunk an “old geezer,” so it’s quite obvious that Vegapunk, even if he isn’t a “he,” isn’t a youngster for sure.

We all would love the smartest scientist in the franchise to be the hot young thing in chapter 1061, but I don’t think Oda is going to make it that simple for us.

Is the girl from the latest chapter a red herring?

The girl from chapter 1061 might be a red herring distracting us from the true Dr. Vegapunk; however, her pattern of speech and dialogue make it seem that it really is Vegapunk talking to the Straw Hats.

When the girl emerges from the giant Vega Force robot, she has on a suit marked as “Punk 02”. The robot itself has the number 12, which the mecha shark that attacked the Thousand Sunny is marked “Punk 03”.

This has many fans thinking that the girl in chapter 1061 is actually not Vegapunk but one of his many creations, i.e., a robot or cyborg of some sort, or some kind of android.

Fans like to think that the young woman is a remotely controlled robot with Vegapunk speaking through it but I don’t really buy into the robot theory.

A more likely alternative is that she is a clone, since we know that the Marines had Vegapunk dabbling in Lineage Factor and cloning.

We also know that when Caesar’s chemical weapon went off, there was a giant explosion which Caesar escaped due to his Devil Fruit. Vegapunk probably suffered huge injuries physically, and somehow managed to implant himself into another body.

Lineage Factoring would allow him to modify any body, which would mean that a female or male body would work equally for him.

Jewelry Bonney also says that Egghead Island, which is the place where Vegapunk apparently runs their lab and research, is 500 years in the future when it comes to technology.

This means the Vegapunk’s genius has evolved to such a degree that indeed anything is possible.

Maybe Vegapunk didn’t want to be old anymore and transformed his body to look like the girl we saw in chapter 1061.

Maybe Vegapunk split his consciousness into multiple fragments, creating an entire army of Vegapunks (Punk 01, 02, 03…) so if one was damaged or caught there was always another. Kind of like a Horcrux.

Some people also believe that the girl is actually Vegapunk’s daughter or niece but the speech pattern that the girl uses in the manga is used by older people. In the original Japanese version of the manga, the girl uses the first pronoun “washi”, reserved for elderly men.

One thing is certain: things aren’t what they seem like on the surface.

The young woman might claim to be Dr. Vegapunk and she very well might be, but that not all there is to it.

A crucial thing to note is that whenever Oda brings in an important character or someone we haven’t seen in a while, he introduces them in the titular font typical of his manga.

We didn’t get any official intro for Dr. Vegapunk.

This may or may not actually mean much, but until we get an update following Vegapunk’s true identity, we only have this much to go by. 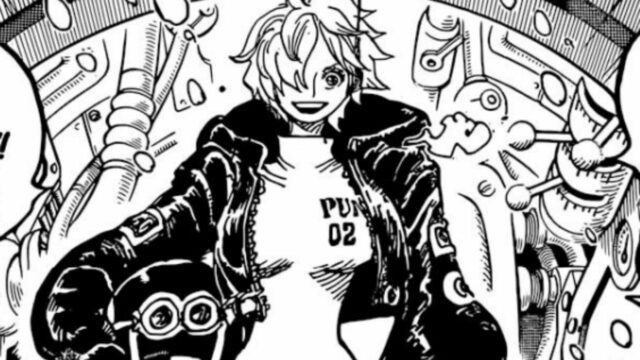