Sasuke and Sakura, both members of the original Team 7, ended up marrying each other. However, unlike Naruto and Hinata’s relationship development, there wasn’t much shown in their case.

Even their marriage was left unconfirmed in the Naruto series and was only acknowledged later in the Boruto series. The question that now arises is when did they get married? Does Sasuke really love Sakura?

1. When was Sasuke and Sakura’s wedding?

Sasuke and Sakura’s marriage has not been shown in either Naruto or Boruto: Naruto Next Generations. While there are not any scenes about their marriage, there is a photo displayed in Boruto episode 21, which is a small hint to their wedding.

It is assumed that Sakura and Sasuke got married during their travels together. Soon after, Sakura gave birth to a daughter named Sarada.

2. How and when did Sasuke fall in love with Sakura?

Sasuke has always been grateful for Sakura for loving him despite not reciprocating her feeling until the series conclusion.

He has held deep feelings for Sakura, which are eventually restored and grown stronger once his hatred and desire for revenge fades away.

While Sasuke often dismissed Sakura’s crush on him, during their time together in Team 7, Sasuke was shown to have developed a soft side for Sakura. It was to the point where he told Naruto to do everything to save her from Gaara.

It has also been revealed that both Sakura and Sasuke complement each other perfectly. After going on missions and journeys together, Sasuke’s love for her blossomed and led to them understanding each other quite well.

Sakura is one of the few people Sasuke really cares about. As one of the members of Team 7, he shares a lot of fond memories and feels strongly about her.

There has been a lot of heated debate on whether Sasuke really loves Sakura. One of the main contributing factors towards such debates is Sasuke’s prior indifference towards her feelings.

After Sakura tried to stop him from leaving the village and going down the path of revenge by confessing her love for him, while Sasuke did not accept her love, he did break his indifferent attitude by thanking her and carefully laying her down on a bench.

While Sasuke did try to kill Sakura in the later parts of the show, he did so because he wanted to cut out anything that made him waver.

He was set to follow his path to revenge and thus wanted to get rid of Sakura, who could make his want to return to his normal self.

After the final battle with Naruto, Sasuke let go of his hatred and desire for revenge and sincerely asked Sakura for forgiveness.

He was now ready to trust others and build close relations. To Sakura, who loved him throughout her life, this was a touching moment.

Later, before leaving for a journey to redeem himself, he expressed a desire to start a relationship with Sakura and promised to meet again.

They did indeed meet later and even traveled together for an extended amount of time. During this, time their love blossomed and led to marriage and the birth of their daughter.

While many argue that Sasuke does not love Sakura due to him leaving her alone for long periods of time, that is not true.

While Sasuke does love his wife, he still has his duties to fulfill towards the village and the Shinobi world. In fact, this might even be his way of keeping his family safe and away from all the chaos that follows him.

Even Kishimoto has stated that Sasuke was always grateful to Sakura, that even though he had to leave, even though he caused her so much pain, he was still thankful from the bottom of his heart and loved her.

4. Do Sasuke and Sakura have any children?

Sakura accompanied Sasuke during his travels to redeem himself. During this time, they got married, and Sakura became pregnant with his child. This lead to the birth of their daughter, Sarada.

Sarada symbolized the restoration of his clan and Sasuke’s love for Sakura. After she was born, they lived together as a normal family for a couple of years before Sasuke left home for an important mission that would take him away from his family for years.

Despite the distance, Sasuke regards Sakura and Sarada as the two most important people to him.

5. Should Sasuke and Sakura be together?

Sakura is one of the few people Sasuke really cares about. As one of the members of Team 7, he shares a lot of fond memories and feels strongly about her.

While Sasuke dismissed Sakura’s feelings for him and even went as far as attempting to kill her, it is believed that he did that to break any bond between them. He did that so he could entirely devote himself to his revenge.

After his battle with Naruto, when Sakura arrived to heal them, Sasuke redeemed himself a bit for the pain he put Sakura through by sincerely apologizing to her.

It should be noted that even though he was in a lot of pain, the first thing he wanted to do was begin setting things right by apologizing to Sakura. This shows Sakura’s importance to Sasuke.

One must also not forget that Sasuke’s story is a redemption arc. It’s the story of Sasuke realizing and acknowledging that he was wrong and spending the rest of his life making up for his mistakes.

However, he is not someone to stay with Sakura just out of guilt. It is because he genuinely loves her that he married her.

There is no reason for two people who love each other not to be together. 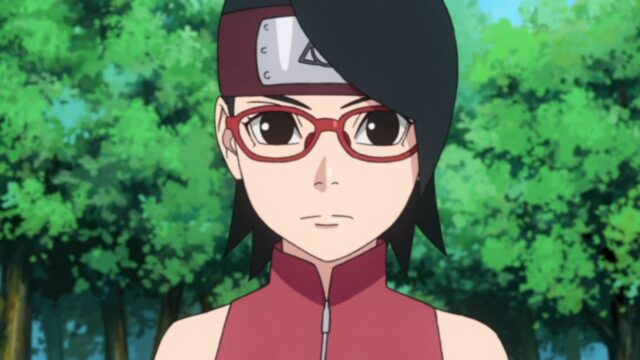