The Admirals of the Marines are a part of the military forces, meant to be able to fight effectively against the pirates and the Four Emperors.

Being soldiers of the World Government, the Admirals are in charge of maintaining law and order across the seas, and bringing pirates to justice.

There are only 3 Admirals serving at any given moment, and Ryokugyu is the most recent one to have joined of the trio, Fujitora and Kizaru making up the rest.

He stepped in to replace Kuzan after Punk Hazard, when Akainu was promoted to Fleet Admiral.

The guy is bound to be a terror in terms of strength and power.

Although Ryokugyu made his debut back in Chapter 905, in the Reverie arc, we know almost nothing about him – although, safe to say, the fandom isn’t too shy about hazarding their guesses.

Contents
What Powers Will Admiral Ryokugyu Have? What Is His Devil Fruit?
How Strong Is The Green Bull? Is He The Strongest Admiral?
About One Piece

What Powers Will Admiral Ryokugyu Have? What Is His Devil Fruit?

Ryokugyu, the Green Bull, will have immensely advanced Haki abilities, and will also be one of the strongest in terms of physical power.

Doflamingo called Ryokugyu and Fujitora “true beasts in terms of power”; going by this and the “bull” in his name, Ryokugyu can likely turn into a literal “beast”, with raw animalistic power.

If he is a confirmed Zoan user, Ryokugkyu definitely needs to have Mythical Zoan, to keep up with the hype. I mean if the Calamities have Mythical, it’s only fair that one of the Marines gets it too.

He might even have the ability to Awaken his Devil Fruit, which could well counter the possibly-Awakened Lead Performers and Tobi Roppo in the future.

This would make sense, since we are, after all, in Wano, the empire of Zoan-type Devil Fruits.

The one thing we know about Ryokugyu is that he was strong enough to become Admiral without having eaten for 3 full years.

Some fans have followed this line of reasoning to theorize Ryokugyu having some Plant-type Devil Fruit power. He is also shown saying that he was too lazy to eat, lounging under the sun in Mariejois with Fujitora.

If he has plant-like abilities, he can photosynthesize energy from the sun to turn it into sustenance. Also, the “green” in his name could make this theory a pretty obvious one.

But Ryokugyu’s Buddha-like ability to fast can also be explained through other theories. A Crocodile Devil Fruit could be the answer.

First of all, crocodiles are green. They are primeval creatures, strong enough to have battled dinosaurs. They can go long periods without eating, and will typically not move unless absolutely necessary.

Additionally, a male crocodile is also called a bull – albeit in English and not in Japanese. This could be a clever ruse on Oda’s part, who is well-aware of his English-speaking audiences.

Other likely animal options for Ryokugyu’s Zoan Devil Fruit, could be a new form of the Ushi Ushi no Mi (Ox) series; the Ryu Ryu no Mi (Dragon) series; some animal with plant-like characteristics/powers, like a Treant, a Dryad or Pan from Greek mythology, or a Cernunnos from Celtic mythology, or something entirely new from an unnamed Zoan Devil Fruit.

At the same time, it does seem off for the Green Bull to have any animal other than a bull.

How Strong Is The Green Bull? Is He The Strongest Admiral?

Ryogukyu or Green Bull is likely the most powerful current Admiral (excluding Akainu, the Fleet Admiral), since he will fight Zoro, the strongest after Luffy in the Straw Hat Pirates.

The first reason for this conclusion, I admit, isn’t too strong, but it does make sense. Based on the color scheme, Akainu and Luffy follow a red theme, Sanji and Kizaru have a yellow theme, and Zoro and Ryokugyu are green. But let’s come back to this in a minute.

From what we know of the Admirals, the first word of their epithets are colors that represent their element, power, or techniques, while the second animal part of it signifies their personality or characteristics.

Akainu, the Red Dog, can control red magma, and has a dog-like loyalty to his post and responsibilities. Kizaru, the Yellow Monkey, can manipulate yellow light, and has a whimsical, callous, casual attitude, not unlike that of a monkey.

Fujitora, the Wisteria Tiger, can manipulate gravity, widely associated with the color purple, and is a master swordsman, the tiger being representative of a swordsman in Japanese culture.

Their techniques too, are named after their aliases – for example, Akainu’s Hellhound technique, and Fujitora’s Fierce Tiger.

An elemental connection can also be drawn: the previous Admiral trio had Akainu with Magma, Kizaru with Light, and Aokiji/Kuzan with Ice.

The current Admirals could have Kizaru with Light, Fujitaro with Gravity, and Ryokugyu with either time, or life force/regeneration.

Ryokugyu’s “green” could follow the logic of plants = nature = growth = life. If he can control time, he’d definitely be OP, and it would also make sense that he can go so long without eating – he can probably just bend time/dimensions to make it so he has always just eaten.

Speaking of Ryokugyu being OP, remember how Oda has the habit of saving the best for the last? Dragon and Shanks are enigmatic as hell; Ryokugyu follows in shadowy suit.

Zoro was able to defeat King in the recent chapter. I think Zoro will fight against Ryokugyu next, and that fight is going to be doubly difficult and dramatic because of all the speculations about the Green Bull being Zoro’s dad.

If we pit our heroes against the Marines in order of power, people would say Fujitora would go against Zoro, if Luffy goes against Akainu.

Even if you think Fuji is the strongest Admiral, he is the most likely amongst the Marines to quit and join the Revolutionaries.

We already know he kind of has a frenemy bond with Luffy, so he might avoid battling the Straw Hats entirely.

In this case, Ryokugyu, the strongest admiral alive, would step in to take on (his son!?) Zoro. 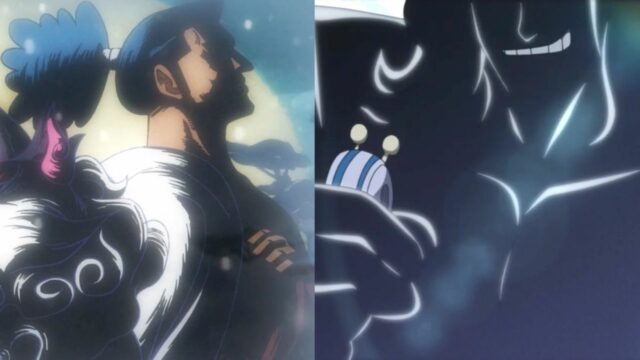 Is Shimotsuki Ushimaru alive? Is he Admiral “Green Bull” Ryokugyu in One Piece?