There is always a character in an anime, who is rarely criticized by fans. In Boku No Hero Academia this character is Shoto Todoroki. Todoroki has a quirk that gives him the ability to control both fire and ice. With his burnt face and a combination of red and white hair, he is a threat to any member of League of Villains or any student of UA when it comes to the Hero Provincial License. A recently released magazine shows off Todoroki’s quirk which highlights him as a Supreme Being.

Recently, Twitter user AitaiKimochi shared a page from this week’s Shonen Jump. It shows Todoroki helping his friends with both starting a grill with his fire quirk and giving ice in the summer with his ice quirk. This makes other UA students believe he’s a God or super diety.

Remember Midoriya vs Todoroki? Todoroki’s powers and the way he uses them is really impressive. The action between them, the moment they use their quirks, still gives me the chills. Although, Todoroki wins the battle and advances to final of the tournament at the end of that battle.

There are no major drawbacks to Todoroki’s quirk. As we experienced, Midoriya breaks his bones using his quirk, and Kamenari looks like nincompoop whenever he uses his quirk. The only obstruction for Todoroki, it seemed, is his own unwillingness to accept his father’s quirk ( fire) due to his ‘not so good’ relationship with his father- Endeavour.

Endeavour is the current strongest hero in the Boku No Hero Academia world. He is right alongside All Might for the number one spot. Endeavour is known as the flame hero. The moment when Todoroki overcome the hatred towards his father- Endeavour and accepted his fire quirk, is the moment Todoroki became one of the strongest heroes in the series. 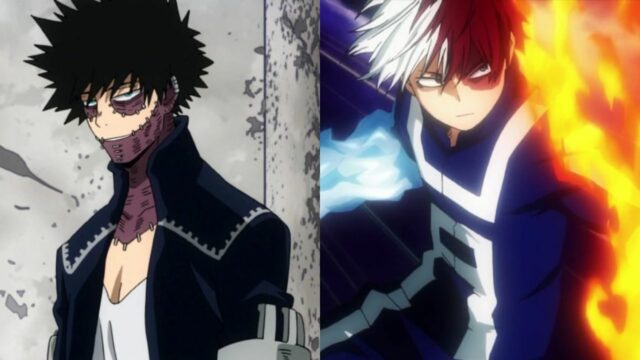 The Truth About Toya Todoroki! Does Shoto Know Dabi Is His Brother?