Fans have been looking forward to news about One Piece Film: Red ever since it was first announced in 2021.

We’ve just gotten a second trailer for the upcoming movie, a teaser from the actual film which confirms that One Piece: Red is going to be a definite banger.

But what’s gotten the fandom really hyped up are the new colored character visuals and theme art that were recently released on Twitter.

It looks like the theme for One Piece: Red is going to music, given the trailer and the posters. Our Straw Hats are in badass Rockstar x Pirate mode. And when I say Straw Hats, I also mean Jinbe!

Yes, this is the first time that Jinbe has been cinematically featured as a member of the Straw Hat Pirates crew. What’s more, his outfit has got to be one of the best out of all the Straw Hats.

Contents
Who Is Jinbe’s Makeover Inspired By?
What Is One Piece Film: Red? Is It Canon?
About One Piece

Who Is Jinbe’s Makeover Inspired By?

Jinbe’s new makeover is inspired by none other than the “King of Rock and Roll”, Elvis Presley himself. It makes sense that Boss Jinbe is impersonating the King for the music festival in One Piece: Red.

In his battle wear design, it looks like Jinbe is giving off major Yakuza vibes, which, let’s be honest, no one is complaining about. He’s sporting a black studded leather jacket and a cool new hairstyle in one of the posters.

In the group poster with the other Straw Hats, he’s straight up wearing the King’s attire – the famous white jumpsuit with the golden stars. That, along with his size and blue skin color, really makes him stand out from the rest.

What’s awesome about Jinbe’s look is that Oda, who made the concept art for the film, has shifted away from the usual Eastern-inspired look that we’re used to seeing Jinbe in.

That’s to say, that Jinbe is actually wearing pants! Glad to see such a bold makeover for the Knight of the Sea.

I also have to mention Jinbe’s Jolly Roger, featured along with his outfit design. This is instilling fans with so much joy – seeing our favorite big boy on the big screen for the first time – as part of the crew!

Joining in on the punk-rock brigade are Franky, Brook, and Ussop, the latter looking remarkably like a member from KISS.

Zoro and Sanji seem to have swapped personalities and clothes, whereas Luffy looks more Luffy than ever. Fans are loving Robin’s new look, but seem to be kind of disappointed with Nami’s outfit.

But Jinbe dressed as Elvis and being part of the Straw Hat crew for One Piece: Red has put the biggest smile on all our faces.

All in all, the artwork really has fans hyped for the film.

What Is One Piece Film: Red? Is It Canon?

It was announced to commemorate the 1000th episode of the series. One Piece Red is not canon, and will have no connection to the original manga storyline.

The film is set to revolve around Shanks and his daughter Uta. The Straw Hat Pirates will participate in a music festival on an unnamed island. That’s all the information that has been released about the plot.

Although the movie will not continue the original story, it looks like there are some connections to the main storyline. After all, Jinbe only recently became a Straw Hat member and the movie features him in that role.

We will also get the much-anticipated Luffy and Shanks reunion, along with a new mysterious character that might just be introduced in the main story later.

Remember when One Piece Film: Stampede gave us the name “Laugh Tale”? The conversation between Rayleigh and Roger from the film was also incorporated into the manga chapter 968.

Given Jinbe’s reveal as a Straw Hat member, and also Shanks’ involvement, it’s not entirely impossible for Oda to pick up something from One Piece: Red and put it into the next arc.

Either way, One Piece Film: Red looks amazing, and it’s sure to be the best OP movie till date. 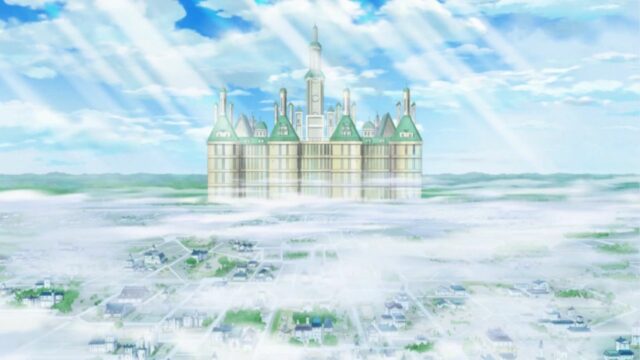