It’s no secret that Red-Haired Shanks is one of the most beloved characters in One Piece. Ever since he resurfaced in the main storyline through the recent manga chapters, fans have been going crazy.

Dude casually declared that it’s time to go after the One Piece, and then proceeded to show off his Conqueror’s Haki and scared Admiral Ryokugyu right off Wano.

We know hardly anything about Shanks, so when Oda reveals anything connected to him or his backstory, it’s a big deal. And there’s nothing bigger than family! Thanks to the latest One Piece movie, we now know that Shanks is actually a father!

With One Piece Film: Red, Oda introduced Uta as Shanks’s daughter. She is the world’s biggest diva, with an “otherworldly” penchant for singing. Shanks had to abandon her as a child but in the movie, he says, “Uta, though we’re apart, you’ll always be my daughter.”

Contents
Is Uta Shanks’s Daughter in canon?
Why did Shanks Leave Uta?
What does Uta do? Does Uta have a Devil Fruit?
Who is Uta’s mother? Who did Shanks have Uta with?
About One Piece

Is Uta Shanks’s Daughter in canon?

Uta is Shanks’s daughter in canon.

Beginning with chapter 1055, Oda has released a 3-part “Uta’s Special 1-page Manga” series, as part of the regular manga instalments in the Weekly Shonen Jump issues.

These extra scenes tell the story of how Uta is inspired to create her songs.

The first one, titled New Genesis, was released in Shonen Jump 2022 Issue 35 on August 1, 2022, preceding chapter 1055. It shows an unknown town which is being invaded by pirates. Everything has been set on fire, with houses burning and people being taken away.

In the midst of this chaos is Uta, trying to find a pen. She writes down what she calls her magnum opus with lipstick – amongst other items from her bag – on the walls as the city burns around her. She calls this new song New Genesis.

The second of Uta’s special manga gives us more proof about her being a canon character. The World’s Continuation, released in Issue 36-37 on August 8, 2022, along with chapter 1056, begins with Uta waking up from a nightmare. It is the burning town with people running through flames.

She gets out of bed and goes to the window, where the sun is rising, reminiscing about her childhood. We see the silhouette of Shanks with little Uta trailing behind him.

She starts fishing out crumpled pieces of paper from her bin and finds one with some lyrics on it. She continues the lyrics on a fresh piece of paper, finishing the song we know to be The World’s Continuation. It ends with the lines:

Till again we meet…
Outside a dream.

Further proof that Uta is Shanks’s daughter in canon, is that in One Piece Film: Red, Luffy reveals that he knows who Uta is because they have grown up together.

In a flashback, we see that Luffy and Uta spent their childhood at Foosha Village, which was first revealed in chapter 1 of One Piece as Luffy’s hometown. This is where he met Shanks 10 years before his own journey as a pirate.

Turns out, Uta had been with Shanks all along, through the Red Hair Pirates’ journey to East Blue. At Foosha Village, Uta befriended Luffy. And it looks like Shanks was the one looking after the kids.

Another big indication that the events and characters of One Piece Film: Red are canon is that episodes 1029 to 1031 of the One Piece anime are set to focus on the relationship between Luffy and Uta.

With Shanks back in the game with chapter 1054, it’s possible Uta will enter the fray of the main story along with daddy.

Why did Shanks Leave Uta?

At some point after Uta and Luffy became friends, Shanks had to leave Uta.

According to One Piece Film: Red, Uta sings a forbidden song which accidentally summons an ancient monster that destroys the island they’re on. The town goes up in flames and this is the burning town from the manga special.

Witness to the enormous power his daughter holds, Shanks takes the blame for the catastrophe on himself and leaves Uta in the care of Gordon, the former king of Elegia Kingdom.

Elegia is the island where Uta organizes the music concert in One Piece Film: Red.

Since Shanks abandoned her and continued being a pirate, Uta somehow came to dislike pirates. In this aspect, she’s similar to Usopp, whose father, Yasopp, also left him behind to live the life of a pirate.

It’s likely that Uta doesn’t remember what she did as a child and that Shanks framed himself for her crime and had to leave her behind. This would explain why Uta hates pirates.

What does Uta do? Does Uta have a Devil Fruit?

Uta is the music superstar-daughter of a Pirate Emperor. She is not just a pop icon, but a genius musician with a voice that can “change the world.”

Uta has been streaming her music and videos via Den Den Mushi, gaining immense popularity worldwide. Her hit songs and status as a popstar helped her organize her first-ever live music concert in Elegia.

Uta has the Paramecia-type Devil Fruit Uta Uta no Mi, which can transport people’s consciousnesses into a virtual space by singing, where she can manipulate reality and control her listeners.

This virtual space is called the Uta World, where Uta can function much like a God. It is impossible for listeners to leave Uta World on their own. In addition, she can also control the real-world bodies of those trapped in Uta World.

A Devil Fruit worthy of a Yonko’s daughter indeed.

Who is Uta’s mother? Who did Shanks have Uta with?

The fandom has shipped Shanks and Makino hard since the beginning. Makino is the bartender-owner of Partys Bar from Foosha Village. She was introduced in chapter 1.

Since Makino is the mother of an unknown baby, fans loved to speculate that the baby was Shanks’s, which is the reason, they deduced, that Shanks came to Foosha Village in the first place.

In an SBS interview, Oda cryptically stated that father of Makino’s child is “probably that person,” but of course we have no idea what he meant.

But coming to Uta – fans think Uta’s existence debunks the fact that Shanks and Makino had that unknown baby together. But could Makino be Uta’s mom?

It’s very unlikely that Uta’s mother is Makino. Uta’s hair is half red and half white. There’s a good chance her mom has white hair given that the red side of Uta’s hair matches the exact shade of her father Shanks’s hair.

This also proves that Uta is Shanks’s biological daughter. 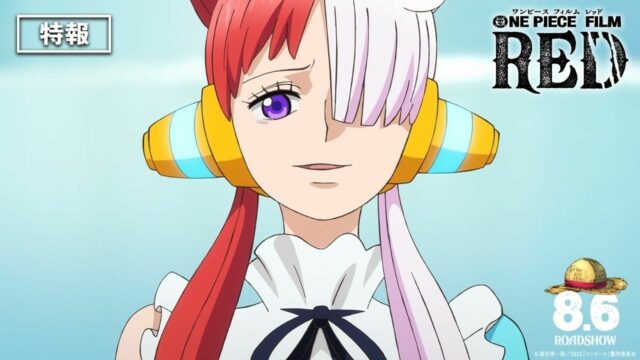