The adventures of Monkey D. Luffy and his crew in search of the legendary treasure – One Piece, have been serializing chapters for over two decades.

This 900+ chapter series is often regarded as the King of Manga because of it being the highest-grossing manga for a decade.

One Piece released chapter 990 on Sunday, titled “A Lone Force” So, it’s time to discuss the release date, scans, and other details for chapter 991.

Table of Contents
1. Chapter 991 Raw Scans, Leaks & Spoilers
2. Chapter 991 Speculations/Predictions
I. Sulong Form Minks
II. Drake Joins the Rebellion
III. Strawhats vs. Big Mom?
3. Chapter 991 Release Date & Highlights
I. Is One Piece On A Break This Week?
4. Where To Read One Piece
5. Chapter 990 Plot
6. Chapter 990 Cover Page
7. About One Piece

Raw scans for Chapter 991 of the One Piece manga have come out partially. Chapter 991 will be titled “Let Me Die!”

Luffy agrees to Drake’s request, but Zoro stops him. Jinbe and Franky also disagree. Zoro confronts X-Drake and they have a skirmish.

Meanwhile, Page and Ulti attack but Usopp and Nami draw their attention. Apoo shows up again and tries to attack, but is blocked by Zoro and X-Drake supposedly.

Inuarashi and Nekomamushi finally reveal their sulong form and Kinemon cuts Blast Breath from Kaido. Jack falls, it isn’t known if literally or figuratively, as in defeat.

Chapter 987 officially kicked off the war on Onigashima. With the declaration of an all out war against Kaido, Big Mom, and Orochi, Luffy drew a lot of attention to himself.

Since there is a lot going on at the same time, it is likely that we will see parallel storylines instead of just one.

The Mink tribe’s dreaded Sulong form was first hinted to us during the Zou arc and we saw it in action for the first time during the Whole Cake Island arc.

This form seemed overpowered, as someone like Carrot, who is relatively weak, became so powerful that she was able to take down dozens of ships by herself.

Chapter 987 ended with Nekomamushi pointing out that the full moon is visible. We will definitely see the devastating power of the Sulong form of Nekomamushi & Inuarashi in the coming chapters.

Chapter 990 showed us that X Drake has been kicked out of the Beast Pirates. For helping Law escape the prison, X Drake is now being hunted by Queen.

In this desperate situation, Drake reached out to Luffy to let him help in defeating the Beast Pirates.

Knowing Luffy, he will be able to sense the good intentions emanating from Drake and will let him join the rebellion forces.

While this is not a major help to the rebellion, they need every last bit of power they can to take down the Beast Pirates.

Wano’s matchups are turning out to be even messier than the matchups in Marineford. With so many insanely strong characters gathered in one place, we are bound to witness chaos.

Chapter 988 ended with Franky ramming his Kurosai motorbike into Big Mom’s face. This may lead to the Strawhats ganging up on Big Mom to delay her so that Luffy can go join the fight against Kaido.

While Kaido is surely going to be taken down at the end of this arc, Big Mom will definitely survive as her character arc will not end till Elbaph.

In the next chapter, we will be shown more events taking place in this epic war.

I. Is One Piece On A Break This Week?

Chapter 991 of the One Piece manga was on a break last week. The series will continue in the 43rd issue of the Weekly Shonen Jump.

4. Where To Read One Piece

Chapter 990, titled “A Lone Force,” starts by showing that Sasaki has escaped. The tree binding him was taken down from Big Mom’s attack and he is officially back into the fight.

We then see the scenes from Onigashima’s roof where the Minks are fighting Jack’s forces. At the end of this scene, we see the silhouette of Nekomamushi and Inuarashi’s sulong form attack Jack.

Back at the performance hall, all hell is breaking loose as both sides relentlessly attack each other. In the midst of this, King contacts all Tobi Roppo to inform them that the right to challenge an All-Star has been put on hold.

The Tobi Roppo are now given a new mission – stop anyone trying to climb to Onigashima’s roof.

In this chaos, we see X Drake and Hawkins having a conversation about the survival chances of “that man” being 1%. Who’s Who comes in and asks Drake for his help in taking down Queen while everyone else is busy.

The scene shifts to the fight where the samurai are trying to carve a path in the enemy forces for the Strawhats.

One of the numbers swings his giant mace towards them but is promptly disarmed by Zoro cutting his weapon in two. Luffy then goes in with his Gear 4 attack to take the number down.

Before the attack hits, we see Drake – beaten up and on the floor. Law escaping from the Flower Capital is traced back to him, and he is kicked out of the Beast Pirates.

Apart from the main storyline in the manga chapters, One Piece also advances the storyline by featuring scenes around the world in the form of cover stories.

Chapter 990’s cover continues the Gang Bege’s OH MY FAMILY cover story. Convinced by the proof given by Pound in the last chapter, Lola and Chiffon pull him to the ship.

Hopefully, this cover story will conclude soon, because frankly, it has gone on for too long.

The man who had acquired everything in this world, the Pirate King, is Gol D. Roger. The final words he said at the execution tower were 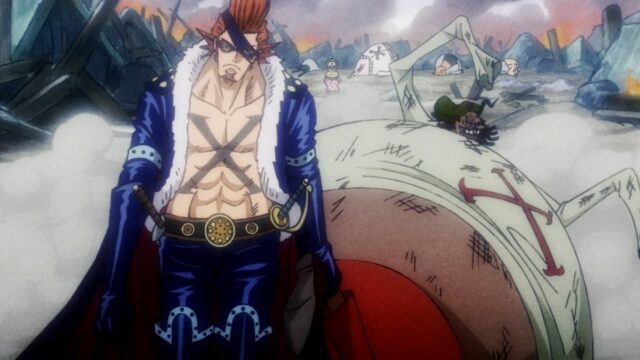 One Piece Chapter 990 Leaks Tease a MAJOR Death, Find Out Who…