If you ever catch yourself wondering what to watch on a cozy winter morning, Laid-Back Camp checks all your boxes.

Known for its “laid-back” storyline and stunning visuals of Japan that hits you right in the feels, this anime has turned out to be one of the most visually pleasing and heartwarming anime out there.

Written and illustrated by Afro, Laid-Back Camp is about the adventures of a bunch of friends as they travel to various campsites across Japan.

The official Twitter account of Laid-Back Camp revealed a new visual and characters designs from the much anticipated second season of the anime. The anime is set to start airing from January 7.

The above visual features all the main characters from the first season having a great time at the ocean. There is a text on the visual in Japanese which means: “I’m coming to see you tomorrow.”

Along with the visual, they also released the new and updated versions of the characters designs for Minami Toba, Sakura Kagamihara and Akari Inuyama. This was released to announce the return of the voice actors of these characters from season 1.

The story follows two adventure loving people, Rin and Nadeshiko, who find solace in camping and travelling across the country. While Rin likes to camp, Nadeshiko loves to take cycling trips to different destinations.

After an unfortunate meeting, Rin and Nadeshiko begin going on adventures together full stocked up with cup ramen and a newfound zest for life.

The second season of the anime will begin airing from January 7 onwards on Tokyo MX at 11 pm.

The first season premiered in January 2018, and Crunchyroll streamed the 12-episode series. 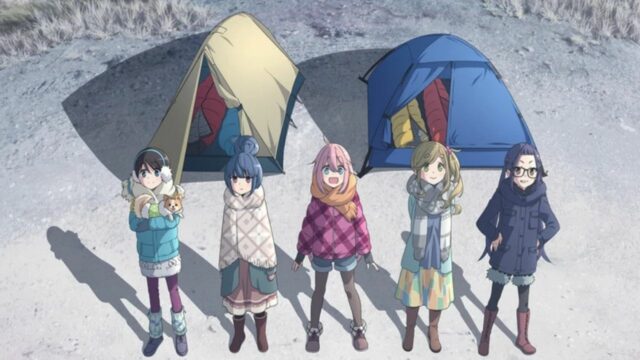