There’s no beating around the bush when it comes to Kaguya-sama’s war of love and brains!

But with Kaguya-sama to wrap up soon, fans are bound for a wild roller coaster ride of romances than what they would have gotten at a steady merry-go-round pace.

All members of the Student Council decided to study abroad.

So, in a possible future, we see how the Kaguya-sama cast is happily roaming around the lively streets of New York!

Despite their decision to study overseas, they are also in it for the fun!

Therefore, fans can still expect to see the gang taking pictures in front of Lady Liberty and hanging out in the luxurious malls on the Land of the Free!

Now that would be a fun-filled and happy-go-lucky ending! Wouldn’t you agree?

But, enough about these castles in the sky. Let’s ground ourselves and talk about the bewildering mindset of Aka Akasaka — the genius mangaka behind this crazy-in-love, one-of-a-kind, and golden goose of a rom-com series!

As many fans know by now, Kaguya-sama is nearing its endgame! And to corroborate this mind-boggling statement, there is an extra page from manga author Aka Akasaka himself on Volume 22.

The supplementary notes are a compilation of humble statements topped with the author’s gratification to readers on the series’ multi-layered success!

For example, the manga author’s many thank-you’ s emanated from the pages; but they also serve as some sort of a random “Afterword” that is accidentally misplaced midway on the series.

After all, this juicy extra page is found on Volume 22; so many readers thought that this “Afterword” is only for this manga volume and not the series’ entirety!

Nevertheless, Aka Akasaka himself stated that the series’ final saga will focus on molding Kaguya and Miyuki’s “specific” relationship!

In my opinion, no matter how the Kaguya-sama manga author puts bowties or gifts-wrap this beloved rom-com, it will depend on his mood and satisfaction. At the end of the day, he still wants to tie the loose ends on the series’ supporting characters!

For example, we still have Yu Ishigami and Miko Iino’s romantic potential to tackle with. But with Kobachi Osaragi and Komoro Shiranui serving as the frictional cogwheels of the blossoming relationship, how will Miko and Ishigami meet eye-to-eye?

When will Kaguya-sama end?

No one knows the year when the Kaguya-sama manga will end. The author even specified in Volume 22’s extra pages that he doesn’t know how long he should still prolong the series!

Like I said before, there is still a lot of loose plot points to tackle as the gang ventures within Shuichi’in Academy’s grounds. In addition to Miko and Ishigami’s romance slowly unfolding, Kaguya must flee from the grasp of her corrupt family!

Let’s face it. If she can’t stand up to her brothers’ manipulation and her father’s ignorance, the influential Shinomiya conglomerate will seep through Kaguya’s mind so she can be controlled and brainwashed again!

If she becomes weak-willed because Miyuki departed to the U.S., Kaguya may not be saved from her greedy family’s cruelty! In fact, her ex-boyfriend’s U.S. departure (due to overseas studies) might only give our lovely lady a fresh heartbreak out of the blue!

It’s going to be a sad chapter if and when that happens. So, as fans, we’re hoping we’ll only cry for Kaguya-sama manga saying goodbye to its fans for good (and not because of a cheap breakup between Kaguya and Miyuki!)

Note that Miyuki’s sights have been dead set on overseas studies for a long time. But if the situation calls, he might still decline his acceptance letter from Stanford University to remain by Kaguya’s side! That would be a (not-so) shocking twist!

Many different outcomes can happen. But no matter what paths Aka Akasaka set these colorful lovebirds on (whether it’s Miyuki & Kaguya, or Ishigami & Miko), fans are also hoping for a satisfactory conclusion on this “Love is War” game!

How many volumes will Kaguya-sama have?

No one also knows how many volumes the series will have as it leads towards its finale. Fans even may be disappointed that Kaguya-sama is only lasting 6 years with just 22+ volumes.

However, Aka Akasaka perceives the series as a success! Not only did the Kaguya-sama manga sell well; but there are also:

How will the author end Kaguya-sama?

In Volume 22’s extra pages, Aka Akasaka emphasized how he will focus less on the comedy side of this rom-com series. And since it is on its final saga, fans can’t take their eyes off lovey-dovey couples like Miyuki and Kaguya (as well as the shocking twists brought about by Kobachi and Miko’s special relationship)!

Fans are also expecting to see serious romantic relationships entangle our main and supporting cast as we race towards the finale!

It may be a few more years or a few more chapters down the road. We even have a Ballroom Arc that hasn’t taken place in the series yet!

Still, no matter how fans will perceive the series’ conclusion, we should be grateful to see Kaguya and friends’ different perspectives on romance, friends, school life, and family relationships!

It helped these 2D characters to grow; but it also helped us (the readers) view what’s the best risk-versus-rewards approach to maintain a challenging relationship (especially, one that is crumbling from the inside and cracking midway). 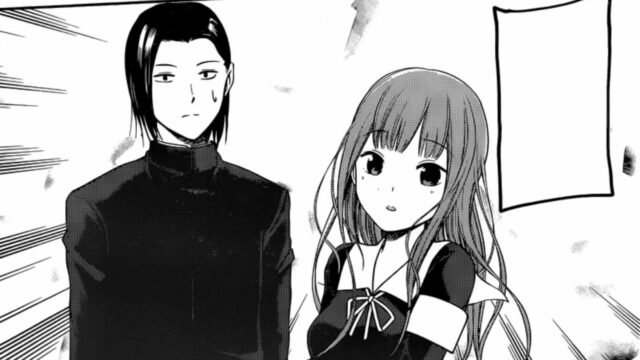