When an evil group decides to try their luck at interstellar conquests after successful world domination, all hands are on deck when the new chief operative screws their plan.

This is the story of Natsume Akatsuki’s light novel series Combatants Will Be Dispatched!

The novels published in 2017 gained huge popularity and paved way for a manga adaptation in 2018. But, that too did not suffice as the fans wanted an anime adaptation as well.

Good news for the fans, Combatants Will Be Dispatched! is finally getting an anime adaptation. The anime will premiere in April of 2021 on the Funimation Streaming Platform and a PV and Visual has also been released.

The trailer features the characters Combatant No. 6 and Alice Kisaragi and announces the April release date for the much anticipated anime.

The visual poster features Alice and Combatant No. 6 trying to prepare themselves for battle.

The staff for Combatants Will Be Dispatched! includes:

More information for the anime release will be revealed at a later date.

The novel Combatants Will Be Dispatched! tells the story of an organization led by Alice Kisaragi. She deems her organization as an evil one and hires Combatant No. 6 to go on a mission to another planet and fight the villains there.

But, all this planning does not mean a smooth ride for the team as they face various challenges along the way.

The anime’s official website is putting Volumes 1-6 of the light novels on sale. Yen Press is in-charge of the English translations for the novels.

Let’s see if the anime lives up to the thrilling story of the novel and delivers the stunning visuals like the manga adaptations.

About Combatants Will Be Dispatched!

Based on Natsume Akatsuki’s 2017 light novel series, Combatants Will Be Dispatched! tells the story of an evil organization and their quest to conquer a new planet as they embark on an interstellar adventure.

The novel’s popularity gave rise to the manga adaptation in 2018.

J.C. Staff is making the anime adaptation for the novel and it will be released in April of 2021 in Funimation anime streaming platform. 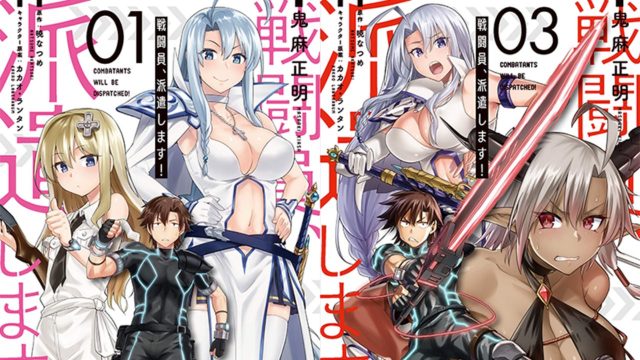 Combatants Will Be Dispatched! Novels by Konosuba’s Natsume Akatsuki Get TV Anime