Code Geass: Lelouch Of The Resurrection, released in February 2019, was the result of the celebration of the franchise’s 10th Anniversary. Featuring a continuation to the original story of the Code Geass Anime series, it was announced that this was just the beginning of a ten-year-long plan to continue working for the franchise.

With this thought in the back of the heads of the fanbase, a recent announcement by Anime NYC has left the fans wondering whether something new is about to be released. Anime NYC, in collaboration with Funimation, recently announced a special Code Geass: Lelouch Of the Resurrection screening.

Code Geass writer Ichirō Ōkouchi, character designer Takahiro Kimura, and the voice behind C.C., Yukana, will be attending the screening of Lelouch Of the Resurrection. Knowing that the film’s release was earlier this year, fans are speculating that this means a new Code Geass anime is coming out soon.

With no actual proof to support this speculation, there is a good chance that this will not come to pass. The screening is still going to be a great experience for those who attend it, as the feature film is not yet available in a home video format. One thing that does intrigue fans is the inclusion of Lelouch in every single promotional material despite the end of the original anime series. Taking place two years after the end of the original series, Code Geass: Lelouch of the Resurrection released in Japan earlier this February and Funimation brought it to North American theatres last May.

Code Geass, released in 2006, is a psychological mecha anime that begins with an exciting set of events that changes the life of Lelouch Lamperouge while giving it meaning. Code Geass is set in a Japan that is annexed by Brittania and stripped of its identity with the name “Area 11” where its people are treated as second class citizens. A young Lelouch Lamperouge is determined to exterminate this empire. Within years to come, Lelouch encounters a mysterious girl that gives him the power of the “Geass”. 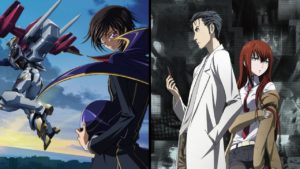 Steins Gate vs Code Geass – Which is better?