LGBTQ+ representation in anime might be rare, but it is by no means new. In fact, specific genres such as yuri (Girls Love) and yaoi (Boys Love) have gained widespread love and already developed a well-rounded fanbase.

Unfortunately, most of the series in these genres cater towards the fetishes of the opposite sex. It is difficult to find a good yuri or yaoi anime that goes beyond the sexual aspects to develop a decent story or show the struggles the characters go through.

This is especially the case for yuri, i.e., shows portraying romantic relationships between girls.

With the beginning of Pride month, let’s take a look at ten anime that can be considered the cream of the crop of the yuri genre.

Sakura Trick is a cult classic for fans of the yuri genre. It is a feel-good anime where the issues get resolved quickly and romance blooms.

The story revolves around two best friends – Yuu Sonoda and Haruka Takayama. Set in a high school, the girls deal with making friends while maintaining a close relationship with each other. One day, they share a kiss and everything changes.

Sakura Trick has beautiful animation, multi-faceted characters, and a healthy dose of action. The only area where this anime falls flat is the plot; however, the other aspects make up for it.

READ:  Most Kawaii/Cute Anime Girls Ever!

Air Date: October 9, 2020 Status: Finished Studio: Tezuka Productions No. of Seasons: 1 No. of Episodes: 12
Watch Adachi and Shimamura on:

Adachi to Shimamura holds a controversial position on this list. The anime is built on the relationship of Adachi and Shimamura – two high school students.

We follow these girls as they suddenly stumble onto each other and become close friends. The highlight of this show is Adachi and Shimura trying to figure out and define their relationship.

Now, onto why Adachi to Shimamura is controversial; there are a few reasons. First, Adachi’s obsession with Shimamura and their relationship is seen as toxic. Other than that, the over-the-top scenes fan service breaks the flow and leaves a bad taste.

Nevertheless, the series boasts beautiful animation, a melodic soundtrack, and a consistent plot that makes it worth a watch.

Strawberry Panic is a ridiculously entertaining anime with healthy doses of romance, angst, and comedy. It is a series that most yuri fans keep rewatching due to nostalgia.

The anime’s plot centers on Nagisa Aoi – a new student to a prestigious all-girls school. Her actions and adventures introduce us to Shizuma Hanazono and Tamao Suzumi as fellow main leads.

We follow their everyday routines at the school while facing the challenges of building and defining a relationship.

Strawberry Panic walks the line between being a light-hearted rom-com to a dramedy. The audience’s enjoyment of the anime will depend on how they feel about the final pairings in the last few episodes.

However, Strawberry Panic is a must-watch as one of the better shows in the yuri genre.

READ:  Top 12 Best Anime with Fanservice Ever! What Anime Has The Best Fanservice?

Yuru Yuri is a generic “moe-slice-of-life” anime where four girls try to amuse each other. Unlike the other series on this list, Yuru Yuri does not have a defined plot, development, or even a climax. However, that is precisely what is so attractive about the series.

The anime follows the daily events of Akari, Yui, Kyouko, Chinatsu – each with their distinct personalities. Their antics are hilariously entertaining to watch. With well-measured moments of seriousness, Yuru Yuri will have you smiling at the end of each episode.

Ironically, despite the “yuri” in its name, the show does not make it the centerpiece. Yet, it is regarded as one of the best yuri anime thanks to its humor, cute aesthetic, and repetitive shoujo-ai indulgence.

Sasameki Koto is a character-driven anime that beautifully portrays the pain of one-sided love.

Murasame Sumika, an intelligent and sporty girl, is in love with her classmate, Kazama Ushio. Ushio also loves girls, so what’s the problem then? As it turns out, Kazama only loves cute and weak girls who can depend on her, i.e., everything Sasameki is not.

Let this simple and overly used premise not fool you! Sasameki Koto’s advantage lies in its well-fleshed characters, through which it manages to bring in realistically satisfying romance and comedy.

The prickly feeling of an unrequited love turning into an enriching relationship is satisfying, to say the least.

Maria-sama Ga Miteru is another slice-of-life anime with a tinge of drama and romance. Like most series on this list, the story is simple. It’s about two girls in a prestigious Catholic school in Tokyo.

Maria-sama Ga Miteru follows Yumi Fukuzawa as she catches the interest of Sachiko Ogasawara – the school’s most popular student. With the latter’s offer to be Yumi’s soeur, their relationship begins.

This anime is quite serious most of the time, and the yuri elements are quite subtle. Nevertheless, the complex interpersonal dynamics between the characters and a slow but steadily brewing romance make this series a must-watch.

There’s nothing flashy about Aoi Hana. It is a serious and delicate series that follows a group of teenage girls as they learn about “Hatsukoi,” i.e., first love and themselves.

The delectability of Aoi Hana lies in its exploration of the “childhood friends to lovers” trope through Fumi and Akira. The story takes place in a high school, where both girls start as freshmen.

A series of events lead to their reunion; however, their relationship is not the same as many years ago.

A simple but touching story with beautiful animation and soundtrack places Aoi Hana fourth on this list.

Simoun takes place in Daikuriku – a war-torn world where everyone is born female. At age 17, they undergo a special ceremony where each maiden chooses her sex. This exciting premise hooks us in as the story progresses.

Simulacrum’s young maidens can synchronize with mecha-like flying machines called Simoun to defend against their enemies. The twelve girls that form the ranks of Tempus-Spatium, suddenly become the front line of Simulacrum’s fighting forces.

Simoun is about young girls growing up amid war and realizing the importance of protecting their loved ones. Everything from friendship to romantic love is explored in this series.

With a dash of sacrifice, choice, and moral questions, Simoun might be the pinnacle of storytelling.

(A piece of advice – get past the first 5-6 episodes, and you’ll find yourself unable to stop!)

Asagao to Kase-san is one of the sweetest and heartwarming yuri anime on this list.

It simply and straightforwardly follows the relationship of Yamada Yui and Kase Tomoka, who are pretty different from one another. However, as the girls’ date, they learn to become understanding of each other’s interests.

In this anime, rather than shocking betrayals and heartbreaks, you’ll get domestic scenes of the girls proudly indulging and thriving in their love for one another.

Unfortunately, due to its short nature as an OVA, there is little story until towards the end. However, there is no shortage of character development and emotions. You’ll find yourselves laughing and crying out of joy as the girls experience the exhilaration of first love.

Bloom into you is the best yuri anime of all time due to its clear sub textless nature. It unabashedly explores the love between two girls and the fear that plagues them.

Without removing the focus on their relationship, the anime does not forget to develop Yuu and Touko’s own stories and personalities.

Bloom into You follows Yuu Koito, a girl who has always been entranced with romantic shoujo manga but cannot experience romance herself, and Touko Nanami, a mature senior who has her own baggage to deal with.

Instead of fitting in together like puzzle pieces, Yuu and Nanami slowly understand what they mean to each other and attempt to further their relationship.

Without any fetishizing or unnecessary fan service, Bloom into You is a yuri anime meant for w/w and other understanding audiences. There’s no surprise why it’s so well regarded in the anime community. 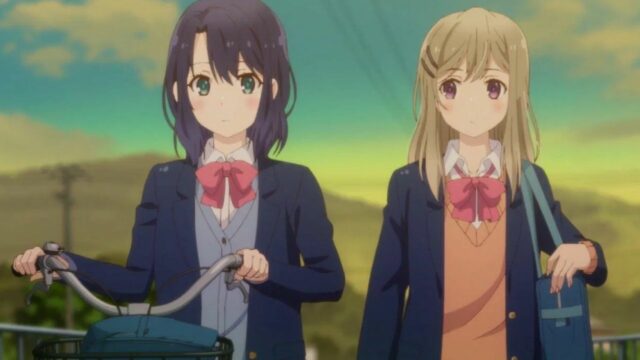