The Demon Clan existed 3,000 years prior to the start of the story. They were one of the major five races that existed in the world of the Seven Deadly Sins. They are perceived to be an evil clan that feed on the souls of other races and possess powers shrouded in darkness. The Demon Clan consists of elite warriors known as the Ten Commandments handpicked by the Demon King.

Not long ago, the Demon Clan was seen to be a clan of evil beings that were sealed by the combined efforts of the giants, fairies, goddesses and humans for waging an ancient war against them 3,000 years ago. The Demon Clan is an extremely powerful race that often clashed with the Goddess Clan -- creating an equilibrium in the country.

Many demons have a monstrous appearance and can be identified through colours, pitch-black eyes and sometimes, through markings on their face.  Demons possess multiple hearts and can only be killed once all of them are destroyed.

3. History of the Demon Clan

Upon the revival of the Demon Clan by Hendrikson, mysteries and the buried truth regarding them were unearthed. It was revealed that the Demon Clan and the Goddess Clan maintained a balance despite the animosity between them. The Goddess Clan saw killing demons as a way to protect humans. At some point, the Goddess Clan breaks the peace treaty by killing prisoners of war (including women and children).

Around the same time, the then leader of the Ten Commandments -- our protagonist  Meliodas -- ended up falling in love with the Supreme Deity’s daughter -- Goddess Elizabeth. He ends up betraying his own clan and kills two of the Ten Commandments in the process. This was seen as an opportunity by the Goddess Clan to defeat the Demon Clan once and for all. Thus, the Great War was started by instigating other clans such as the Giant, Fairy and humans against the Demon Clan.

The Demon King is the ruler of the Demon Clan and the father of Meliodas, Estarossa and Zeldris. He is known to be quite principled and regards matters related to his clan with utmost sincerity even if it borders evil. The Demon King possesses an exorbitant amount of power that usually is unmatched. Due to the chaotic nature of the Demon Realm, he distributed his power to ten warriors amongst the Demon Clan to maintain it, known as the Ten Commandments.

Zeldris is the younger brother of Meliodas and possesses the Commandment of Piety that turns a treacherous person towards the service of the Demon King, as an extension of Zeldris himself. He is also able to create a vortex that attracts living things and slices them to bits once in contact.

Estarossa is the second son of Demon King and so, the brother of Meliodas. His Commandment is Love that renders any opponent of his filled with hatred -- powerless. His ability, Full Counter is the direct opposite of what Meliods possesses, hence he is able to repel physical attacks.

Melascula represents the commandment of faith and is skilled in manipulating the dead, the dying and dimensional portals. Her Hell Gate manages to invoke demons of the lower ranks through her portals. Her commandment allows her to set ablaze the eyes of those who are faithless and standing in front of her.

Drole was the first king of the Giant Clan. He was a dear friend of Meliodas and the other warrior, Gloxinia.

Gloxinia represents the Commandment of Reposeand was initially the first King of the Fairy Clan. Gloxinia has several powers ranging from controlling life and death through nature, even reading the hearts of his opponents.

Fraudrin is the demon that has used the Holy Knight Dreyfus’ body as a vessel. He represents the Commandment of Selflessness -- those with feelings of desire and greed would end up losing their memories, feelings and sense of self in his presence. Fraudrin ends up committing suicide by giving into Meliodas’ intent to kill him.

Grayroad is a mutated Gray Demon whose gender is unknown. They represent the commandment of Pacifism. Those who kill in the presence of Grayroad have time stolen from them that causes rapid ageing. Grayroad’s body is covered with the darkness that hides numerous small gray demons that are able to speak and move freely. They are able to shapeshift and curse their opponents.

Mosnpeet represents the Commandment of Reticence. Monspreet’s main ability is called Trick Star which allows him to switch two objects with each other. His Commandment allows him to block the voices of those expressing hidden feelings or emotions.

Derieri represents the commandment of Purity and her power Star Combo allows her to increase the strengths of her shots by 200,000 pounds if released consecutively. She is usually calm but harbours hatred towards Goddess Clan.

Galand represents the Commandment of Truth that turns liars in his presence to turn into stone. Specifically, liars, that are aware of the falsity they’re spreading. He himself is not exempt from this commandment therefore if he lies or goes back on his word, he is petrified. 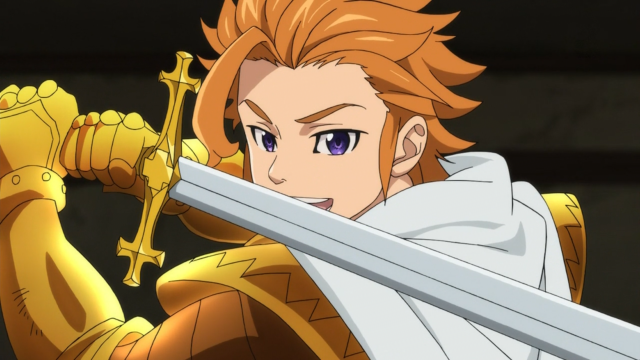