Space Force is here! Well it was here two years ago, when our beloved president launched a whole armed force to go up in space and defend the earth, or at least the American portion of it. Now, the parody of this real life joke is the one that’s arrived on Netflix.

The Greg Daniels-Steve Farrell comedy starts with an unnamed president’s tweet which asks for “b*obs on the moon”. (It’s a spelling error, the president meant “boots” on the moon). The hit duo return after nearly 15 years since their last venture together, The Office. There are definite parallels between the two, in addition to a two-word title.

While it has received mixed reviews ever since its release this week, internet is going crazy over one aspect of this dramedy. Why is one of the central characters in prison without any explanation of her crime?

Space Force is yet another workplace comedy in which colleagues with variable levels of competence get on each others’ nerves while working toward a probably pointless goal. (Sounds familiar?)

It follows the life of decorated four-star General Mark R Naird (Steve Carell) who hopes to one day run the Air Force, but is instead appointed as head of the newly-formed branch no.6 of the US Armed Forces: Space Force.

The dutiful general and a former fighter pilot, however, knows nothing about space, rockets or connecting the two. “Let’s Apollo 13 the shit out of this!” he declares.

Then there is a Mrs Naird (Lisa Kudrow, our lovely Phoebe from Friends) who is mysteriously in prison for most part of the season, and no one is telling us why! General Naird sure doesn’t when he discusses starting an open marriage considering she’s going to be jailed for anywhere between 40 to 60 years! (And, she’s already 40-something)

The very first episode begins with the relatively happy Naird family celebrating General Naird’s promotion as head of Space Force. Fast forward a year and the family’s moved to a remote military base in Colorado, but Maggie doesn’t make it there. She is already in prison.

Mrs Naird’s imprisonment remains a mystery throughout the story. This despite her being the wife of a top military officer. We only get the vaguest references to the crime she committed to earn the almost-lifer. At one point, General Mark Naird says that Maggie committed a “very serious crime.” But nobody ever says what she actually did.

Since her sentence comes just under a lifer in the US, speculations include murder or drugs. However, the imprisonment happens around the move to Colorado which could mean she tried to hinder it and didn’t want to restart her life in a new city.

While in prison, she has a whole Orange Is The New Black thing going. But even after she breaks out with her lover Louise Papaleo (Carolyn Wilson), and saved by Mr Naird, we still don’t find out what really happened.

One of the many reasons show’s co-creator Greg Daniel’s had to give for this strange mystery was “because it’s funny.”

“I think that it’s very funny to just hear little hints of it, and not know the full story… The original conception was thinking just in terms of how much pressure is put on Steve’s character. To think that in addition to taking on this incredible new challenge (heading Space Force) he also now has to deal with the fact that his wife’s in prison, and his daughter is going off the rails, and he hasn’t really parented her before.”

As for Maggie’s character, he goes on, “She was the perfect Martha Stewart-ish wife, and ended up following the Martha Stewart path even more than she thought.”

Well, we don’t find out what the mysterious illegal activity was even by the end of the season. This might be sure to mark a second season for the Netflix original.

“At the moment, we’re kind of enjoying the mystery around it and the question marks that it raises. It causes you to lean in because we’re dropping little hints about what it is and how serious it was…You didn’t miss anything. It’s not in there!”, added Daniels.

The show has some great comedy pedigree apart from Carell and Kudrow, including the condescending scientist John Malkovich, Ben Schwartz, the late Fred Willard as Naird Senior, Noah Emmerich, and Dan Bakkedahl, among others.

What is the Space Force?

The United States Space Force is a real thing, splitting off from the Air Force in 2019 as President Donald Trump wanted to “claim the stars for the stars and stripes.” 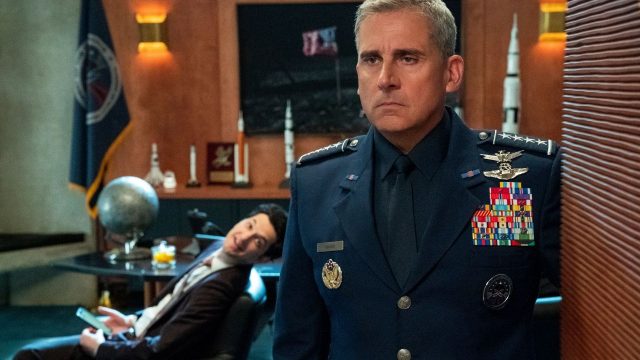