From the very beginning of Re:Zero, specifically, within the second Arc of the story, there were references to Subaru having the Witch’s scent on him.

Furthermore, he was pulled from modern-day Japan into this fantasy world with an ability that made him unable to die.

Almost all events in the series result in the usage of this ability and are connected to it in some way.

So the question is, what exactly is this ability? What makes Subaru unable to die, and why in the world does he have the Witch’s scent.

With the release of Re:Zero season two, the plot is quickly being unraveled. As we find out more about Subaru’s purpose, the questions we are wondering about since the beginning are finally getting answered.

After Subaru somehow ended up in a fantasy world and familiarized himself with Emilia, Felt, and the others, he was attacked and killed.

However, the next time he opened his eyes, the time had rewinded, and he was back at the very first place he’d arrived in this world.

From this point, no matter the circumstance, every time Subaru died, time rewinded, or looped, and he went back to the last “save” point. This ability, known as “Return by Death,” is the reason why Subaru can’t die.

2. Who Gave Him This Ability?

Satella is the Witch of envy. However, she and the Witch are separate personalities, formed when she took in incompatible Witch Factors.

She was responsible for the Great Calamity and thus was sealed off in an Evil Sealing Stone Shrine.

After four hundred years passed by, both of Satella’s personalities fell in love with a Subaru, a young man from another world.

Due to this, she used her power to transport Subaru from his world to Lugunica and gave him an ability called “Return by Death.”

Return by Death basically allows Subaru to return to a pre-established point in time every time he dies.

The point he returns to is not fixed and updates occasionally, making it similar to a save point system in a game.

3. Why Does He Have the Witch’s Scent on Him?

In the first few episodes itself, there were constantly talks about Subaru having the Witch’s scent on him.

In fact, this was the main reason for Rem and Ram’s initial animosity towards him. While no one had any idea why he had the Witch of envy, aka Satella’s scent on him, as the series progressed, it became apparent.

Despite being unaware of it before, Subaru was brought to this world by Satella, i.e., the Witch of envy, and was bestowed with a rare ability.

Additionally, he was constantly in contact with her through the ability “Return by Death.”

Subaru was always associated with the Witch and thus had her scent on him. Furthermore, every time he died or tried to tell someone about “Return by Death,” the scent grew thicker on him.

4. What Is the Curse Associated With This Ability?

Despite not being exceptionally strong as is expected of most main characters, Subaru has an ability that makes him unkillable.

With the help of “Return by Death,” given to him by Satella, he can rewind the past and return to a “save point” even after his death.

This basically means that he’s basically immortal or invincible at the least. However, having such an ability comes with its own set of rules, which, when broken, leads to penalties or curses.

The main rule is that Subaru can never reveal this ability to others.

If he does, his heart will be grasped by Satella’s Unseen Hand, which might serve either as a warning or, in some cases, death. This was seen when he tried to tell Emilia about this ability in the first few episodes.

The second curse is that anyone who he has managed to tell about it might die.

And the last one is that by attempting to reveal “Return by Death,” the density of Witch Factor increases for a short time, which will draw any Demon Beasts in the immediate area to him.

5. Why Can’t Subaru Use Magic?

Initially, excited by the prospect of magic, with Puck and Emilia’s help, he learned how to use it to a certain extent. His natural affinity was Yin magic, and accordingly, he learned Shamac from the spirit.

Subaru using Shamak in the manga and anime

However, after the events of the Sanctuary, Subaru ruptured his “gate” by casting magic and over-stressing it.

While this originally would not have been an issue, he was still recovering from the demon beast incident, which added more pressure to his gate.

Due to this, Subaru can no longer use magic on his own.

Additionally, since he cannot expel mana on his own, he is always at the risk of mana-poisoning.

Fortunately, after his permanent contract with Beatrice, the latter helps him survive by constantly absorbing the excess mana.

This contract also allows him to use magic to a certain extent by using Beatrice as a gate instead.

With Beatrice’s help, Subaru even came up with three new Yin Magic abilities that he can only use with her.

E.M.M – The first ability is E.M.M, otherwise known as “Emilia-tan is Seriously a Goddess,” allows Beatrice to use her yin magic to interfere with the time and space around Subaru.

During this time, he experiences no interference from outside the barrier.

While this ability is quite similar to the Authority of Greed, it doesn’t have the same risk and can be used multiple times.

E.M.T – E.M.T, also known as “Emilia-tan is Seriously an Angel,” is an absolute negation magic.

It forms a spherical field with Subaru and Beatrice at the center, where all mana effects are negated. One disadvantage is that this magic only negates the use of mana and has no effect against opponents who fight without it.

Rental Goa: Rental Goa is a fire spell created on the spot during Subaru’s provisional contract with la. Despite not being created with Beatrice, it worked well against Petegeuse.

To return the favor, Subaru helps her find the stolen insignia. They both get murdered by a mysterious force in the end, and Subaru wakes up with his new ability to reverse time upon his Death. 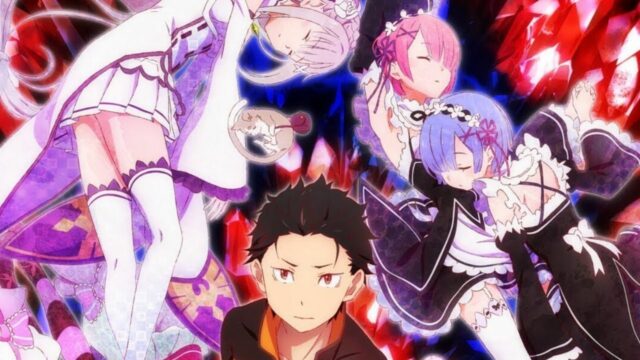