Young Yuno and Asta forged a bond over their ambitious goal of becoming the next Wizard King.

Despite the trials and tribulations, the story keeps offering, the idea of one of them becoming the Wizard King holds a symbolic meaning – their growth. The fight with the elves brought a horrible revelation to be confronted with –  after Julius, who becomes the next Wizard King?

Yuno and Asta may have jumped the ladder with their talent and hard work – but it is definitive that they’re not ready to become the Wizard King. So let’s look at the contenders for the Wizard King the story offers!

It was revealed that Julius is, in fact, alive but is not at full capacity due to resurrection. According to the story, 5 captains are Wizard King level-worthy and one of them will become the 29th Wizard King – Fuegoleon, Nozel, Yami, Mereoleona and William.

2. Who will become the next Wizard King?

The supposed death of Julius Novachrono devastated fans and characters alike. The temporary absence of the 28th Wizard King brought the age-old discussion of “Who will become the next Wizard King?” back on the table.

By the end, the arc reveals a much younger Julius emerging from the forest – where Julius claims to have saved 13 years on the cross on his forehead and has activated his time magic. Ergo, not exactly dying in the first place. But this doesn’t dismiss the relevance of discussing who would take the helm of Wizard King next.

Officially, there hasn’t been any selection, but fans have some contenders in mind. Fuegoleon, Nozel, Yami, William and Mereoleona. Most speculation bet on Fuegoleon especially after his power boost with the Salamander. But there are some open to the selection of the others too.

This need comes after the re-emergence of the First Wizard King Lemiel and his discussion with Asta. Lemiel expresses gratitude overseeing his ideals live on in Asta and Yuno. He states that he was happy to meet his descendants and have a hand in protecting the future.

These ideals come on strong as a factor in selecting the next Wizard King. It shows that it’s not just power that’s a deciding factor but also the charisma to lead, the love for the Kingdom and its people.

Yuno and Asta may be contenders but plausibly for the 30th Wizard King as their powers, and mental capacity to lead a kingdom have not reached full potential.

The sole requirement to become the Wizard King is merit – to be acknowledged as the strongest mage within the Kingdom. Now I’ll address the reasons for choosing the above mentioned as contenders.

Fuegoleon Vermillion is closest to being the 29th Wizard King. He is a perfect contender for becoming the next Wizard King. Fuegoleon’s charismatic personality easily oozes into a leadership ability fit to guide.

He has shown capable of assessing situations quickly and giving out orders as seen during the Royal Capital’s invasion.

Fuegoleon is known to be fair and pays no heed to social status when it comes to judging a person. He opts to judge people by their true worth – this is established when he defends Asta against House Silva’s oppression.

His actions are driven by justice, and he holds a no-nonsense attitude. Although as a noble, he carries enough pride to be offended by any impoliteness or condescension. He proves to be a good and just leader with Wizard Level powers.

Nozel Silva is a nobleman of the House Silva and the captain of Silver Eagle. Unlike Fuegoleon, Nozel is quite an arrogant man who considers himself superior. Ability-wise Nozel is a great contender for the Wizard King.

Still, it would be slightly jarring to see a discriminative and haughty King at the position. Despite this, Nozel does take his role and status quite seriously.

He condemns the absence of his House when Fuegoleon is injured and is genuinely respectful of his peers. Nozel’s candidacy is definitely worth mentioning.

Yami is a foreigner from Hino Country and the captain of the infamous Strongest Black Bull Members. His squad emulates his own personality: recklessness and uncouth behaviour.

He may be hot-headed and not quite disciplined, but he’s a good man at heart. He was the first to notice Asta’s merits. Despite his antics, he is a powerful and well-respected mage within the Kingdom. Even though his actions are unrefined, Yami is still a perceptive and experienced fighter.

Yami does not discriminate and helps people grow within their own sphere through his ‘tough love’. He may not be a conventional Wizard King, but he is quite a likeable one – even liked by Julius himself.

William Vangeance is the first captain of the Golden Dawn Squad. He shared a body with the leader of the Eye of the Midnight Sun, Patolli. But recently, they separated after Asta exorcised them and freed them.

He holds a close relationship of respect and admiration with Julius. William is loved and respected by his men. Vangeance is an observant and cautious man with a congenial attitude. Although his role in the elves arc might cause damage to his credibility.

Mereoleona is a noblewoman of House Vermillion and also, the current captain of the Crimson Lion – one of the top Knight Squads. In terms of power, Mereoleona is also worth considering for the title of Wizard King (or Queen in her case).

But it is doubtful that she would agree to the role as she dislikes the Royal Capital and spends most of her time in the wilderness. She’s a worthy candidate if her powers and leadership qualities are taken into question.

But she’s more deserving of becoming a fierce commander or leader than a patient Emperor.

8. Does Asta become the Wizard King? 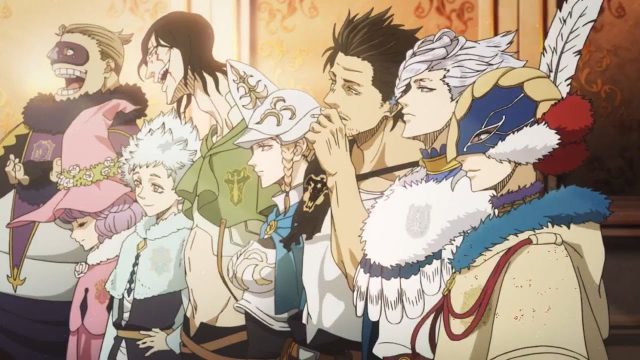