That Time I Got Reincarnated as a Slime, or TenSura for short, has eccentric characters with unfathomable power, be it in the form of demons, humans, or a slime.

While the anime enjoys massive popularity, the novel doesn’t fall short. While the webnovel has already ended, the light novel, manga, and anime are not even close to concluding. Due to this, debates about storyline changes, characterization, and power levels often occur in the fandom.

One of the most talked-about topics is the power rankings of the eight most powerful Demon Lords and who takes the cake for being the strongest. This article deals with precisely that and whether the unassuming slime makes the cut!

Tags
SPOILERS AHEAD! This page contains spoilers from the TenSura Web Novel.

Ramiris is the Fairy Queen as well as the third Demon Lord to ever exist. As one of the Eight-Star Demon Lords, she preserves the balance of the entire world and has the ability to terraform it at any point in time.

Her ultimate skill is Labyrinth Creation, which makes her undefeatable guaranteed that she has enough subordinates. However, while her power is unthinkable, there’s a limit in the form of Ramiris’ mana capacity, which doesn’t allow her to do anything impressive without the help of Veldora.

Ramiris is the weakest Demon Lord in TenSura due to her reliance on others instead of one’s personal strength. Her power is concentrated among Beretta, the Four Dragon Kings, the Dryads, The Treants, and the Elves, which she attained only due to her friendship with Rimuru.

Dino is a Fallen Angel, now holding the sixth seat of the Octagram as a Demon Lord. His ultimate skill, Sky King Luciel, transformed into Fallen King Luciel after transforming into a fallen.

After gaining the skill, Slothful King Belphegor, Dino became the possessor of two ultimate skills. Belphagor could tremendously enhance his user’s energy by storing it before, granting significant boosts of power in short spurts.

In this state, Dino can temporarily erupt with overwhelming fighting power, but unfortunately, there’s a limit to the maximum energy he can output.

Dino’s sloth ability also has the power to steal a target’s skill and make them subservient to its user. Along with destructive skills such as Fallen Catastrophe and Fallen Thanatos, Dino ranks 7th on this list.

Ruminas Valentine is a True Demon Lord that rules the Holy Empire Ruberios and all the vampires in the world of TenSura. She is a genuine Rank S Disaster-class Demon Lord and one of the eight members of the Octagram.

Ruminas governs over the aspects of life and death with the help of her ultimate skill called Lustful King Asmodeus. She can bring someone back to life from the abyss of death, as well as reverse the life and death of a target, thus instantly killing them off.

Ruminas was already capable of defeating Hinata Sakaguchi and nullifying her Usurper in the past, let alone now. With added abilities of power nullification, soul manipulation, and resurrection magic, she even managed to divide the Vampire “Valentin” into separate individuals with separate consciousnesses.

Her ability has drawbacks but is still considered one of the more powerful ones among the Demon Lords, granting Ruminas Valentine the 6th position on this list.

Leon Cromwell came from another world as a hero and later proclaimed himself to be a Demon Lord.

Due to trampling on the Octagram’s pride by assuming that title, Kazaream, a Demon Lord, went to slay Leon but failed miserably. By doing this, the latter proved himself and officially became recognized as a Demon Lord.

Leon’s ultimate skill is Purity King Metatron that allows him to draw the purest energy possible from power, magic, aura, and skill. With a light attribute, it specializes in purifying demons; ironic considering his title. He can also create sealing barriers that can suck the magic power from a target and reinforce itself.

Furthermore, as a demigod, Leon has no physical body, thus granting him eternal youth as long as the core inside his soul remains intact. This immortality, along with his ability to disintegrate atoms, grants him the fifth place on this list.

Also known as “Continent’s Wrath,” Dagrule is one of the Eight Star Demon Lords. He was the protector of Heaven’s Gates and later became a part of the second generation of demon lords.

Due to the holy power in his body, he rejected the Demon Lord Seed; however, as the demon lords started to eliminate the giants and the fairies, he awakened as a True Demon Lord.

As a Giant whose power increased due to anger, Dagrule is not someone one should provoke. His insane strength, accompanied by his true form, makes him extremely powerful. With concealing and destructive skills, he is the fourth-strongest Demon Lord, and the only reason Dagrule isn’t ranked higher is his lack of an ultimate skill.

Milim Nava is revealed to be the strongest demon lord in the anime. Among the abundant Demon Lords, Milim, one of the oldest and strongest, holds the second seat in the Octogram. Her recognition is legitimized with the title of ‘True Demon Lord.’

Milim has a continuous supply of Magicules, owing to her biological inheritance as the daughter of the Creator of the World — Veldanava, who is popularly known as the ‘Star King Dragon.’ Not only does she have the ability to handle infinite amounts of Magicules, but she can also manipulate the densest form of energy — Stardust!

This overflowing energy and her tendency to cause chaos has placed Milim to be known as the epitome of destruction. Once she went on a rampage and was only stopped after being pacified by Ramiris and fighting Guy Crimson for seven continuous days.

Guy Crimson is the “Lord of Darkness” and one of the oldest demon lords. He is considered one of the most powerful beings in the world and was even considered the strongest Demon Lord before the rise of Rimuru in the webnovel.

After being summoned to the world by a human as an Arch Demon, he ended up destroying two human nations, earning him his name and the title of a True Demon Lord. Just after awakening, Guy fought Milim, who had also become a True Demon Lord, for several days until Rimiru arrived to calm her down.

Guy Crimson’s fighting prowess allowed him to utterly defeat Leon Cromwell in the past, overwhelm the True Dragon, Velzado, and stalemate a berserk Milim Nava. One year after the battle between Rimuru and Yuuki Kagurazaka, Rimuru considered Guy powerful enough to fight Yuuki on even terms.

Furthermore, with his ability to copy skills, he was the only one that could fight Rimiru by the end of the series.

Rimiru Tempest is the strongest Demon Lord in TenSura Light Novel after gradually dethroning Milim Nava and Guy Crimson. Despite starting as a mere human in a different world to a negligible slime in this world, he ended up becoming a force to be reckoned with.

Once Rimuru evolved into a demon slime and became a True Demon Lord, his powers were enhanced, and that’s not all. After engulfing and analyzing the powers of his best friend Veldora in his fight against Velgrynd, he acquired the powers of a dragon and even reached Godhood by the end.

READ:  When and How Does Rimuru Become A Demon Lord?

With a new title, Chaos Creator, he is easily levels above any character in TenSura, let alone the True Demon Lords. It suffices to say that he’s already the most powerful being in the Slimeverse. 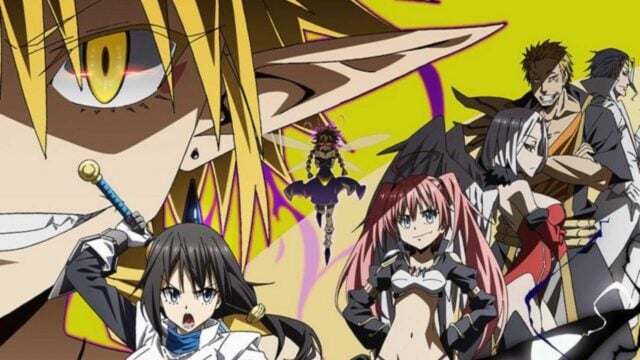