Naruto is one of the most well-known and popular series both in Japan as well as internationally.

One of the reasons behind this is its extensive world that was slowly built over the years. Since its run ended, it has influenced and become the blueprint for many shonen series.

With an epic first episode that hooked us with its opening scene, we were introduced to the nine-tailed fox, which turned out to be the very reason the whole series started and spiraled.

While portrayed as a monster full of hatred, in typical Naruto style, our protagonist managed to pacify and befriend Kurama. In fact, not only him but all of the tailed beasts.

Just like Naruto, there were other people who managed to gain the approval of the beast within them and accessed their power.

However, the question is, why were these people not as strong as Naruto if they had access to the same power?

Other than the obvious answer that they were not the main character, the reason lies behind the chakra and strength that differs among each tailed beast.

In this list below, I will rank all of the tailed beasts according to their strength.

The one-tailed beast, Shukaku, was last sealed within Gaara of Sunagakure. Other than Kurama and Gyuki, we have seen him most.

His first appearance in Naruto was during the Chunin exam, and from then on, his strength has always shocked the audience.

Like other tailed beasts, Shukaku possesses enormous chakra, which he can use to perform the signature Tailed Beast Ball.

He can also use wind, earth, and magnetic release, with a specialty in sand manipulation. Other than that, he is blessed with excellent physical strength that can obliterate even a senjutsu-enhanced Susanoo.

In the fourth shinobi war, Shukaku and Gaara joined hands to restrain Madara’s movements and actually succeeded, albeit for a short while. Furthermore, he also played an essential part in Kaguya Otsutsuki and Urashiki (temporary) being sealed.

However, as Kurama has noted, Shukaku is the weakest of the tailed beasts despite all his feats. Due to the number of tails determining the beasts’ power, the one-tailed beast rests at 10th place.

Matatabi, also known as the Two-Tails, was last sealed within Yugito Nii of Kumogakure.

Like Gaara, Yugito was captured by two Akatsuki members who proceeded to extract Matatabi. After being released during the war, Two-Tails helped the shinobi alliance to defend against Madara and Kaguya.

Talking about strength, Matatabi also has vast chakra quantities that can transfer to others and create the Tailed Beast Ball.

It can use fire release and is completely engulfed in black and cobalt blue flames. Despite its large size, it has excellent speed, and in terms of raw power, it is twice stronger than Shukaku.

Last sealed within Yagura Karatachi of Kirigakure, Isobu is more commonly known as the Three-Tails. It primarily resembles a giant turtle with a pair of human-like arms and hands but no hind-legs.

Isobu’s power was clearly seen in the anime when Orochimaru, Kabuto, and Guren’s team were not even a match for the tailed beast.

Let alone them, even Konohagakure’s Four-Corner Sealing Barrier could not manage to seal him. It was only after two Akatsuki members – Deidara and Tobi – arrived that the Isobu lost.

Talking about raw power, as a tailed beast, Isobu possesses enormous chakra and can create the Tailed Beast Ball.

Due to his aquatic nature, he has an affinity for water release and can create corals and swim at very high speeds. He can also produce a hallucinogenic mist that exploits the victim’s insecurities.

The Three-Tails physical power is terrifying as it can create shockwaves to repel attacks and even produce large tidal waves. While it has almost no weak parts, It’s tough skin and shell grant it additional defense.

Isobu, the three-tailed beast, is ranked eighth on this list since its power exceeds that of Matatabi and Shukaku, thanks to its additional tails.

Son Goku is the Four-Tailed beast, which takes on the appearance of a red-furred monkey. It was last sealed within Roshi of Iwagakure.

Other than the vast quantities of chakra and the ability to create a Tailed Beast Ball common to all tailed beasts, Son Goku is exceptionally knowledgeable in taijutsu.

Despite its gigantic size, it is very agile and utilizes its great physical strength to produce powerful, well-timed kicks.

In the series, Son Goku was captured by Kisame, an Akatsuki member, and sealed. However, during the Fourth Shinobi World War, we saw its true strength.

Despite being under Tobi’s control, Son Goku was strong enough to attack Killer B and Gyuki and even push the latter back. Later on, we saw him clash and successfully swallow Naruto.

Son Goku is placed 7th on this list based on his strength and feats in the series.

READ:  Do Naruto and Hinata Die in Boruto?

Last sealed within Han from Iwagakure, Kokuo, otherwise known as the Five-Tails, is one of the tailed beasts, and like other beasts, it possesses great amounts of chakra and can create a Tailed Beast Ball.

However, what separates it from others is its unyielding will, which was seen when it regained its senses and broke free from Tobi’s control during the war.

Despite its limited strength, Kokuo managed to ram into the Eight-Tails and push it back with its horns.

Saiken, one of the tailed beasts, takes on the form of an enormous white bipedal slug and has six long tails. It was last sealed within Utakata of Kirigakure.

As a tailed beast, it has a massive chakra and can use it to create a Tailed Beast Ball.

An ability unique to Saiken is its ability to emit corrosive substances that can instantly disintegrate its target on contact.

It also has tremendous durability, seen when it was able to withstand being thrown a great distance by Kurama.

In the anime, Saiken confronted Nago’s six paths of pain and put up an intense fight despite being defeated in the end.

Under Tobi’s control later in the war, it showed considerable power and managed to stop Naruto and Kurama’s movements for a while.

While it is extremely powerful compared to the previously ranked beasts, Saiken is still weaker than the beasts with more tails. Due to this, it is ranked 5th on this list.

What separates it from others is that six of its seven tails take the form of wings, all growing from the end of its abdomen. It was last sealed within Fu from Takigakure.

Chomei possesses substantial amounts of chakra, can use the Tailed Beast Ball, as well as fly.

It also utilizes insect-based attacks, such as biting or ramming its horn into the enemy or creating a Cocoon to slow down Chakra Absorption. It is ranked 4th on this list.

Gyuki, also known as the Eight-Tails, takes the form of a squid or an octopus and is the third strongest tailed beast. It was last sealed within Killer B.

We first saw its complete form when Sasuke and his team confronted Gyuki with the intention to capture him. As it turns out, the Eight-Tails quickly overpowered and outsmarted his opponents and managed to survive.

In terms of power, like other tailed beasts, it possesses a massive supply of chakra and can perform the Tailed Beast Ball.

This ability is strong enough to penetrate nine barriers and even push the Ten-Tails’ own Tailed Beast Ball back into its body. One feature unique to it is that if its tentacles are severed, they can be used as a medium for its chakra.

Thanks to its tentacle-like tails, Gyuki can create an enormous tornado or use it for protection.

It is durable enough to block Amaterasu head-on and can even restrain Kurama for a while. It is so powerful that even the Third Raikage had to form a special team to subdue and seal it.

During the Fourth Shinobi World War, Eight-Tails held its own against two other tailed beasts despite suffering a grievous injury. Due to this, Gyuki is ranked third on this list, with only Kurama and the Ten-Tails capable of overpowering it.

Kurama is the strongest of the nine tailed beasts. It was last sealed within Naruto Uzumaki of Konohagakure, i.e., the protagonist of the series.

READ:  Is Boruto a Jinchuriki? Will he Get The Nine-Tails?

Most of Naruto’s power has been supplied by Kurama, and the latter can be said to be a significant source of strength. It was as a team that they managed to defeat Kaguya, a celestial goddess.

Kurama’s massive chakra reserves were enough to be passed on to the entire Allied Shinobi Forces and be felt countries away by non-sensors.

It could also create a Tailed Beast Ball, powerful enough to counter an attack from the Ten-Tailed Beast.

Kurama can raise tsunamis and flatten mountains with just a single swipe of a tail.

Even with half its strength, it could overpower five other tailed beasts, destroy Madara’s senjutsu-enhanced Susanoo, and battle Sasuke’s Tailed Beast-enhanced Complete Body – Susanoo.

Kurama is several times stronger than other tailed beasts and ranks in the second position, just below the Ten-Tailed Beast.

READ:  Who is stronger between Susanoo and Kurama?

The ten-Tailed beast is regarded as the progenitor of chakra and is the combined form of Kaguya Otsutsuki and the God Tree. To end the beast’s rampage, Hagoromo Otsutsuki became the Ten-Tails’ jinchuriki and later split its chakra into the nine-tailed beasts.

If the chakra reserves of the nine tailed beasts were considered enormous, imagine how great their combined chakra would be?

With overwhelmingly powerful reserves, the Ten-Tails is considered the source of all chakra and can bring total despair and destruction to the world.

The Ten-Tailed beast is the strongest tailed-beast. It is so powerful that even Kurama admitted that alone, it wouldn’t stand a chance.

When it assumes its final form, the Ten-Tails becomes a God tree capable of capturing and absorbing the tailed beasts and humans.

It simply overwhelms the other beasts through sheer power alone. In conclusion, it can be said that the Ten-Tails has all the abilities the others have, plus more. 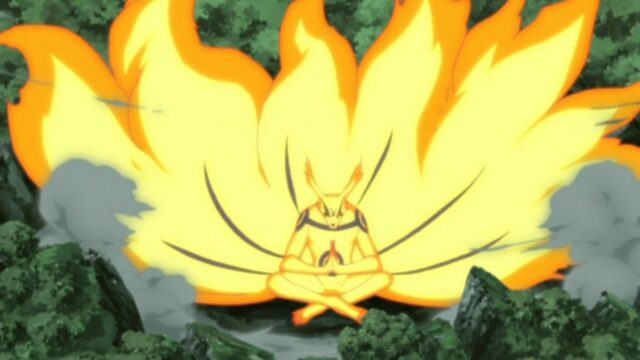 Is Boruto a Jinchuriki? Will he Get The Nine-Tails?