Midoriya is focusing on improving his strength and becoming a better Hero. He has no interest in pursuing romance currently, but that does not mean that he doesn’t have romantic feelings for anyone.

He has been shown to have difficulty talking to girls at times, even though he gets used to them after a while. His nervousness and random blushes might be an indicator that he likes someone. The question is who.

Contents
1. Who is Midoriya dating?
2. Does Midoriya like Uraraka?
3. Who does Midoriya like?
I. Mei Hatsume
II. Melissa Shield
III. Himiko Toga
IV. Mina Ashido
4. Are Midoriya and Uraraka together? Will he marry her?
5. About My Hero Academia

1. Who is Midoriya dating?

Midoriya is not dating anyone currently. He is presently focused on improving his overall control over his Quirk – One for All. Due to this, he does not have time to spend on romance.

However, that does not mean that he does not have romantic feelings for anyone, especially considering all of the Hero class stays together. There have been indications of him liking Uraraka, however, it is all speculation so far.

Uraraka is the first person and girl that Izuku interacted with when he first came to U.A. High School. The two meet again after becoming classmates and soon become close friends; they get along very well, and their discussions are always bright and friendly.

A running gag is Izuku blushing and getting flustered whenever Ochaco happens to be too close to him, hinting that he might have a crush on her.

Ochaco is the one that turns his once demeaning nickname ‘Deku‘ into a positive identity for him, when she says it gives her a ‘never gives up‘ vibe. This new identity means a lot to Midoriya, and he even makes it his hero name. They share similar ways of quick thinking, which contributes to their friendship.

Ochaco is inspired by him, striving for his level of tenacity and perseverance. Izuku thinks of her as a brave and resourceful person by herself and considers her a person very capable of devising strategic plans on her own.

For example, he is anxious about how wounded and hurt she was after losing control of Blackwhip, and later protected her from Hitoshi Shinso’s Cloth before she could react. After the battle, Mina teases both Izuku and Ochaco, which causes them to blush furiously in embarrassment.

It is highly possible that Midoriya likes her.

Midoriya does like Uraraka, most likely as a friend. Even if he does have romantic feelings for her, they are unlikely to start dating anytime soon. Midoriya is focused on becoming a hero and he seems more focused on that goal and less about dating.

However, he will date, and like someone sooner or later.

Let us see his relationships with possible candidates other than Uraraka.

Mei and Izuku first meet during the Sports Festival. Mei takes an immediate interest in Izuku when he gets first place in the Obstacle Race and, as a result, got the ten million point headband for the Cavalry Battle.

She sees this as an opportunity to bring attention to her inventions by using Izuku and approaches him before the battle, asking to join his team. In return for her joining, she offers him and his other teammates support equipment to aid their battle.

Her tendency to get in his personal space creeps Izuku out, though they still get along well because of their shared admiration for heroes.

Overall, the two generally get along well as Izuku has no problem talking with Mei during their first encounter. They became acquainted with a jetpack Mei creates, which is similar to a hero Izuku is familiar with, Air Jet.

Izuku seems to tolerate Mei better than some of his classmates, like Tenya and Ochaco. He shares some similarities with her as he creates ways to counter the Quirks of others and rambles endlessly while she does the same with gadgets.

She has gotten used to him, as she now remembers his last name, in contrast to her old mistake. Izuku is still friendly with her even though he is put off by her habit of getting in his personal space.

There is no relationship other than friendship – even that is far fetched – between them.

Despite the short time they’ve known each other, Izuku and Melissa have become well-acquainted with each other. During their initial meeting, Izuku was flustered by Melissa and how close she was to his body when examining his scars and hero costume.

Once Melissa took him on a tour around I-Expo, Izuku quickly bonded with her over their similar interests in heroes and support tech. Izuku even preferred Melissa to call him by his hero name instead of his first or last name.

The two also share a goal in wanting to save people. Melissa shared her past of being Quirkless, as Izuku related to her since they both overcame it in their way.

During the events of the I-Island Incident, Izuku and Melissa showed great teamwork and cooperation in stopping Wolfram and regaining control of I-Island Central Tower.

Izuku comes to see her as a good friend and develops a protective side to her as he defends her from any attacks made by Wolfram or his henchmen.

The chances of Midoriya liking Melissa in a romantic way are few. He probably sees her as a dear friend.

Himiko first encounters Izuku when the Vanguard Action Squad attacks Classes 1-A and 1-B’s field training. Himiko jumps him and briefly introduces herself before she is pushed away by Mezo Shoji.

During Eri’s rescue operation, he ran across her yet again when a disguised Himiko lovingly tried to cut him with her knife. Her Quirk was deactivated by Aizawa, and her identity was revealed, giving Izuku a shock as he was saved by his teacher.

Putting two and two together, Izuku figured out that Himiko was the same girl he had sparred with during the license exam.

While many fans of the series are ardent fans of Midoriya and Toga and hope to see them together, in nearly all their encounters, Izuku is downright terrified of Himiko’s maniacal obsession with him and her deranged personality.

Mina and Izuku respect each other from what one can gather, though they rarely share screen time. Mina has a playful bounce off of Izuku’s muttering, though she doesn’t seem to mind it, unlike most characters.

Their relationship improves during the weeks leading up to the School Festival. When interested in Mina’s dance skills, Izuku asks her to teach him some dance movements, a job that Mina happily accepts. She and Izuku are shown to have a great time despite the latter’s bad dancing.

During his fight with Gentle Criminal, he uses Ashido’s dancing moves to out-maneuver him. He also mentally thanks her for his victory.

After their team wins the fifth round in the Joint Training Battle, Mina teases both him and Ochaco for the latter grabbing onto Izuku so hard in her attempt to save him, which causes both Ochaco and Izuku to turn bright red in embarrassment.

There is no chance of a romantic relationship between them as Mina herself supports him and Ochaco and hopes for them to be together. It seems like there is only friendship between them.

4. Are Midoriya and Uraraka together? Will he marry her?

Midoriya does like Uraraka, most likely as a friend. Even if he does have romantic feelings for her, it is probably that they will not get together anytime soon. My reasoning for this thought is that Midoriya is focused on becoming a hero. He seems more focused on his own goals and less about dating.

However, he will date, and like someone sooner or later. When this time comes, there is a high probability that Midoriya and Uraraka will end up together and get married if it lasts. 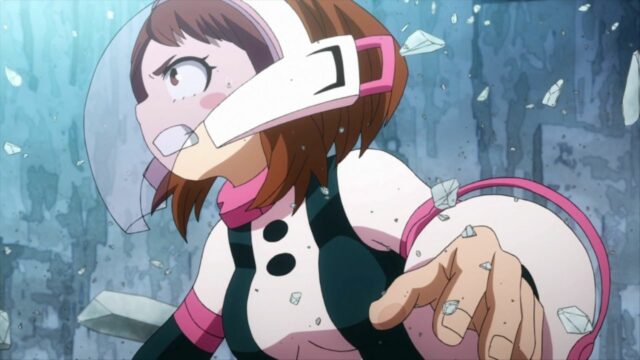 Can Uraraka’s Quirk Evolve? Can She Make Things Heavier Or Make Water Float?