Quirks in My Hero Academia began as a mutation that shocked the world and seeped into the biological make-up of humans. Currently, it exists within 80% of the population, making non-powered individuals estranged from what is considered “normal.”

Quirks exist in variations and usually manifest at the age of four. The possession of Quirks has become a huge determinant of people’s future, with characters becoming Villains or Pro-Heroes that determine society’s condition.

Here are some of the strongest Quirks existing within My Hero Academia’s world.

The tenth position is a tie between two Quirks — Manifest and Creation. The quirk Manifest is possessed by Tamaki Amajiki.

The quirk Creation is used by Momo Yaoyorozu. It allows her to materialize objects from any part of her body. She uses it to replicate tools and weapons, of which she has a basic understanding of its atomic configuration.

The second last position is a tie between Hellflame and Cremation. Hellflame is a quirk used by Enji Todoroki, which gives him pyrokinetic abilities. This is an extremely powerful quirk that helps him incinerate his opponents or surroundings.

The only drawback is that if overused, it can increase his body temperature to dangerous levels. Similar to Hellflame is Cremation, which is an unnamed quirk used by Dabi.

The flames are extremely hot, which is signified by its blue color. The user can ignite the fire on any part of his body and use it to combust anything.

Blackhole is the quirk possessed by Thirteen, which allows her to create a suction similar to black holes with her fingers. These black holes can suck in and disintegrate any matter at a subatomic level – even light.

Given its nature, the quirk is highly volatile and poses a danger to any living nearby or can cause large collateral damage to structures.

Even the user is at risk of falling prey to the Blackhole effects and, therefore, must be cautious while activating it. Thirteen is not properly equipped to handle this Quirk, so she avoids using it for offensive attacks.

The quirk is perfectly divided, which allows the user to use both powerful elements quite easily and simultaneously if required. Shoto Todoroki indulged in intense training to regulate the temperatures of both elements for better control.

One of the drawbacks is the constant alternating between heating himself and cooling himself, which can lead to overusing. This can, in turn, lead to frostbites, overheating, or fatal consequences.

Brainwashing is the quirk used by Hitoshi Shinso. It is quite a dangerous and powerful quirk that allows the user to control anyone who responds to his statements.

The quirk is activated voluntarily and can be used on more than one target, provided Hitoshi concentrates on them. Those who are brainwashed must follow every command of Hitoshi’s and are trapped in their own body with no control.

The quirk has a few limitations. Hitoshi can only command simple activities that don’t require critical brain activity, and even a physical jolt to the target can break the effect.

Overhaul is the quirk possessed by Kai Chisaki. It gives the user the ability to deconstruct and reconstruct matter via the touch of his hands.

The quirk applies to live and non-living entities. The user has control over the extent and range of deconstruction and reassembling. The whole process takes place quite quickly. It is seen that Kai can combine the components of two different things to create something new.

Decay is a rare quirk possessed by Tomura Shigaraki. It gives Shigaraki the ability to destroy anything to dust through the touch of his hands or feet. Decay works on both living and inanimate things.

The quirk can create a chain of disintegration by going beyond what the user has touched. It can be countered with quirks that require manipulation of liquids or particles.

READ:  Shigaraki Inherits All for One’s Quirk in the Latest Chapter of MHA

One for All is a transferable quirk that is currently possessed by its ninth inheritor, Izuku Midoriya. This quirk has a futuristic vision as it allows its users to stockpile enormous amounts of power to enhance their physical abilities.

These reserves of power can be accessed by its future inheritors, which gives them superhuman levels of speed, strength, agility, and durability.

The user can spread the power across their body or concentrate it on one body part. This quirk requires intense training for its maintenance as the amount of power is enough to destroy one’s body.

All for One is a quirk used by a mysterious villain known in the underworld by his quirk’s name. The quirk allows its user to steal other quirks rendering those people quirkless.

It can take away quirks and also transfer them to someone else. It is hinted that the quirk, in itself, is transferable. The amalgamation of different quirks altogether can create disastrous effects.

It is seen that the recipients of the quirk are unable to handle the strain of this quirk. The effectiveness of the quirks obtained depends on the user’s abilities.

Rewind is a quirk possessed by Eri that manifested through an extremely rare mutation. This quirk allows Eri to reverse a person’s body back to its previous state in time.

Upon activation, those in contact with Eri or come under a certain radius of distance are affected by her quirk. This helps Eri reverse any body modifications or injuries.

But the rate of reversal can go beyond that reverting people to a state where they didn’t exist. The quirk is even able to rewind genetics. This quirk applies to living beings and can be countered with the Erasure Quirk. 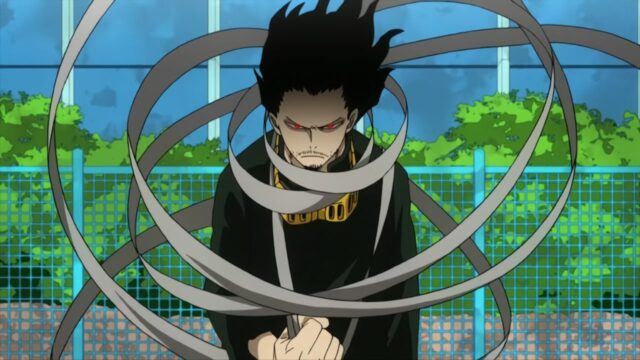