Series like ‘Reborn as a Vending Machine, I Now Wander the Dungeon’ make you realize just how limitless the isekai genre is. Slimes and OP skills are a thing of the past, and being reborn as an object is the new hot thing.

The protagonist loves vending machines and dies protecting one. Still, liking vending machines is one thing, and being reborn as one is another. I am curious to see what powers the main character will receive despite being transformed into a non-living thing.

‘Reborn as a Vending Machine, I Now Wander the Dungeon’, the light novel series by Hirokuma, will receive an anime adaptation. Whether the adaptation will be a movie, series, or short anime is not yet revealed.

The latest teaser gives a weirdly accurate introduction to the series:

An isekai world is introduced at the beginning of the video. This world has traditionally received isekaid heroes who save them from different kinds of evils. So who’s the next savior? You guessed it right, it’s a vending machine.

The hero himself is surprised by this development which sets the comic tone for the anime. No matter how you see it, it’s impossible for a dispenser to move, much less win a fight, unless you are talking about throwing cans at each other.

How will the hero survive in a monster-infested dungeon with no powers except dispensing drinks? I’m yet to find the answer, but I’m sure the new adaptation will satisfy all my queries.

About Reborn as a Vending Machine, I Now Wander the Dungeon

Reborn as a Vending Machine, I Now Wander the Dungeon is a Japanese light novel series written by Hirukuma and illustrated by Ituwa Kato. It was acquired in 2016 and published by Kadokawa Shoten.

The story follows its titular protagonist who, after being crushed to death by a vending machine, is reincarnated as a sentient vending machine in a fantasy dungeon world.

Shortly after, he meets and befriends Lammis who names him “Boxxo” and starts carrying him around on her back, and the two start their adventures in the dungeon together. 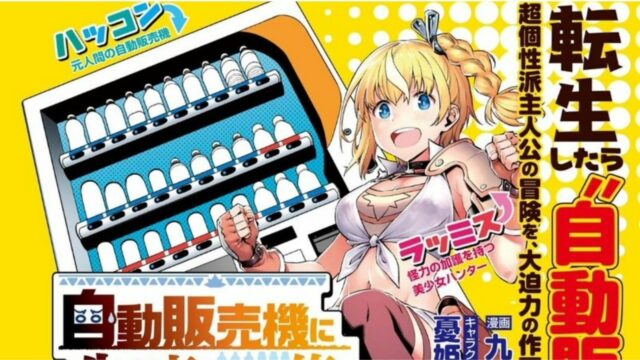