Boruto: Naruto Next Generations manga has started to finally establish itself and capture fans’ interest, starting from the Kawaki and Kara arcs with its brand new antagonist — Jigen, the leader of the Kara organization.

Just like what Akatsuki was to Naruto, Kara is to Boruto, and undoubtedly, Jigen plays an essential role in the latter.

As its head, he is in charge of the many atrocities committed by the organization, including but not limited to human experimentations. In addition, with a connection to Otsutsuki, Jigen is almost undefeatable.

As the series progresses, we have found a lot more about the source of Jigen’s power and whether he is as capable as he shows himself to be. Without further ado, let’s unmask Jigen and find out his true identity!

Contents
1. Who Is Jigen? – Monk Turned Villain
2. Cruel Treatment of Kawaki
3. Jigen’s True Strength
I. Jigen vs. NaruSasu
II. Jigen vs. Kaguya
4. Alive or Dead?
5. Nourishment for the Divine Tree
6. About Boruto

1. Who Is Jigen? – Monk Turned Villain

Jigen is the leader of Kara and a major antagonist in Boruto: Naruto Next Generations. Before becoming a vessel for Isshiki Otsutsuki, Jigen was actually a monk (talk about a 180° change).

However, compared to other characters who turned villainous, such as Madara, Obito, or even Sasuke, he is truly pitiful.

There was no such traumatic event in Jigen’s life that made him change, and it was merely a matter of coming across the wrong person. After Kaguya Otsutsuki betrayed Isshiki and left him for dead, he attacked Jigen, during which he shrunk himself and entered the latter’s ear to survive.

From then on, Isshiki started absorbing nutrients from within Jigen’s body and started deceiving him with lies.

Due to this, the former eventually embedded his Karma in him, which marked Jigen’s fall from a monk to a pitiable villain who wasn’t even in control of his own thoughts.

READ:  Boruto Chapter 46 Reveals Jigen’s Identity, There Is No Jigen!

Isshiki took over Jigen, but the latter’s body did not prove to be capable enough. As an Otsutsuki, his strength was tremendous, and no ordinary vessel would suffice. Due to this, Isshiki did not revive in Jigen’s body but instead set his eyes on Kawaki.

The task to get Kawaki ready fell on Jigen, and it’s safe to say that he did not do his job very well.

While he saved the boy from his abusive father, the Kara leader put him through torturous training and experiments.

After doing all of this, Jigen still had the audacity to act as Kawaki’s adoptive father. Thankfully, it was not too late, and Naruto showed him what fatherly love and care was like.

As Kara’s leader, Jigen’s body is modified with Scientific Ninja Tools, making him a literal monster in terms of power and ability.

Furthermore, he has complete mastery over melee-combatant, both with weapons and hand-to-hand combat, and does not depend solely on his chakra reserves.

Due to Isshiki’s presence in his body and the Karma seal, he can create black rods capable of absorbing chakra from its targets; even Naruto fell victim to this ability.

Even without accessing his full power, Jigen could still fight and hold his own against Naruto and Sasuke, despite not defeating them, which speaks a lot about his strength.

When accessing the full power of Karma, Jigen gained a tremendous boost in power.

His speed further increased, making him capable of easily dodging Sasuke’s sword slash in Complete Susanoo form. He also literally punched Naruto out of his Tailed Beast Mode and caused him to revert to his base form.

While this overpowered form of Jigen did not last long, and he had to recuperate for two days to gain his strength back, it is without a doubt that he is one of the strongest characters in Boruto.

While Jigen did overpower both Naruto and Sasuke at one point, he is not as overpowered as one thinks. The only reason why he could defeat them was that he had Isshiki’s Karma seal, which provided him a massive power boost.

Since Jigen cannot maintain this state for a long time and once all his cards are drawn and exhausted, he is left with nothing.

Furthermore, after seeing him power-up, Kawaki commented that Naruto is undoubtedly stronger than Jigen, and since Sasuke is similarly powerful, Jigen is weaker than them both.

Furthermore, she also fought both her sons for weeks on end until she was finally sealed. While she was defeated in the end, it took great effort on her opponents’ part and even resulted in the death of many.

While it may be a different matter if we compare Isshiki and Kaguya, Jigen by himself is not stronger than her. Without Otsutsuki’s strength, Jigen loses any ability to fight, let alone defeat her.

READ:  Who is the strongest Otsutsuki in Naruto Shippuden & Boruto?

Jigen is dead in Boruto after facing Kenshin head-on. After the last battle against Naruto and Sasuke, Jigen was severely drained.

Due to that, he could not shrink all the eternally burning fire that Kenshin summoned and burned to death alongside Isshiki.

However, as Jigen had the Karma mark, Isshiki revived into his body despite the former being biologically dead.

5. Nourishment for the Divine Tree

The Otsutsuki have one goal – grow stronger. In order to do so, they roam the universe and plant Divine Trees that suck the energy of a plant and sprout Chakra Fruits, thus directly increasing their strength.

Isshiki and Kaguya came to Earth for that very reason; however, they failed once.

Determined to succeed this time, Isshiki needs to fulfill an essential requirement.

For the Divine Tree to grow, an Otsutsuki member is required to be eaten by the Ten-Tails. Originally, Kaguya was meant to be the sacrifice, but due to her betrayal, Isshiki changed plans.

The Otsutsuki plotted to feed Jigen, along with himself, to the Ten-Tails. Since Kawaki had his Karma mark, isshiki could revive once again.

However, since he had not yet recovered, the resultant Chakra Fruit would be of lower quality. After Boruto came into the picture, Isshiki abandoned Jigen and decided to feed the young Uzumaki to the Ten-Tails. 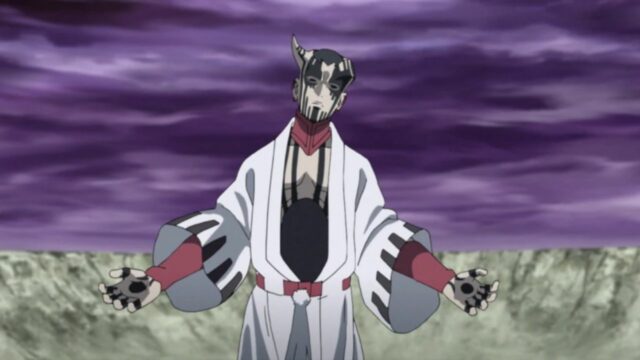