Okay, so unless you’ve been living under a rock, you’ve heard of the theory that the newest Admiral of the Marines, Ryokugyu, aka, the Green Bull, is Shimotsuki Ushimaru.

There are some fans buying into this theory for the sole reason that it is exciting (with the prospect of Ushimaru’s connection to Zoro); there are some that straight up reject it.

If you search, you can locate evidence that confirms as well as refutes the theory, but let’s dig into why this proposition is so popular in the first place – and what makes it so credible.

In Chapter 953, Shimotsuki Ushimaru was confirmed to have been killed by Kaido in Wano, but he still might be alive.

He could have escaped via the port of Hakumai and joined the Marines to gain enough power to take back Wano from the Beast Pirates.

In Chapter 1024, it was revealed that Ushimaru was a member of the Shimotsuki Family, a direct descendant of the samurai legend, Shimotsuki Ryuma.

He was the last daimyo of Ringo in Wano until Oden’s death and Orochi’s takeover as shogun. Kaido captures the samurai and imprisons them in the same cave Yamato is in.

Ushimaru frees Yamato from Kaido’s literal chains, and goes to fight Kaido with the other samurai, but is reportedly killed.

The thing is, Onimaru was once confirmed to be dead too, that to on a Vivre card. Similarly, Sabo, the chief of staff of the Revolutionary Army, was also confirmed dead, but he is very much still alive.

What with the parallels between Ushimaru and Admiral Ryokugyu, it is very hard not to believe in the narrative that Shimotsuki Ushimaru has returned.

It is likely that Shimotsuki Ushimaru and Admiral Green Bull/Ryogukyu are the same person. There are several factors that link Ushimaru to Ryokugyu.

First of all, Ushimaru is Japanese/kanji for “bull.” Next, In Chapter 962, Ushimaru’s kimono had bulls on them.

I know the bulls were colored green only in the anime, but this doesn’t take away from the fact that they were bulls in the first place. In the flashback episode, Ushimaru tells Yamato that samurai never get hungry.

This directly ties back to the revelation that Ryogukyu went without eating for 3 whole years.

If you read the One Piece manga, you already know that there are no such things as coincidences – and the symbolism here is too strong to ignore.

On the other hand, it makes little sense for Ushimaru to have abandoned Onimaru and left Wano, the country he had tried so hard to save.

If he’s alive, the reason he fled or went into hiding has to be more urgent than heading straightaway to fight Kaido again.

I think in the period that Ushimaru was presumed dead, he sought out a Mythical Zoan-type Devil Fruit to become stronger than Kaido. This also explains how he could jump up the ranks to become an Admiral.

This reasoning would also take care of the accusation that the silhouette of Ryogukyu is nowhere near the same as that of Ushimaru. Given the timeline, they would also logically differ in terms of age, height, frame, and build.

It’s common knowledge that the Admirals’ appearances are based on Japanese actors; Ryogukyu in particular, is said to be based off Yoshio Harada, who looks nothing like Ushimaru.

According to me, all these discrepancies can be solved if you take into account a Zoan Devil Fruit.

Additionally, if Ryogukyu has managed to Awaken the Zoan Devil Fruit, it would account for his larger beast-like structure and also how he could abstain from eating food for 3 years.

We don’t know the full extent of what an Awakened Zoan looks like; we only have the Jailer Beasts to fall back on for reference.

Maybe Green Bull could control the Awakening and morph into a beast only physically, refraining from letting it affect his mind as an Awakened Zoan.

Another point of contention is the laughter of the two characters in the manga. The Admiral’s laugh in the manga is “Ra Ha Ha”, while Ushimaru’s was “He He”. Yes, I’m aware I might be reading too much into this.

But, c’mon, the One Piece fandom is known to be extra. Again, this aspect too could be written off as an effect of Devil Fruit.

The “Ra” can also be interpreted as “Revolution Army”, though what this has to do with Ushimaru is a mystery.

This would take care of the age factor; Ushimaru was technically from Roger and Oden’s era, and it wouldn’t make sense for an Admiral to be as old as Garp.

So, either Shimotsuki Ushimaru has found a way to go back to his youthful glory days with a time-based Devil Fruit, or this is Ushimaru’s son – or some kind of ever-young clone.

In the most recent One Piece SBS, Volume 101, Oda explicitly reveals that “Ushimaru is not Zoro’s dad.”

But this does not mean that Ushimaru and Zoro do not have a connection. They are both Shimotsuki, and are somehow related to Shimotsuki Ryuma.

Oda elaborates in the SBS that he was going to include a scene in the manga which would thicken the plot about how Ushimaru and Zoro are very similar in terms of looks.

After Oden is executed, Oda was going to show Onimaru stealing Shusui from Zoro but being shocked by Zoro’s striking resemblance to Onimaru’s “late” companion, Ushimaru.

Oda adds a cheeky comment at the end of his SBS reply, saying, “They really do look alike, huh?”

In Yamato’s flashback, Kawamatsu remarks that Zoro, despite being a pirate from across the seas, is the spitting image of the daimyo of Ringo in his youth.

Not just this, his sword style is akin to Zoro’s, what with his dual-sword technique, and hunched-over lunging posture. Kawamatsu also says that it is fate that caused Zoro to return Shusui, the sword of the great Ryuma, back to Wano.

Zoro’s connection to Ryuma has been emphasized multiple times, including the fact that after the time-skip, Zoro becomes a one-eyed swordsman, like sword God, Ryuma.

Ushimaru, after being captured by Kaido, is shown to wear bandages that covered his left eye.

Countless other parallels can be drawn between the Ryuma, Zoro, and Ushimaru. Even though Oda has told us that Ushimaru is not Zoro’s dad, he definitely has to be either his grandfather, his brother, or his uncle.

The bottom line is, some avatar of Ushimaru (or his son) has likely returned as Admiral Green Bull/Ryokugyu and has a strong undeniable connection to Roronoa Zoro. 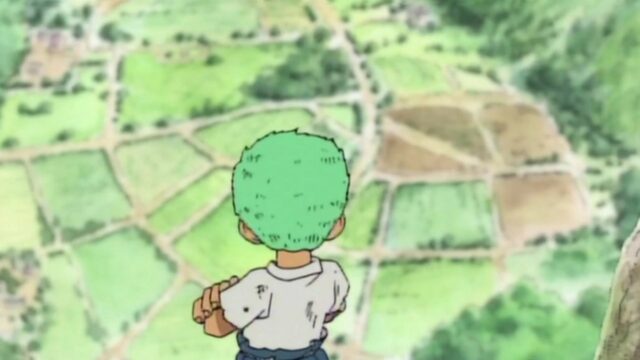 Zoro’s Ancestry Revealed: Is he a descendant of Ryuma and the Shimotsuki clan?