Tengen Uzui is an eccentric and flashy individual, always wanting to be “flamboyant.” He even calls himself the god of flashiness and festivals.

Being the Sound Hashira of the Demon Slayer Corps, Tengen Uzui is a very powerful and skilled swordsman and combatant.

Just like how “Beast Breathing” of Inosuke is derived from “Wind Breathing.”

His physical abilities are also way beyond that of ordinary human beings. Being a Shinobi also adds to the account as he has immense strength and stamina. He is the fastest runner out of all the Hashira.

Tengen could even match the fight proficiency of both Daki and Gyutaro, both of which are Upper Rank 6 demons. He effortlessly decapitate Daki without her realizing it, to the point that he didn’t see her as an Upper-Rank demon at all.

Impressively, he fends off the combined efforts of Daki and Gyutaro while being infected by a poison that would kill someone instantly under normal circumstances. Not only that he even managed to protect innocent lives in the process.

He has also showcased great skill and accuracy in using explosives, minimizing damage dealt with the surroundings, and maximizing the harm dealt with his opponents.

His sharp sense of hearing helped him greatly during his battle with the Upper Moon.

Even after losing his left arm to Gyutaro, he was still able to keep up with the Upper Rank’s movements with one arm, further epitomizing his extraordinary fighting expertness.

Tengen Uzui is very strong to the point where he can fight two Upper Moons at once while saving lives. His swordsman and abilities can rival out his opponents.

The fact that he did all this without the demon mark just shows how strong he is.

Is Tengen Uzui stronger than Rengoku?

Both Tengen and Rengoku are extremely strong. Nevertheless, compared to Tengen Uzui, Rengoku Kyojuro was by far stronger than Tengen in every aspect and to all the abilities they both had shown in the series.

Rengoku mastered Flame Breathing. It is one of the breathing styles which is prestigious enough to be deemed a Hashira candidate material regardless of one’s age.

If Tanjiro wasn’t there, Tengen could have been killed just like Rengoku but fortunately, he just lost an arm and an eye.

On the other hand, Rengoku fought very well against Akaza without help from anyone. Rengoku almost cut down Akaza despite severe injuries.

If Rengoku was given at least a few more seconds to hold him, Akaza would certainly die from the sunlight. This just goes on to show how strong Rengoku was.

Tengen and Rengoku are truly dominant swordsmen but if there is a chance that they will fight, Rengoku is likely to win.

Is Tengen the strongest Hashira/Demon Slayer?

Even after losing his left arm in the fight against the Upper Moon, Tengen was still able to keep up with the Upper Rank’s movements. With just one arm, Tengen fought his war like a true warrior despite not being the strongest Hashira.

How many wives does Tengen Uzui have?

Tengen Uzui has three hot ninja wives Makio, Suma, and Hinatsuru. All three of them married Tengen seemingly at the same time. Tengen holds a large amount of respect for his wives and cares about them deeply.

He instructed his wives to value their own lives first, innocent civilians second, and his own last, even though it completely defied their ninja training.

Makio and Suma do not possess any form of superhuman abilities. Both being raised as a kunoichi, they possess some form of shinobi skills.

Both are capable of wielding a kunai as well as performing maneuvers and fighting much more proficiently than regular people can.

Hinatsuru fares a little better than the other two wives’ of Tengen when it comes to shinobi skills. She is not only able to wield a standard kunai but also a wisteria-laced kunai.

She can also use a large crossbow. In the battle against Gyutaro, she uses the large crossbow to fire a barrage of kunai to slow down the demon regeneration. 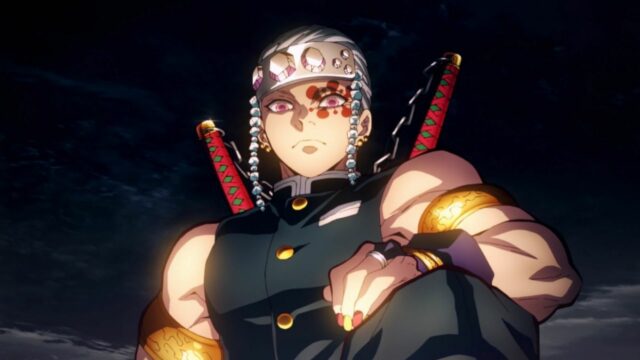