Throughout the history of cinema and entertainment, vampires have taken many forms.

From blood-thirsty monsters to glittering fairies, the many avatars of vampires always seem to draw a lot of attention towards them. Hellsing provides yet another take on these dreadfully enticing creatures.

Alucard, one of the protagonists, is a callous vampire who hunts his own kind. He treats killing as an art and takes pleasure in ending the lives of the vampires who endanger humanity.

Alucard is powerful and invincible, and even though we always know the outcome of a fight, it is exhilarating to watch Alucard demonstrate new limits to his strength.

Looking for crazy and bloody battles? Your search ends here! Watch Hellsing and indulge in fights beyond the human realm.

3. Can you watch Hellsing Ultimate without watching Hellsing (2001)?

You can definitely watch Hellsing Ultimate without watching Hellsing 2001. Hellsing Ultimate is not a sequel to the original series. Instead, it is a reboot of the same. It is highly recommended that you watch Ultimate first since it stays true to the manga.

Hellsing is an older adaptation of the Hellsing manga. The anime does not stick to the original manga story and becomes a bit of a mess in the execution of its story.

Hellsing Ultimate sticks to manga and has superior quality in terms of story, narration, and animation.

There isn’t a specific watch order for Hellsing, although we recommend you watch Ultimate first.

Hellsing Ultimate is every that the original couldn’t be. The characters are more fleshed out, the pacing is consistent, and the action is superior.

Watch the Specials after completing Ultimate.

In an alternate version of London, there exist vampires as threats to humanity. Hellsing is an organization hellbent on vanquishing these creatures of darkness. Fairbrook Wingates Hellsing, the head of the organization, has an enormous army and a single monstrous weapon, capable of colossal destruction, Alucard.

Alucard is a vampire with a massive bloodlust for his own kind. On one of his missions, he ends up severely injuring a human woman, Seras Victoria, in order to kill a vampire. He then turns her into a vampire to save her life. Victoria becomes his servant, and together they fight against those who oppose Hellsing. 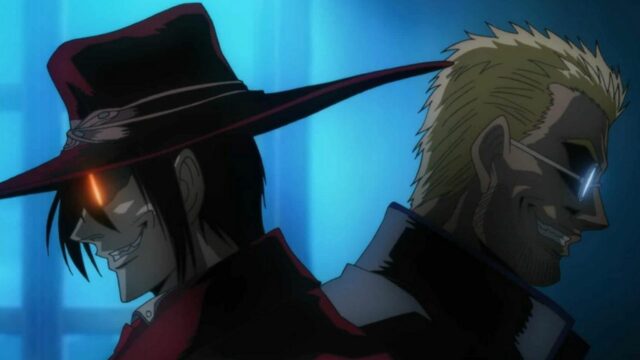