Given is a manga series written by Natsuki Kizu in 2013. It is an ongoing series and has been collected into 5 tankobon volumes so far.

The series was adapted into an audio drama in 2016 and an 11-episode TV anime by Lerche in 2019. A movie sequel produced by Blue Lynx will be releasing this August 2020.

The anime aired on Fuji TV’s Noitamina programming block and was the first yaoi anime to do so.

At the end of the anime’s final episode, it was announced that a film would drop in 2020. This announcement was in September 2019 and the movie was originally scheduled to be released in May 2020.

Its official Twitter account has confirmed that the Given movie will premiere on August 22, 2020. It will be streamed worldwide on Crunchyroll. The cast and crew of the original anime series will resume their roles for the movie.

The preview video for the movie Given releasing on August 22, 2020. Theme song ‘Only For Us’ is released for the first time! It is a close-up of the painful relationship between Akihiko, Haruki, and Ugetsu.

Given is the ‘first anime based on a boys’ love manga’ to air on Noitamina. The development of the film was later transferred from Noitamina to Blue Lynx, which is Fuji TV’s yaoi anime label launched in 2019.

Now that we know the film is coming in less than a month, let’s discuss the trailers and plot. Read below to know all the information about the Given movie.

Due to the Covid-19 outbreak, a lot of delays occurred in the schedule of several anime and series, and Given was no exception. As a result of the pandemic, the movie was postponed to release in spring.

Though it was announced that the Given movie will release in May 2020, it was rescheduled to broadcast on August 22. Crunchyroll will be streaming the 1-hour movie.

The anime adaptation was well received by critics on Anime News Network and Crunchyroll. They praised the emotional writing, soundtrack, and lighting designs among other things.

Given has caught the eyes of many fujoshi and fudanshi fans worldwide. The anime has a solid rating of 8.2 on IMDB and 8.27 on MyAnimeList.

With a sequel film coming out in 2020, now’s a good time to give in to what Given has to offer. There is a lot of popularity gained by the franchise in just one season of romance between a shy singer and his bandmate.

Read ahead to dive into the angst-filled relationship of the other two bandmates of the group – Haruki and Akihiko.

Let’s look into the technical details of this upcoming anime to check what influences the production of ‘Given the Movie’.

Lerche is the studio which produced the anime series and the Given film as well.

Lerche has a history of producing anime with an art style compatible with its story. So they don’t have a particular trademark style as compared to other studios like KyoAni and A-1 Pictures.

The art styles of all the above-mentioned anime are different from each other. The color palate of Hanako-kun and the designs are completely unrecognizable from Assassination classroom.

Given was initially broadcast on Fuji TV’s Noitamina but the development of the movie was transferred to the ‘boys’ love exclusive’ subsidiary of Fuji TV. Twittering Birds Never Fly was the first anime to be produced. Given the movie will be the second.

Hikaru Yamaguchi is the director of the film. She has other works like Tactics, Osomatsu-san, and ClassicaLoid under her belt.

The anime is very reserved in animation. But the animators pulled through in the 9th episode with the audio and visuals. With a mix of CGI, the characters look the way they sound when they play their hearts out.

Lerche paid close attention to the smallest details like when the characters blushed insignificantly or reacted to a scenario. The art style remained true to the manga despite the original creator not working on character designs.

Looking at the anime’s ratings on popular platforms, it seems like Given was loved by the fans.

Given is adapted from the popular yaoi manga written by Natsuki Kizuu. When it first aired, the series blew among female fans on social media, who praised its mix of music, visuals, youth, and more specifically, BL.

All the characters, main and supporting, are interesting and lovable. The voice actors did a great job by adding so much life in them.

The theme of the anime romance, is at the end of the day still romance, regardless if it’s for the opposite gender or the same. Given addresses, the cute awkward moments of ‘gay panic’ Ritsuka has during his interactions with Mafuyu that the fans very willingly gobble up.

The best thing about this anime is that the main couple has a great relationship dynamic – which is not portrayed as the other problematic ones as the usual BL tropes do. Mafuyu and Ritsuka are cute and it is refreshing to see their emotional turmoil, while playing for a band together, as the show goes on.

The rule which Ritsuka himself enforces on the band, ‘One should not bring love into the band’, is broken by him as he asks for blessings from Haruki. However, the series also focuses more on friendship and the passion they collectively have for music.

Given is a generally charming and entertaining effort that leaves you wishing it had been even more. You would regret not watching it before the movie releases.

With the way, it is presented to the viewers, Given just so happens to be a romance anime with lots of good musical elements in it. However, it is a music anime, so the music in it is obviously top-notch.

The attention to detail shown in the anime, whether it’s the animation when characters play instruments or the sound itself, feels as if a real band was performing live or practicing backstage.

The song in the 9th episode expressed everything to the viewers that made the song experience so heart touching, from the build-up to the way Mafuyu sings and conveys his emotions is the highlight of the season.

The series has 4 original songs: opening theme ‘Kizuato’, ending theme ‘Marutsuke’, Session, and Fuyu no Hanashi (A Winter Story). All 4 were composed and performed by Centimillimental.

Centimillimental is a solo project by the programmer, songwriter, composer, arranger, guitarist, and pianist Atsushi. He started using the name Centimillimental in 2018 after releasing the EP ‘Twilight Night’.

The anime is very popular, but the manga is only 5 chapters past the arc the movie is going to cover and hasn’t been updated.

There is no official news regarding an anime sequel for Given, but we can anticipate a comeback after the movie. The manga had some updates in 2019, but it has an irregular schedule.

If the movie gains enough attention and good reception, the author will be forced to produce more content regularly.

A stage play adaptation of Given was announced in April 2020 to be staged in Tokyo, Kyoto, and Osaka theatres from August 15 to September 6, 2020.

The play will be directed by Fumiya Matsuzaki and the Given anime screenplay writer Yuniko Ayana.

A teaser visual was released officially. It shows Haruki and Akihiko relaxing together.

Another visual shows the characters the movie would focus on.

The cast would be returning for the movie.

The official movie trailers have been released. With many sensational scenes from the TV series and a few from the new movie, it is hugely hinted that the movie will focus on Haruki and Akihiko, and everyone’s passion for music.

The credits at the end announce that the movie will release on August 22, 2020.

The series follows a group of students in an amateur rock band, and the dual romantic relationships forming between the guitarist, Ritsuka and the main vocal, Mafuyu, and between the bassist, Haruki and the drummer, Akihiko.

The anime starts with Mafuyu stepping out of his apartment clutching a guitar in his hands. While taking a nap in a quiet spot on the gymnasium staircase, he has a chance encounter with Ritsuka.

Ritsuka berates him for not taking proper care of his guitar, and noticing his knowledge with the instrument, Mafuyu asks him how to play. Ritsuka eventually agrees and invites Mafuyu to meet his bandmates: Akihiko and Haruki.

After hearing Mafuyu’s voice, the others offer him the role of the main singer of the band. With the support of his new friends, Mafuyu must not only learn to play the guitar but also come to terms with his past.

Given is a story of an introverted high school student in his musical journey, the road inspired by his bandmates and old friends. At first, the story is very vague but branches out to other characters and Mafuyu’s mysterious past.

Watch Given on Crunchyroll

The Given movie is the direct continuation of the anime series. While the TV animation focuses on Ritsuka and his high school classmate Mafuyu’s relationship, the film will be different.

The movie will center on the older members of the cast Haruki, Akihiko, and Ugetsu and depict their bitter yet passionate love triangle.

The teaser visual of the movie ‘Give has been released! The colored scenery suggests the relationship between Haruki and Akihiko! The movie will release in Spring 2020.

The following are the cast and staff members for the Given Movie:

Somehow the guitar he used to love to play and the basketball games that he found so fun just lost their appeal…that was until Ritsuka Uenoyama randomly met Mafuyu Sato.

Ritsuka had started losing his passion for music until he heard Mafuyu sing for the first time. The song resonates with his heart and the distance between them starts to change. 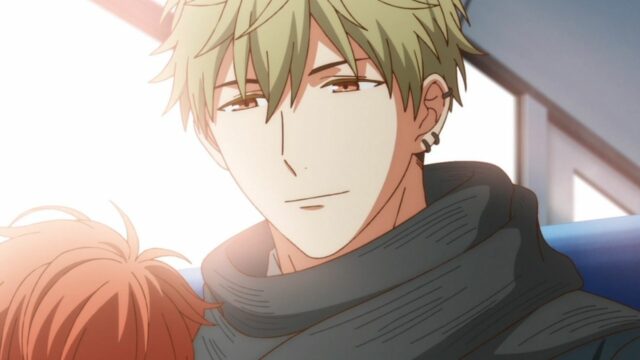